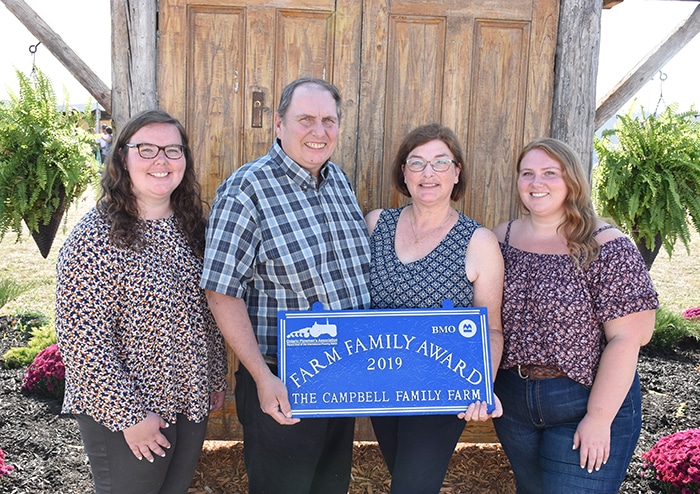 Paul, Janet, Stephanie and Sarah Campbell were honoured at the IPM as one of the 11 BMO Farm Families from across the province.

Paul Campbell grew up on his father Lyle’s 150-acre farm in Chatham-Kent. After attending Ridgetown College, he came home to help farm with his dad and brother.

Paul married Janet McFadden in 1991 and bought the farm from his father in 2014.
The farm primarily grows cash crops of corn, soybeans and wheat on 500 acres of land.  Conventional tillage is used along with satellite positioning via GPS for spring operation with the goal of continuous soil improvement.

Dedicated to agriculture and the rural way of life, 11 families received the 2019 BMO Ontario Farm Family Award on Sept. 21 at this year’s IPM. This award, handed out by BMO Bank of Montreal in co-operation with the Ontario Plowmen’s Association, recognizes recipient families’ focus on sustainability, community involvement, land stewardship and adaptability in their farm management practices.