Several residents along Erie Shore Drive fear they have lost their homes after high winds last night send waves pounding ashore. Others were encouraged to evacuate, as Hydro One crews prepared to cut power to their homes.

Chatham-Kent Mayor Darrin Canniff has declared a state of emergency for the area.

Trevor Dixon has lived on the east end of the road for the past 31 years. He said he’s never seen conditions so bad.

“I’ve never had water in my home before,” he said. “The storm surge pushed so hard the septic started bubbling up under my toilet. We had floating floors.”

That began about 2 a.m. and the waves kept pounding.

He and his wife Leslie and their children worked to get as much off the floor as possible as the water continued to flow into the house “from every crack,” Dixon said.

“We saved some family mementos,” he said.

Dixon’s wife Leslie said the entire ground floor is “demolished,” and it is up to the insurance company to decide if the home is a write off.

South Kent Coun. Trevor Thompson said he visited Erie Shore Drive this morning and understands residents’ frustration, as other people may not comprehend the problem.

“I’m dying a thousand deaths here. In general, it’s kind of a nice little day out there. And these folks are suffering,” he said. “It’s not terribly windy. It’s breezy. But it has come to this.”

With historically high water levels on Lake Erie, when the wind blows out of the south-southwest, the waves drive directly on short in the area and flood properties, as well as the roadway.

“I don’t know what it’s like for these homeowners to watch their homes being absolutely hammered by the lake,” Thompson said.

Dixon answered for the councillor.

Dixon believes the municipality has done next to nothing to help the residents of Erie Shore Drive, while collecting premium tax dollars for years.

“There is no shoreline protection plan in Chatham-Kent. They just shrug it off,” he said. “It’s like, ‘We’re going to tax you $12,000 a year to live there but we’re not going to help you.’”

“All they do is drive down the road in their white truck and give a little wave. That doesn’t help us,” she said.

Thompson said municipal attempts to divert the water along the road into specific runoff points have failed.

“It has just washed away just like we expected it to,” he said of erosion control measures. “All the material designed to prevent the erosion is all washed away. All the work we’ve done to date has been almost meaningless. It’s just really frustrating.”

Leslie Dixon said the waves pushed stones placed by the municipality along the shoreline up onto their lawn.

Her husband said better shoreline protection was in place 31 years ago.

“When I bought this house, the waves rolled on 50 feet of beach. A wood jetty system caught the sand. It’s all gone,” he said of the sand and the jetties.

Thompson said more needs to be done, but wonders who will or can pay for it.

“Residents can’t afford to protect their properties. The municipality can’t afford to take this on. Senior levels of government are not stepping up at this point,” he said. “There always seem to be programs here, some funding there, but we’ve had little more than conversations. I don’t know what we’re doing wrong or how we go about this. Every time we approach them for funding, it’s just not there.”

Meanwhile, Dixon said it is a seemingly never ending cycle through which the residents suffer.

“Here’s the big kick in the groin, they may fix this all up and it could just happen again in a month,” he said.

On Tuesday, Emergency crews were going door to door to assist with the evacuation.

Municipal officials say due to current conditions and the possibility of continued road deterioration, the water supply in the area may be affected. Water pressure will be reduced to protect the line and the roadway in the event of a failure. The reduction in pressure will not affect drinking water quality, however, water will be regularly monitored for quality assurance. In addition, other utilities may be impacted as conditions warrant.

According to the Lower Thames Valley Conservation Authority, wind speeds and direction are expected to continue throughout the week and the weekend. 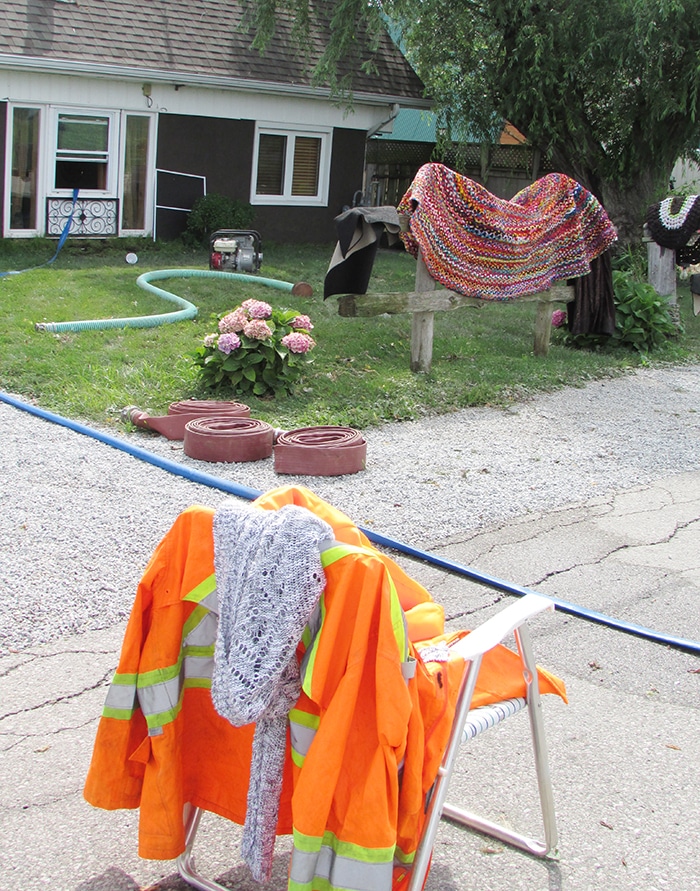