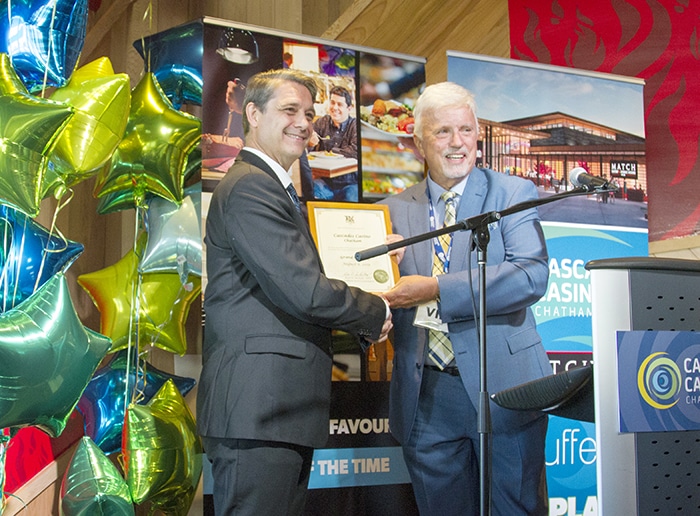 The Richmond Street casino and restaurant complex is a $36-million investment in the community by Gateway. It brought with it 200 new jobs, 300 slot machines, 10 gaming tables and two new restaurants.

The new casino is the first Cascades version in Ontario, according to Gateway officials, and the first Gateway operation built from the ground up.

The company has three other casinos in Ontario at the moment, and all are in buildings that existed prior to Gateway coming on board.

Steve Rowbotham, General Manager of Cascades Casino Chatham, said he’s proud of everything that has been accomplished.

On top of the 200 new jobs, 100 people migrated from the Slots at Dresden to the new facility.

Mayor Darrin Canniff said Cascades is a win-win for the municipality.

“It’s great. Two hundred jobs created and it’s another reason for people to stay in Chatham-Kent,” he said. “There will also be additional OLG (Ontario Lottery and Gaming Corporation) money that will flow from this facility.”

The OLG donates a portion of its profits to host municipalities. On Aug. 8, that translated into a quarterly check to C-K from the OLG to the tune of $884,638, which was presented to the municipality at the facility. 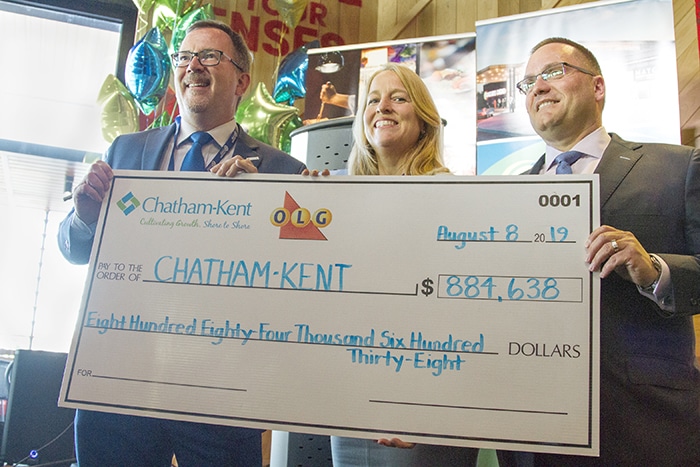 On behalf of the municipality, Mayor Darrin Canniff, left, accepts a check for $844,638 from the Ontario Lottery and Gaming Commission’s chief operating officer Lori Sullivan, and Gateway Casino’s chief administrative officer Bradley Bardua at the grand opening of Cascades Casino.

Chatham-Kent Leamington MPP Rick Nicholls said he sees Cascades as an excellent business opportunity and a benefit to Chatham-Kent. He pointed out the customer service at the facility is first rate.

Hope, in attendance for the opening, called the new facility a success story.

“Some communities lost casinos and lost employees. We gained a bigger casino, more jobs and more entertainment,” he said.

Hope also reminded folks to know their gambling limits and play within them.

“It all boils down to being responsible when gaming,” he said.

Sullivan said Cascades represents a long-term investment by Gateway in the province, and is a significant milestone in the modernization of gaming in Ontario.

Gateway CAO Brad Bardua said Cascades in Chatham represents a facility designed to accommodate everyone in a family. Although people under 18 cannot be in the casino portion, they can enjoy the two restaurants, Match Eatery & Public House and The Buffet.

“Our restaurants are family friendly. We’re not a casino company, we’re an entertainment company,” he said.

Bardua also credited the municipality for working with Gateway through the project.

“If there were such a thing as a blueprint for how a municipality can work with a company, it is right here,” he said.

Bardua said the employees are “the heart and soul” of the operation and added they were “knocking it out of the park.”

Part of their tasking is to choose charities and groups that would benefit from the GatewayGIVES program. The staff selected the Chatham-Kent Hospice Foundation as the sponsored charity for the facility’s grand opening month.

As such, the hospice foundation will receive $2 from every Tropic Thunder pizza sold in Match, and $1 from every Sons of Kent draft beer sold between now and Sept. 6.

On hand at the grand opening Aug. 8 was a delegation from North Bay, where Gateway is planning a $31-million build, as well as London city councillors, as that council recently granted approval for a $75 million Gateway Starlight Casino. 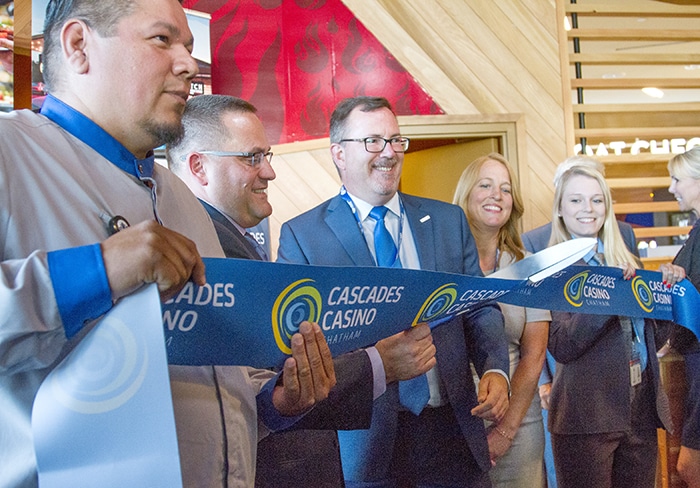