The International Day to End Trafficking in Persons July 30 was a fitting day for more than 150 people to come out and support the culmination of Project OnRoute, designed to raise awareness of the issue of human sex trafficking along the Highway 401 corridor.

At the Tilbury OnRoute South location, politicians, police services, community and women’s groups and the public gathered in support of the Courage for Freedom organization campaign to raise awareness of the fact the 401 corridor is used to transport young women and men to different locations where they are forced to provide sexual services to johns for money. In Canada, 80 per cent of victims are Canadian citizens, organizers reported to the crowd.

The Tilbury OnRoute location was one of 11 across Ontario to air a public service announcement for the final time on Tuesday as part of the #ProjectOnRoute campaign that had the potential to reach more than 16.5-million views across the province. That campaign is being replaced by a similar initiative called #ProjectMapleLeaf, slated to begin on the next National Human Trafficking Awareness Day on Feb. 22, 2020.

Anne Roy, a member of the Catholic Women’s League, helped organize the event and said awareness in the media is spreading to the public and more is needed to protect our young people from traffickers who lure them from their communities and force them into the sex trade.

Essex OPP detachment commander, Insp. Glenn Miller, was on hand and spoke passionately about what he said is one of the “most heinous crimes that we have – it’s modern day slavery.”

“Sadly, as we are standing here today, behind me on the 401, I can assure what has passed by is several victims of human trafficking. That’s our focus, that’s our mission,” Miller said to the group. “Law enforcement across the 401 and across our communities are seeing it every single day.”

Miller said the most powerful tool the public holds is their eyes, and if they see something that doesn’t look normal, he encourages people to call 911 and report the information to police. Crime Stoppers is another option for people with information to provide who want to remain anonymous.

He added law enforcement, victims’ groups and the courts have matured in their handling of human trafficking to give victims’ confidence they will receive the help they need without judgment.

Sgt. Kimberly Miller with the Chatham-Kent OPP detachment works on human trafficking cases and said that the public can help by looking for signs that a person may be being trafficked, often led by the feeling that something just isn’t right, including:

If possible, the public can take down licence plate numbers and discretely take photos to give to police, however, approaching the victim or trafficker is not advised for everyone’s safety.

Raising awareness about trafficking and how it happens has several goals – eradicating the crime in our communities and country, providing the needed services and supports for victims/survivors, and keeping an eye on our teens so they don’t become victims.

Sgt. Miller said they are indicators the public can look for at home, at school and in the community to identify a young person who may need help.

She said indicators that parents, friends or teachers may see with our youth could include:

Awareness is the key, according to organizers, who said with public help, police can work so traffickers won’t be able to hide in plain sight, and, eventually, will have to close their operations.

More information on Courage for Freedom can be found at www.courageforfreedom.org, and information for victims and tipsters can be accessed by calling the Canadian Human Trafficking Hotline at 1-833-900-1010 or go to canadianhumantraffickinghotline.ca. 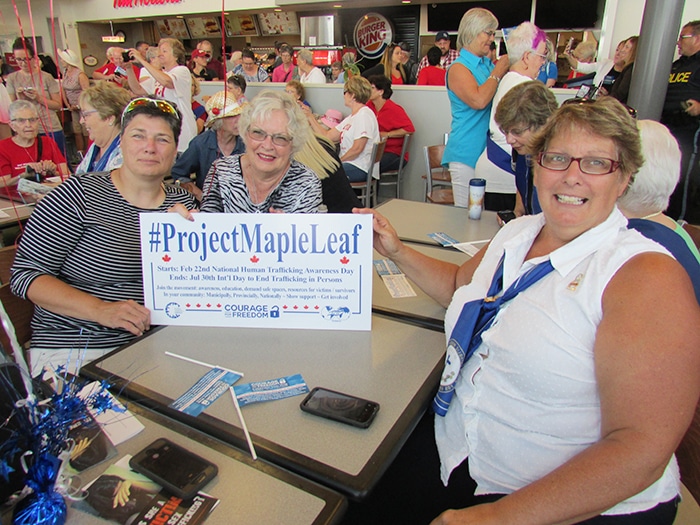