Changing of the East Side guard

Jul 16 • Feature Story, Local News • No Comments on Changing of the East Side guard 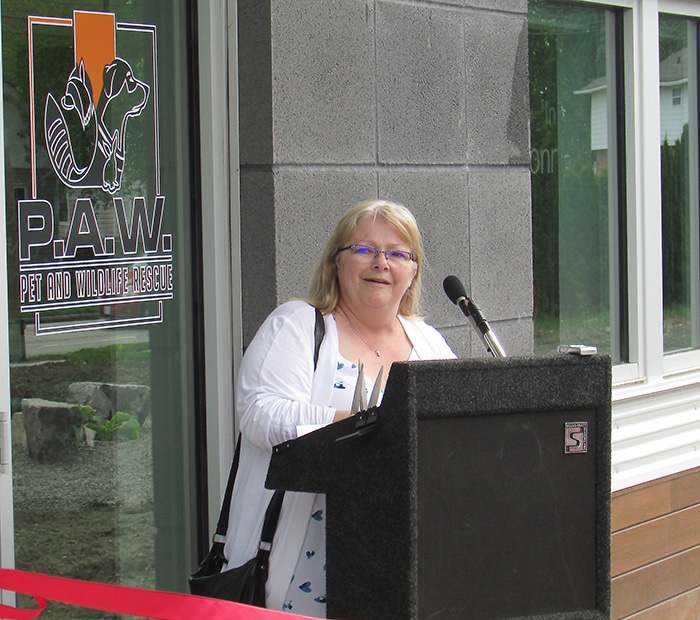 Marjorie Crew, seen here wearing one of her many hats, this time as co-chair of the fundraising committee for the new animal shelter, will step down on Saturday as head of East Side Pride, a group she’s led for 20 years.

Saturday will mark the end of an era of sorts, as Marjorie Crew is to step down as chair of East Side Pride (ESP).

For two decades, she oversaw the group’s operations in helping to make the streets safer in Chatham’s east side.

On July 20, Bev Webster will take over.

The east side has come a long way over the past two decades. Crew remembers how ESP came to be.

“There were just a bunch of bad characters who were running everything. People were afraid to speak up,” she said. “We were witnessing all this stuff. We noticed some people standing on the corner, ladies, they were prostituting. There was a murder behind the Royal Tavern. That was the breaking point,” she said.

A letter to the media complaining about the problems in the east side never got printed, as Crew didn’t want to sign her name. Instead, following a community forum on the matter, she wound up starting the citizens’ group that would be instrumental in cleaning up the streets.

When ESP formed, drugs and prostitution were the big problems, Crew said.

With drug dealers came pit bulls, as the dealers liked the aggressive dogs as a form of security.

Crew said people trained those dogs in the parks.

“Baby swings would be used for training dogs. They’d wrap them around the swing set and train their pit bulls on them,” she said. “They’d be torn to shreds.”

With kids not able to use them, Crew and ESP came up with a simple deterrent to keep the dogs away: hot sauce.

“One evening, we had a bottle of Jamaican hot sauce and slathered it all over the bottom of the swing. The kids wouldn’t use them (the swings), but now the dogs didn’t go near them,” she said. “We just did that a couple of times and it worked.”

Crew recalled all the advice ESP received in its infant stages – most of it telling them they shouldn’t operate in an aggressive manner. And most of the advice came from people who didn’t live in the east side.

“Eventually, we just started doing things focusing on the prostitution stuff. It was so bad that johns would just creep up on anybody. My daughter, who was 14 at the time, was approached numerous times. It was scary,” she said. “One night, a friend was coming to my house and the johns kept bugging her. She was hiding in my bushes and called my house for us to come out and get her.”

Crew said that led to ESP shifting to the citizen patrols at night, being out on the streets in a visible presence and being more aggressive.

“We let everyone know we were reporting everything,” she said. “But we treated people with kindness.”

But it wasn’t simply a matter of deciding to do what’s right and seeing the neighbourhood fall into place. Crew said ESP members suffered through vandalism – rocks through windows, slashed tires.

“It came with a toll. There were a lot of sacrifices. But it was all about building that credibility.”

“It took a lot of time and a lot of partnerships building trust. Building that trust with the police was crucial,” she said, adding she’s worked with every police chief Chatham-Kent has had since amalgamation.

In targeting the prostitution side, Crew said ESP worked with the Crown Attorney’s office to go after the johns, and it paid off quickly.

“The biggest turnaround was almost instant. We had been working on drugs, prostitution and a lot of things, but the prostitution stuff – we’d follow them through the courts. We followed the johns.”

ESP took such efforts against the johns to the streets too.

“We started knocking on their (car) windows. We’d ask what they were doing and said we would forward their license plates to the police,” she said. “And one day we looked around and said, ‘Where’d they all go?’”

ESP has come a long way, just like the east side it helped transform. Once known as the hooker patrol or the john patrol, ESP is heavily involved in the community in other forms. They began running hayrides and other events. Today, they hold their annual Breakfast with Santa at the WISH Centre, do a children’s coat program in sponsorship with local businesses, hold fundraisers, sponsor children on sports teams and even sponsor a kids’ camp.

“Our goal was to make it a safe place for people to live and visit,” she said. “I think we’ve accomplished that for the most part.”

A key sign is how children can enjoy just walking around the neighbourhood.

“Our kids grew up with all of this. We had to worry about them being approached by characters, being offered drugs. But my granddaughter can walk anywhere she wants and we don’t have to worry,” Crew said.