Everybody’s working for the weekend – the Festival of Nations weekend at the end of June in Chatham, that is.

And that includes iconic Canadian rock band Loverboy, who will headline the Festival in its return from a nearly two decade hiatus.

Mike Reno and the rest of the guys from Loverboy perform in Tecumseh Park June 30 at a free concert in the bandshell.

In fact, the Festival activities are all free, according to co-chairs Dava Robichaud and Tracy Callaghan. Much of that is made possible with the help of local sponsorship, including funding from TekSavvy, sponsor of the main stage entertainment.

The three-day Festival (June 29-July 1) celebrates Canadian diversity through the multiculturalism that has made Canada the best nation in the world in which to live.

The event will begin with a Festival of Nations Parade June 29 at 11 a.m. Tecumseh Park festivities will start at noon.

“We will have a wide variety of local multicultural performing groups playing throughout the afternoon and evening, the kids’ zone will be in full swing and we’ll have vendors and attractions in the park until 11 p.m.,” Robichaud said. “This will be two-and-a-half jam-packed days.”

A citizenship ceremony is planned for Saturday afternoon.

Cultural food booths will be set up inside the Chatham Armoury each day of the event.

“Rediscover and embrace some of the cultures of Chatham-Kent,” Callaghan said.

Chatham-Kent Mayor Darrin Canniff said he’s happy to see the Festival of Nations return to Tecumseh Park, and anticipates the weekend to be “absolutely huge.”

Canniff said Chatham-Kent is home to a wide variety of different cultures.

“There are 58 languages spoken in Chatham-Kent. We would love to have all of them represented at Festival of Nations,” he said. “We are an accepting community and we want to showcase that.”

“All of us are immigrants from one decade or another,” she said.

And for the people who preceded most of us here, Robichaud said First Nation peoples will be represented in the opening ceremonies and will dedicate the land and give blessing. Additional involvement for local First Nation communities is also in the works.

No weekend bash is complete, especially leading up to Canada Day, without fireworks. Those will take place on the Saturday night at dusk at St. Clair College.

On July 1, organizers said they plan on hosting a massive pancake breakfast in the park. And it too is a free event.

Callaghan said while plans are still shaping up in terms of participation, feedback from various cultural groups has been quite positive, and many are reaching out to the organizers.

“The positive energy is phenomenal. There has been lots of support and interest,” she said.

Canniff said the return of Festival of Nations is another big event taking place inside Chatham-Kent.

“This will be a huge event; something we need more of. We want lots of things to do in Chatham-Kent,” he said.

Callaghan said the volunteers organizing the Festival have had some great success reaching out and finding sponsorship to put on the weekend, but they are still seeking more.

The same holds true for volunteers. Callaghan said volunteers will be able to apply online.

The original festival attracted thousands of people to Tecumseh Park during its 13-year run that ended in 1998.

“There were so many good things about the event that we’re using the three themes of Rediscover, Embrace and Celebrate,” Callaghan said. 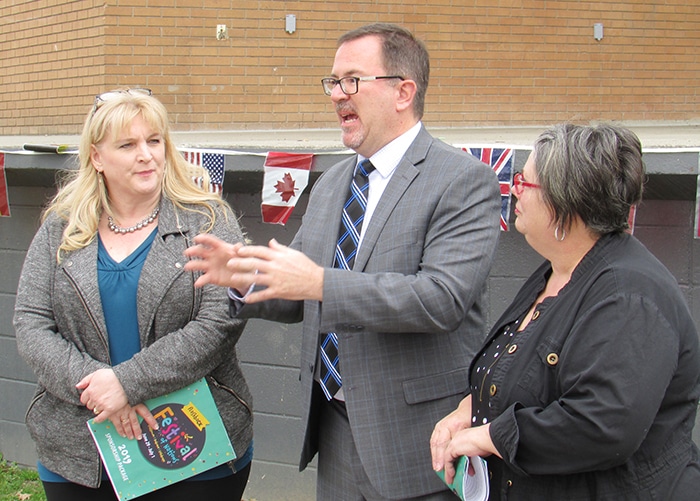