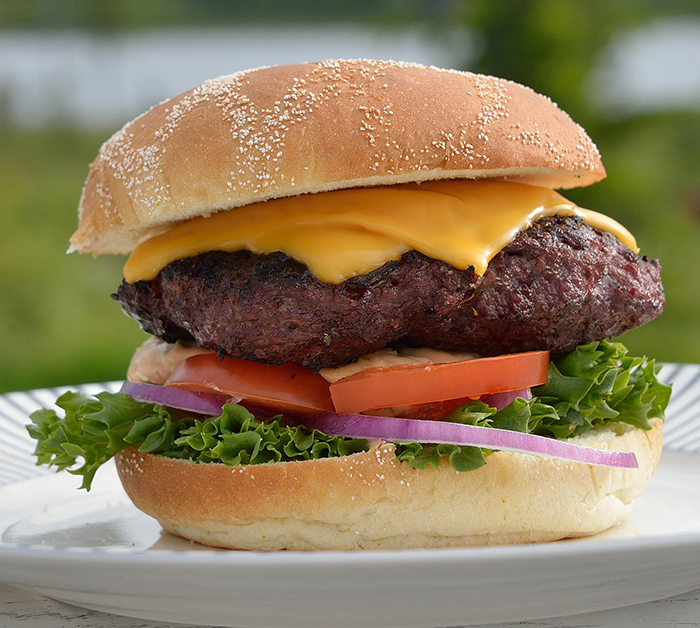 We ate some of the best burgers ever on Sunday, and I had nothing to do with them, except for the dishes afterwards.

Yes, I bet they’d have been even better on the Big Green Egg, but Mary Beth offered to do them on a cast iron griddle inside. Who was I to argue on a cold, windy day?

Most of the credit goes to our daughter, Brenna, who found the recipe online.

I must mention that although I love cooking and creating a variety of dishes on the barbecue, most of the burgers we’ve done have been packaged pre-made offerings. Some have been quite tasty, like the ones you can get from Schinkels’ or Lenovers, while others have simply filled us up.

Brenna’s finding will be repeated again and again.

Naturally, you need ground beef. And these were all killer, no filler, as Mary Beth didn’t use any breadcrumbs or eggs. If you go that route, I’d recommend ensuring you use a griddle or pan over an open grill, in case anything thinks about falling apart.

The stuffing was a mix of cream cheese, cheddar cheese, bacon and chopped jalapenos.

And we added more cheese on top, because, why not?

The burgers essentially melted in our mouths!

We combined them with a salad and some cooked asparagus for a wonderful meal.

Brenna’s boyfriend Matt had the intention of eating a second burger, but reconsidered. He managed to get a second patty into him, but no bun. Ah, teenagers.

We’ve received a neighbourhood update on our cat’s antics. It seems Finn has more than just our household wrapped around his claw-tips.

The not-so-little beggar is well fed at home.

We’ve learned he’s also well fed next door, across the street, and down a couple of homes.

That’s right, Finn’s so friendly he’ll go right up to neighbours and win them over with his purrs. Next door, Cathy will feed him right out of her hand. He’ll also readily accept anything she puts out for her two cats.

Across the street, Finn will hop onto the window ledge at Lynn and Doug’s and make goo-goo eyes with their cat through the window. That often leads to a little food treat as well.

And I’ve learned he’s visiting a neighbour’s garage a couple of doors down, hanging out and accepting snacks there too.

He’s good at squawking and acting like he’s starving. I fall for it regularly when he’s in the house and cat-chatting that he’s very hungry and his bowl is empty.

Except it usually isn’t empty. He’s just an attention hog. A treat here or a treat there is an added bonus.

The thing is, Finn’s a BIG cat. He’ll take over an entire living room chair. On top of that, he’s quite furry, so he looks even larger.

He’s not fat, but he’s certainly not skinny or starving.

Yet, he manages to work the neighbourhood like he hasn’t been fed in days. Or he’ll just turn up the feline charm and trade affection for treats.

I’ve called Finn many things, including stupid, as he’ll sit out in the rain meowing to get in, but he’s also very, very crafty.

He’s a con-cat. Be on the lookout for a large ginger tabby who will readily show love in exchange for food. If he sets the hook once, he’ll be back to reel you in every day.

Lynn recently walked over to say what a great cat we have and that she’s been feeding him.

Who was walking alongside her?

Finn, with a very smug look on his face.