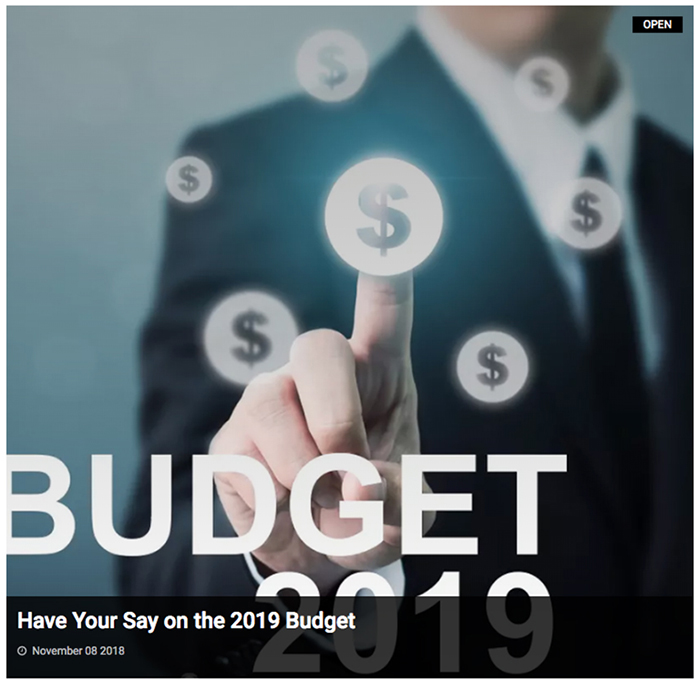 An interesting item popped up in my Facebook feed recently: a request to take a survey to provide input on the 2019 municipal budget.

Sure, I thought, I’d love to give my opinion.

So I clicked on the LetsTalkChatham-Kent.ca link, registered and got started.

I lasted about 30 seconds.

I’d like to think I’m fairly familiar with the budget, as I’ve covered the municipal budget process for years.

But then the survey quickly showed me it was too simple and superficial. Plus, it seemed somewhat tailored.

It asked if I wanted to see taxes and/or services levels increased, left at the same level, or reduced.

I think the municipality does not run as efficiently as it could, so naturally I chose a tax reduction.

It then asked me where I would suggest the cuts to occur, and offered me 22 categories on which I could click, everything from ambulance services to winter control.

And that’s where I stopped doing the survey. If you look at it the way the survey is tailored, it appears as a guilt process. Cut ambulance services? I don’t think so. Children’s services? Nope. Road maintenance? Too many potholes to cut back there. Winter maintenance? Nah.

In reality, I should have clicked on every single box. To me, in some ways, our system is broken, and a big reason I feel that way is the people in charge of that system have spent too much time within it.

I’m talking about experienced, veteran municipal administrators. They’re enmeshed in public service; have been for years. As a result, they may not have the perspective of a typical taxpayer and private sector worker.

For example, two decades ago in the old Kent County, with burgeoning auto and tool & die production sectors, there was no shortage of well-paying blue collar jobs here. And working in the public service usually meant lower wages than what could be earned in the private sector, but someone in the public service enjoyed excellent benefits and pension plan.

Today, those benefits and pension plan remain. What is added, however, is excellent salary. In many cases, a person working for the municipality is making more money than what they would make in a similar position in the private sector, and they enjoy the gold plating of the pension and benefit package.

Many public-sector personnel I’ve shared that with essentially tell me they are entitled to their entitlements. They work hard and deserve their level of compensation.

Spend enough years working inside such a situation and you are immersed in that, and cannot see things from an outside perspective.

It happens elsewhere as well. Look at the auto sector, where people have told me they deserved high wages because, despite the fact the work didn’t require a person to have a higher level of education to work on the assembly line, the work was lousy and therefore better compensation was warranted.

If that’s the case, then people working in landfills, as septic tank pumpers, roofers on scorching summer days, etc. should be paid better than doctors.

That’s not the case, and that means no disrespect to hard-working individuals in these various jobs.

But in the public sector, I believe many people lose sight of operating at the most efficient levels; treating government operation more like a business and watching every penny going out the door. The ability to pay is too often ignored.

Seeing that survey has me wanting more information.

I would love to see a detailed breakdown on how much of $2,821 – the average residential property tax point – is spent in all areas. Where exactly does the money go?

The Facebook post said $12 of it goes towards council and council support, $4 for the office of the mayor.

How about breaking it down into all 22 of those categories listed on the survey, just for starters?

We need more info on the largesse – the inefficiencies.

Go into more detail. How about showing average management salary? Average municipal employee salary? How much we input into gold-plated pension plans?

How do municipal salaries compare to the average salary of non-civil servant personnel in C-K? Don’t compare to other municipalities, but rather the people who pay the taxes that ultimately pay those salaries.

How many people use municipal vehicles for personal purposes? Who has a company vehicle and why? Why that type of vehicle?

For example, why give a manager who makes upwards of $200,000 a year his or her own luxury SUV? Couldn’t a more fuel efficient and lower-priced reliable sedan or smaller SUV do instead?

For the people who are quick to say if the municipality doesn’t offer comparable wage and perk packages to that of other municipalities, we’ll have no one qualified seeking those positions here, I don’t buy that. Factor in quality of life and cost of living. Despite the recent rise in the cost of local real estate, we are a very enticing spot in which people can purchase property. The only complaint about owning property here is … property taxes.

Municipal spending, from stationery and other office expenses, to fleet purchases and salaries, all add up. If everyone, from councillors to front-line personnel treat the spending of taxpayer money as if it were their own, we’d be in a better place.

In a $300-million-plus annual budget, you can hide, intentionally or otherwise, a great deal of inefficiencies and unnecessary perks.