This equestrian program isn’t for your average horse enthusiast. You have to be particularly acceptional to take part.

It’s TJ Stables’ Acceptional Rider program, a charitable therapeutic riding program that has catered to children through adults with disabilities since 1992. It teaches them horsemanship and riding skills.

The fall session at TJ’s is slated to start Sept. 17. This past spring’s session featured about 150 riders.

The Knights of Valour Medieval Jousting Show is a major fundraising program for the Acceptional Riders. In late May, armoured knights showcased their riding skills, and skills with the lance, as horses’ hooves thundered, and knights tried their best to unseat one another in the jousting competition.

Terry Jenkins, who runs TJ Stables, said the Knights of Valour have been supporting TJ Stables for the past eight years. But the funds raised from the show don’t cover all the costs of running the Acceptional Riders program.

“This fundraiser helps the entire program, but particularly for the spring session,” she said.

Families pay a fee to have their children take part, plus there are additional costs that need to be covered.

Jenkins said no riders are turned away, even if a family doesn’t have the funds to pay for the program.

“We take them anyway and rely on the good citizens of Chatham-Kent to help us out,” she said. “There’s always an increased need because more and more people become aware of our program. We don’t want to turn down anyone because of funding issues.”

Jenkins said the support costs for each rider is about $500 per session, with families charged $225.

“Our insurance is crazy for that program. We also need equipment – depending on the particular rider. It has to be hand made,” she said.

Some of that equipment can be quite specialized.

“We have one little guy who can’t sit up straight on the horse, but we designed an adaptive device,” Jenkins said.

Support for the program is large, with a volunteer base of about 80 people. Jenkins said some riders require up to three volunteers.

But to her, it’s all worth it.

“First of all, there’s a high need for recreational activities. And this is a recreational program with therapeutic benefits,” she said. “The therapy end of it is really beneficial for balance, etc.”

The therapy doesn’t just end with the child either.

“Where it’s really awesome is it’s not just for the rider. If you have a child that is always sidelined and has to watch his brothers play hockey and he can now ride, you’ll see the benefits from it. The entire family will benefit,” Jenkins said. “The brothers, sisters and caregivers will come and watch it.

“We have riders who have been coming here for almost 20 years. They’re still coming because they have friends in the program,” Jenkins said. “They met here, but they now meet for bowling and go to the movies together. They’ve really created a social life for themselves.”

Success stories touch all involved. Jenkins said one child who had never uttered a word prior to taking part in this spring’s session, spoke for the first time in early May.

“She has autism. She’s walking along and she started saying the pony’s name. She had never spoken before. Everybody was in tears over that,” Jenkins said. 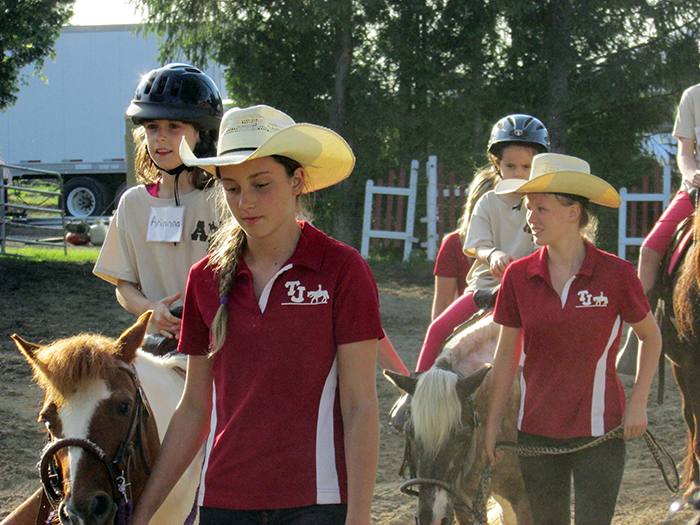