Promising to stop wind turbine contracts, clean house at Hydro One and lower taxes, Doug Ford rolled into Wallaceburg last week to a crowd of more than 100 trying to get into Country Style Donuts.

One of the stops on his tour of Chatham-Kent, the provincial Progressive Conservative leader also visited a farm in Blenheim and attended a rally in Chatham the same evening, attracting close to 1,500 people at the John D. Bradley Centre.

Members of the public waited inside and outside the Wallaceburg donut shop for a chance to talk to Ford and hear what he had to say about local issues such as the concerns with the wind farm projects and water well contamination, making sure the Wallaceburg hospital stays open and repealing the sex education curriculum.

“Because of the wind turbines, we have the highest hydro rates in North America, with a lot of other things that make the hydro rates go up, like the CEO, or the $6-million man as I like to call him, lining his pockets with your hard-earned tax money. Not only lining his pockets, but his buddies’ pockets with $14 million in bonuses and multi-million dollar salaries. The party with the taxpayers’ money is over.”

Ford said in doing research in other provinces, the highest wage paid to a hydro company CEO was $450,000 compared to the more-than $6-million salary paid to the Hydro One CEO Mayo Schmidt last year. In removing Schmidt, the Hydro One board and senior executives, Ford said the cost of paying him to leave is far outweighed by the savings to be made over a four-year term of office.

“We’re going to start respecting taxpayers. We’re going to lower taxes, lower hydro rates, get rid of the worst tax ever – the carbon tax,” Ford said to applause. “Help is on its way for everyone in Ontario. Every policy we make is going to be beneficial to each and every single person in this province. I can’t wait for June 7 to roll around and get this province back on track with your help. Because we can’t do it alone.”

When asked by one Wallaceburg woman about how he was going to get elected versus the Liberal machine in Toronto, Ford said he is counting on rural Ontario to help him make the change at Queen’s Park.

“I have spent the vast majority of my time in the rural areas and it’s about making sure we respect all taxpayers, no matter if it’s the big cities or towns,” Ford noted. “It’s a movement happening that I’ve never seen in federal, provincial or municipal politics in the last 30 years. And as I always say, it’s not about being a PC, Liberal or NDP, it’s about grass roots folks standing up and voicing their opinions, getting out and voting.”

Ford had harsh words about current Liberal Premier Kathleen Wynne and how she is running the province.

“Cronyism and the elite Liberal establishment is destroying this province but they are famous for lining their pocket and feathering their nest. You put your hand in your pockets and you have Kathleen Wynne’s hand in one pocket and you have Justin Trudeau’s hand in your other pocket and all they are doing is gouging the taxpayers of this province,” Ford said to the crowd. “It doesn’t make us competitive when we’re trying to create jobs when we have the highest hydro rates in North America, we have the carbon tax, we have more red tape and regulation than you’ve ever seen in your entire life – we’re going to change that and make it a business-friendly province.”

When asked by business owners how he is going to help them, and why they shouldn’t go to the U.S. where they can reduce their hydro rates by a third, the PC leader asked people to be patient.

“Give us another 48 days and help is on the way. We will make sure we create jobs, lower taxes, lower hydro rates and get rid of the carbon tax. We need the input from people like you and we’re going to get it done,” Ford stated.

In response to questions about health care, Ford revealed some of his party’s plan for creating more space in long-term care facilities for Ontario’s aging population.

“We plan to add 15,000 long-term care beds over the next five years and 30,000 over next 10 years and that’s going to reduce wait times. Rather than listen to a bunch of politicians how to deliver our health care, we are going to listen to front-line people who are in it day in and day out,” he noted.

Chatham-Kent Middlesex MPP Monte McNaughton was at the donut shop with Ford, introducing him to local residents and community leaders.

Ontario voters will go to the polls June 7 and Elections Ontario is encouraging all eligible voters to make sure they are on the voters’ list by going to https://eregistration.elections.on.ca/en/home to confirm, update or add your information. 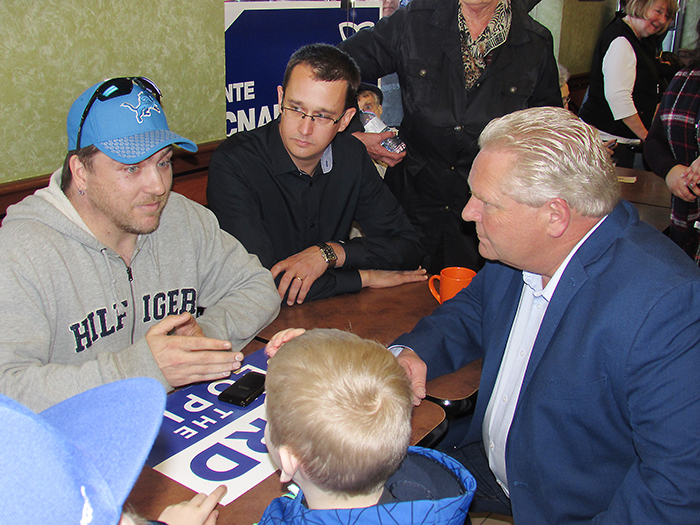