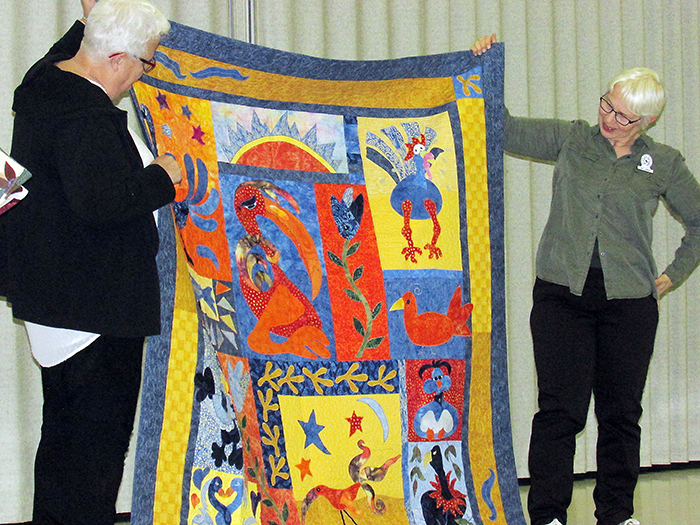 Members of the Chatham-Kent Quilters Guild showcase the award-winning quilt designs of Sombra-area resident and guest speaker Evelyn Evers at a recent event. The colourful quilt shows different birds Evers designed and put together from a Block of the Month project.

If you are interested in learning the art of quilting or are an avid quilter yourself, the Chatham-Kent Quilter’s Guild will welcome you with open arms.

Formed in 1998 and with a current membership of about 130 quilters from all over and all experience levels, the Guild has made a name for itself with charitable works, community projects and, of course, beautiful quilts.

The Guild celebrates its 20th anniversary this year.

Joyce Martin-Bruce, co-founder of the Guild, said one of the current projects is a quilt for the 2018 International Plowing Match. The quilt is made up of 18 squares picked by the Guild members from 36 entries. It will be displayed at the IPM Quilt Show this Aug. 17 and 18.

“We had 36 entries and I didn’t want to be the one to decide so I asked the membership to vote,” Martin-Bruce said. “Our theme for the challenge was ‘We Grow For the World.’”

The Guild meets twice a week, working on comfort quilts for people in the community who are very ill or going through a difficult time, and they also make the Cuddle Quilts for Chatham-Kent first responders to give to children in distress.

Martin-Bruce said the group of quilters also meets the third Wednesday of every month at St. Paul’s Congregational Church at 7 p.m. for fellowship, guest speakers and showcasing the quilt designs of members.

Another project of the Guild that anyone who drives along Longwoods Road and Queen’s Line can see is the Barn Quilt Trail – People of the Thames 1750-1850. Martin-Bruce said the Guild started the project back in 2013 when they were challenged by another group to continue the trail from Thamesville west to the mouth of the Thames River.

According to book put together by the Guild that explains the project, Evelyn Evers, a Guild member, used a quilt program to come up the designs for 30 blocks that would tell the stories of our area, and a committee was born. The blocks were painted and first went up in August of 2015, representing images of local lore such as a lighthouse, gristmill, settler’s barn, corn, the North Star and many others.

Chaired by Heather Loucks, the committee fundraised and also received grants from the Trillium Foundation and the Chatham-Kent Community Partnership. Several area service groups also pitched in, raising the $30,000 needed to complete the project.

Martin-Bruce said a book on the subject, which is available to the public, was sold out after the first 500 so another 500 were ordered.

At a recent meeting, the guest speaker was Evers, who showcased many of her incredible award-winning quilts, such as a colourful design depicting different birds, a hand-quilted Irish chain design, a panda made of 584 pieces of material and an award-winning 3-D design originally from a Russian engineer who also quilted.

Bruce-Martin said many people join the Guild, even those who have never quilted before, and quickly become a fan of the hobby. One member, the only adult male member of the Guild, started only three years ago.

Mike Fallowfield, whose wife is a member, decided to take up the hobby and now does quilts for friends and family members. He has done Harley Davidson and Case tractor quilts for his friends and Frozen characters for the young ones in the family.

Anyone interested in joining the Guild or checking out a meeting can go to ckquiltguild.com/membership/ for more information or leave a message on the Guild Facebook page found at www.facebook.com/ChathamKentQuiltersGuild/. 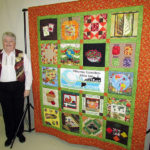 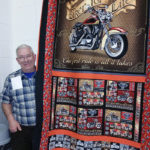 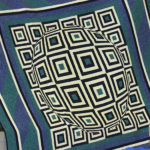 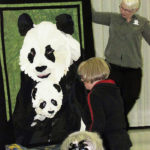 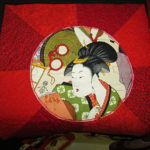 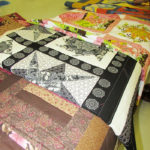 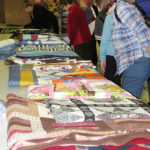