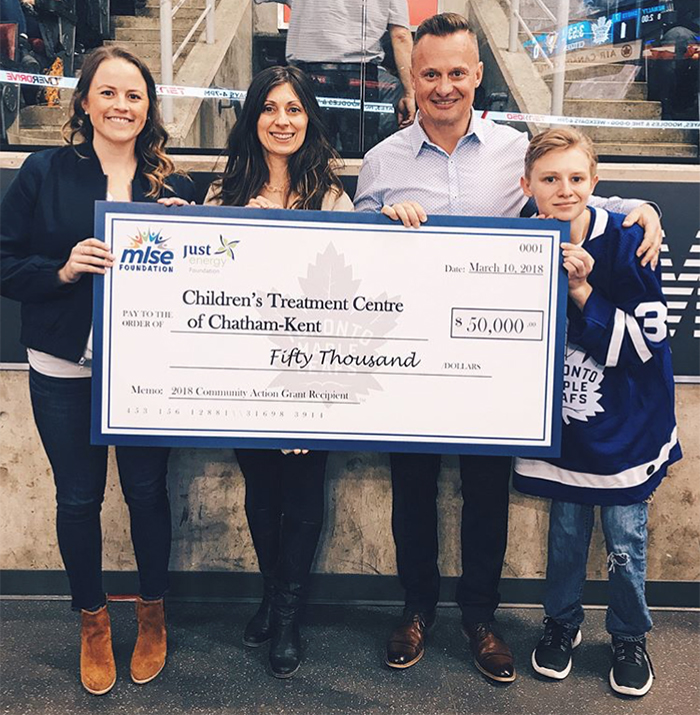 This weekend at the Toronto Maple Leafs versus Pittsburgh Penguins game at the Air Canada Centre, the MLSE Foundation, through its Community Action Grant funded by the Just Energy Foundation, presented the Children’s Treatment Centre Foundation with a cheque for $50,000 in support of their Sledge Hockey and Adapted Skating Program.

The CTC-CK’s Sledge Hockey and Adapted Skating program provides the opportunity for children and youth in Chatham-Kent with special needs to participate in and enjoy the game of ice hockey, skating and be physically active.

Sledge Hockey is the Paralympic sport version of ice hockey, where athletes with special needs are strapped into a two bladed sledge and propel themselves around the ice with sticks spiked at one end, and curved blades on the other for shooting.

“The Children’s Treatment Centre Foundation is thrilled to receive support from the MLSE Foundation, a like-minded organization committed to ensuring all children, of all abilities, can participate in sports and be physically active” said Michael Grail, Chair of the Children’s Treatment Centre Foundation Board of Directors, and parent of Sledge Hockey/Adapted Skating participant in a release. “Their support of the CTC-CK’s Sledge Hockey and Adapted Skating Program allows kids with disabilities in Chatham-Kent to enjoy the game of hockey, just like their peers, to live their best life and reach their full potential.”

In addition to the donation, the MLSE Foundation invited CTC staff, program participants and their families to Saturday’s Leafs versus Pittsburgh game for the cheque presentation. Participants arrived at the Air Canada Centre hours before game time for an afternoon of touring the facility, meeting some Toronto Maple Leafs staff such as Joe Bowen, fist-bumping the Maple Leafs team as they made their way onto the ice, and a meet-and-greet with Darryl Sittler.

“We are proud to award the Children’s Treatment Centre Foundation of Chatham-Kent the Community Action Grant (in partnership with Just Energy Foundation),” said Tanya Mruck, Executive Director of MLSE Foundation. “MLSE Foundation is extremely supportive of programs that go beyond teaching the skills of sport but that harness the power of sport to be transformative for youth of all abilities. The CTC- CK’s commitment to deliver specialized and adapted programming is an excellent example of how sport can and does enhance communities across Ontario.” 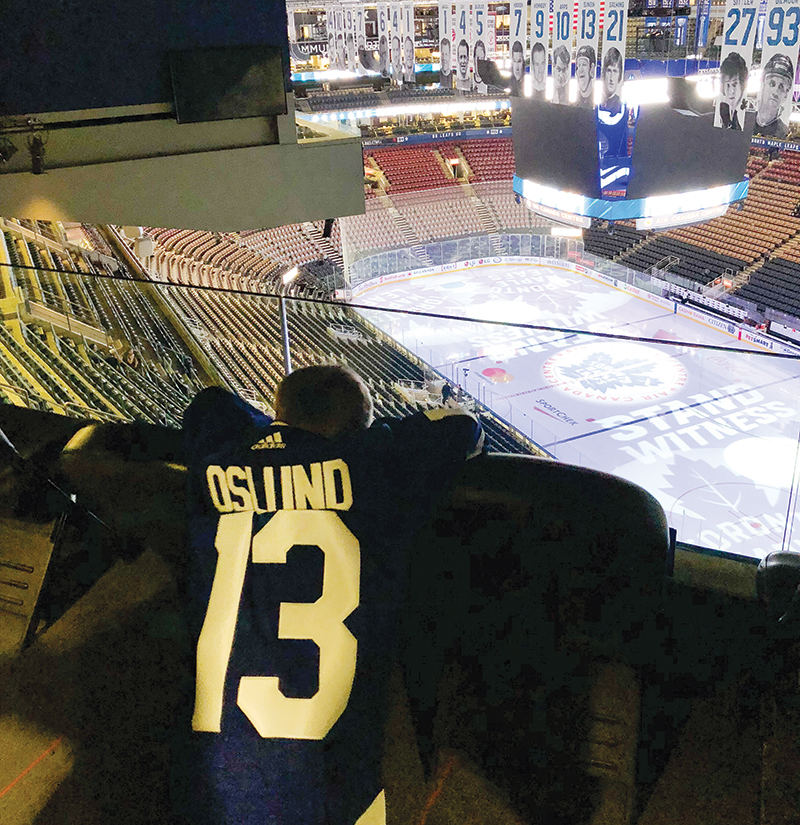 Evan Oslund, sledge participant on a tour of the Air Canada Centre on Saturday, checks out the ice surface prior to a game. The Foundation of the Children’s Treatment Centre of Chatham-Kent received $50,000 from Maple Leaf Sports and Entertainment on the weekend, in support of the centre’s Sledge Hockey and Adapted Skating Program.