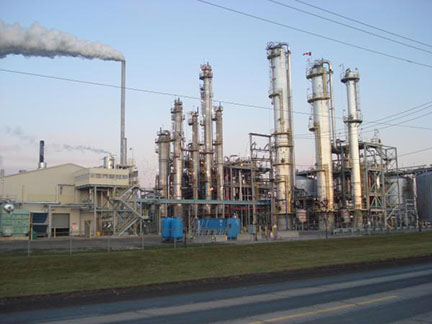 It took nine years of asking, followed by another seven years of planning and construction, but the hard work appears to have paid off for Greenfield Global and Truly Green Farms.

The two companies, with locations across from each other on Bloomfield Road in Chatham, flicked the switch this week to start sharing heat and carbon dioxide.

Greenfield sends 65C water over to Truly Green, along with carbon dioxide via underground piping. In the process, the specialty alcohol producer cuts its carbon footprint and sends less steam into the sky over Chatham.

Meanwhile, Truly Green cuts its heating costs in half, thereby lowering its carbon footprint as well, and has plenty of carbon dioxide to “feed” its 45 acres of tomatoes growing in the greenhouses.

Such a win-win project came with a $10-million price tag. The two businesses realize the payoffs will be tangible, however, with the cost savings in the long-term.

Today, it’s hard to believe nobody jumped at the opportunity to establish a greenhouse near Greenfield when management there first floated the idea of sending excess heat and CO2 to a greenhouse back in 2001. Today, with energy prices being what they are, and governments keeping close tabs on greenhouse gas emissions, this seems like an opportunity for which businesses would have clambered over one another.

Municipal officials say they are very impressed how well Truly Green and Greenfield have worked together on the project since 2010, finding ways around every problem that cropped up along the way.

We should all be proud of the project. It’s a made-in-C-K success story, admittedly with the assistance of Dutch technology.

What this partnership also means to the residents in and around Chatham is less of a steam plume coming out of the stack, and less odour emanating from it as well.

Currently 30 tons of water vapour pours out of Greenfield’s tall stack each hour, given off during the drying process of the corn. With it comes small amounts of vegetable oils, and combined with the drying process, we periodically get that burnt popcorn smell.

So this is a win for both businesses and the community.