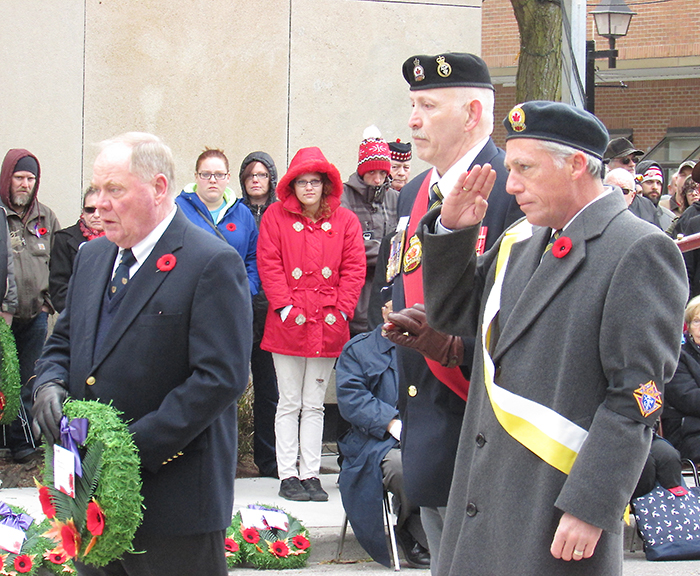 It’s heartening to see the crowd at the Remembrance Day crowds at the cenotaph in downtown Chatham growing seemingly every year.

After all, when you think about the conditions so many of our fighting men and women endured over the years, a little cold weather won’t hurt many of us.

I appreciate the past availability of an indoor service for people who don’t fare well in the cold weather. The indoor event provided seating for those unable to stand for long periods of time.

But for me, standing outside in the chill adds to the somber reality of Remembrance Day. Think of what conditions our vets in the First World War endured; the horror of the mud at Passchendaele, the machine gun fire at Vimy Ridge. Or the sheer terror of landing on the beaches of Normandy under fire in the Second World War. The chill of a Korean winter bore into the soul of many a Canadian soldier. And then there’s the heat of summer and cold of winter in Afghanistan.

To stand outdoors, for those able, is a small price to pay to say thanks to our veterans.

I blame Mother Nature, not my procrastination.

The issue? Our backyard pond. The problem? Fall leaves.

Normally, I have the pond closed up by late September before the leaves have a chance to fall from our trees in the backyard.

This time around, our incredible fall saw me keep the pond open into November.

And then we almost paid for it.

I had a couple of weekends where my joints were really acting up – good weather weekends in late October – when we should have shut down the pump and placed netting over the pond to keep the leaves out. Sure, the oak tree in the back part of the yard had been dropping its leaves for some time, but the two maples that give the pond shade, were still in fine form.

Then the weather decided to return to seasonable conditions. The first frost or two of the year are normally beautiful sites for me. They signal the trees in the neighbourhood to dump their leaves in large numbers. I love the crisp morning that follows the early frosts – generally the winds are calm and the sun is shining. I like to look out and watch the leaves as they flutter and fall here and there.

Only this year, I didn’t like watching them fall into the open water of the pond. The fish don’t like it much either. Decaying leaves in the bottom of the pond can mess with the ecosystem.

So here was the Corcoran clan last Thursday scooping leaves out of the pond, pulling out the pond pump and filters, and cutting back pond vegetation, placing wood supports over the pond, and finally adding the netting. It was a race against the approaching inclement weather – you know the blast of winter that never really arrived?

Not that I’m complaining, mind you. We got the job done in short order, as the rain started to fall. The fish were happy. I was happy.

As I look down at my hands as I type this, I can only think of Finn, our cat. I’ve got a couple of scratches on each hand, most likely from his teeth as I pulled away during episodes of play fighting.

He likes to play rather violently. Reach down to press the button on the recliner, and chance are he’ll be there, paws and teeth wrapped around your hand, waiting to see your response. If you don’t move, he usually lets go immediately and runs off. If you push back, the play fight is on.

Still, he is getting gentler for the most part, and his moments of cat insanity seem to lessen in duration as the weeks go by.

Sure, he’ll have his whacky moments. He particularly likes getting into trouble areas in the basement when I’m down there. He’s a curious little beggar and wants to see everything you are doing, including flushing the toilet. It seems the circling water is fascinating to him.

His idea of helping with the laundry is to randomly pull down items I’ve washed and placed on an indoor drying rack.

Finn also likes to help when we change his cat litter. His assistance is as immediate tester. As soon as you are in the middle of the job, he’ll hop right in and do his business. Not sure if he’s marking his territory in some way, thanking you by adding to your current task rather than waiting for the fresh litter, or what. But he’s consistent.

What is on the rise is his show of affection. And he’s particularly showy with my wife, Mary Beth. He can be in freak-out mode and she’ll pick him up and force a cuddle onto Finn. The next thing you know, he’s putty in her hands and much calmer.

Finn also likes hanging out with our daughter as she does her homework. Sometimes, it’s just lying beside her; other times it’s to try to crawl up under her laptop or to walk across the keyboard.

He’ll cuddle up to me, but usually only late at night, when the ladies have gone to bed and there are no options.

The little guy is no longer so little either. He recently stretched horizontally across my significant belly, and his legs reached over the arms of the recliner.

Neglect to feed that beast, and that’s when you’ll see the spazzy version of Finn show up, and not for fleeting instances.

I compare that version of Finn to the devil in the movie “The Storm of the Century.” In that film, a demon cloaked as a stranger comes to a small town and tells the townsfolk to “give me what I want and I’ll go away.” He wants a small child.

In Finn’s case, he may be a trickster, but he’s no demon, despite what I say when he’s at his absolute worst. And when we give him what he wants – food – he doesn’t go away. But a full belly usually leaves him content and relaxed for hours to come.