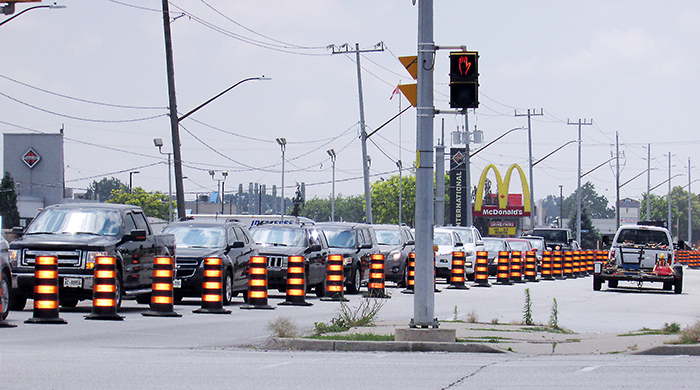 Construction was to begin this week on Richmond Street between Keil Drive and Bloomfield Road.

Chris Thibert, manager of infrastructure services said the $4.8-million project takes place between now and November. It will see the old roadway ripped up and new asphalt put down.

But it will also see a host of improvements, Thibert said. Included in those is a left-hand-turn lane running the length of Richmond Street between Keil and Bloomfield.

“It has been a major strain in transportation and traffic flow, more so heading west,” he said of people turning left on the four-lane roadway. With several large employers, restaurants, industrial malls and side streets along that stretch of Richmond, traffic can back up in the left-hand lanes at times.

The road will be further widened to accommodate bicycle lanes in both directions as well, he said.

Other improvements include the addition of curbing and gutters, driveway and boulevard restoration, and traffic signal and intersection improvements.

Thibert said the planning for the improvements has taken place for some time, but held back until it was time to replace the surface of that part of Richmond Street.

“We wanted to lump everything together and not do it piece by piece,” he said.

Work along Richmond will take place in phases. Thibert said the first phase would run from the Keil Drive intersection to the YA Canada area. The north side of the road, followed by the south, will be upgraded.

“We really want to make sure that intersection gets opened up as quickly as possible,” Thibert said. “It’s definitely one of our busiest intersections.”

During the initial phase there will be no impacts to C-K Transit services.

Once the first part is complete, the second phase will run all the way to Bloomfield Road.

Traffic will be down to one lane in either direction in the construction zones. Access to businesses during construction will remain as well.