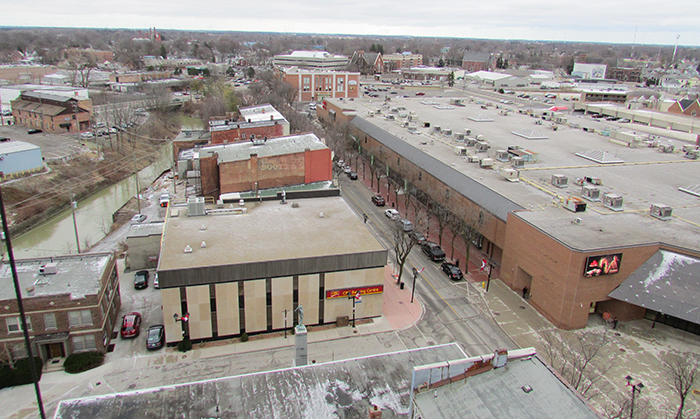 For the most part, I ache every day, to varying degrees. Hey, I’m overweight, in my 50s, and have arthritis in my joints, and sport one metal hip.

My body is not a huge fan of stairs. Ask many people who have had knee or hip replacements and they’ll agree that stairs can be a pain.

But that didn’t stop me from taking a tour of the Boardwalk on the Thames project on King Street last week.

Thanks to Paul Shettel of the Historic Downtown Chatham BIA for getting me a slot on the tour.

And thanks to the guys at Tony Matteis the Cement Specialist for hooking me up with a hardhat and steel-toed boots – items not generally needed by journalists.

Dave Matteis loaned me the boots, which fit fine, and his brother Paul scored me the hardhat.

I was admittedly somewhat surprised to receive the thumbs up to take part in the tour, which was conducted by project manager Brian Chute. I’ve known Brian for a number of years, but Victor Boutin, who runs Everlast Group, the company putting up the building, hasn’t returned phone calls from The Chatham Voice for literally years.

Yet I was granted access. Along with Shettel, the BIA’s Connie Beneteau and councillors Brock McGregor and Darrin Canniff, in I went. After all, I wanted to see firsthand the progress made inside, and to also get a look at Chatham from higher up. Ever since those guys broke into the job side in early 2016 and took photos from atop the crane, I wanted to see the view from above.

Only one problem. The elevators aren’t installed yet. Yep, the overweight journalist with a fake hip got introduced to 10 flights of stairs.

Thankfully, Brian paused repeatedly on the way up to discuss various elements of the project, and to showcase the view from these levels.

On the way down, we went straight from 10 to zero. I survived just fine, other than some muscle fatigue the next day and joint pain that night.

The tour was very revealing – in terms of how much work has actually been done, and how much is still to go. For the average citizen, their impression of the project is typically from what they can see as they drive or walk by. It’s a dominating sight in Chatham’s downtown, but looks a long way away from being finished.

The tour did nothing to change my mind that a lot of work still needs to be done, however, crews have accomplished a great deal as well. But so much of it can’t be seen from outside.

Sure, we all got excited when the brick facades went up. Who wouldn’t? That was visible progress.

We’ll get excited as the windows are installed in the coming weeks too. We toured the third floor and they were all in place there.

What’s also in place is the framing for all the interior walls. The balconies have all been installed, despite complications.

The elevator controller units are on site. Heating and cooling guys are lined up to do the ductwork. The coming weeks, if the site has enough workers, should yield more visible improvements.

And when the weather turns warmer, Brian said we can expect more improvements to the building’s exterior.

I’d love to return to the site in the summer for updated photos, inside and out. I certainly won’t complain if the elevators are up and running then either.