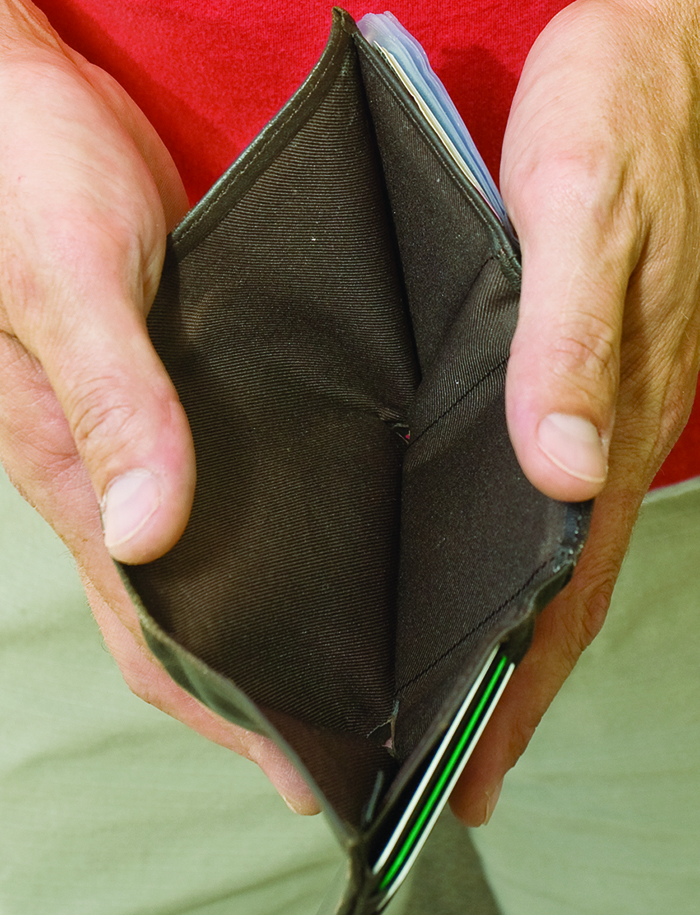 Editor’s Note: In co-operation with the Prosperity Roundtable, The Chatham Voice is profiling three members of the community who live below the poverty line. We have used pseudonyms to protect their privacy.

A north side Chatham grocery store has hamburger at a good price. Whether it’s a good price after a factoring in the price of a cab or bus or a four-kilometre walk is another matter.

That’s the kind of decision Patricia, a grandmother on a disability pension, has to make all of the time.

“I know people think that people on Ontario Works or disability don’t do much, but when you’re in this situation, there is tension on a daily basis.”

September has been a good month for Patricia: with less than a week to go she has about $50 left in her $1,300 per month cheque.

Still, making her way across town to watch her granddaughter play elementary school sports is questionable.

“Even when I have a couple of dollars left, which is rare, you never know what’s going to come up. When the money’s gone, it’s gone.”

A bus driver for several years, Patricia gave up her job to care for her granddaughter eight years ago because there was no one else capable.

“I don’t regret it because she’s family but it has been tough,” she said.

Patricia believes the diagnosed conditions of depression and anxiety have been made worse by her situation.

“I want to get over this so I can get back to work,” she said. “Ninety percent of the people I know on OW (Ontario Works) or disability want to be working.”

She said the isolation caused by not having a car or being able to afford to get around makes the situation worse.

“You withdraw into yourself because you can’t go anywhere. The circle becomes pretty small.”

She hates what she sees as a stigma of living in assisted housing.

“They call my granddaughter and her friends ‘co-op kids’ and the children from the rich houses aren’t allowed to play with her. I hate that. It’s like they wished we didn’t exist.”

Suzie, a mother of three and a grandmother, has seen both sides of the poverty line.

“I was raised by a single mom who did her best to take care of us. She was able to work and we were on social assistance but we never went without anything. I’m sure she sacrificed a lot but growing up I didn’t think much of it.”
Although Suzie didn’t finish her education, she said she never had problems finding employment.

A divorce changed her life and she went on Ontario Works “to be back on my feet.”

“I got my college education and completed courses for a law clerk and office administrator in my 30’s with children,” she said. “It was a busy time.”

When her youngest child was diagnosed with ADHD (Attention Deficit Hyperactivity Disorder) she made the choice to leave work and provide care for him at home.

“I was back on Ontario Works and I’m so grateful for counseling and programs like Operation Backpack and Operation Cover Up because they gave my children help when I couldn’t. I learned not to be judgmental because we can’t always control our circumstances.”

She said her return to the workplace has been liberating and uplifting.

“I’m employed full time in a job with benefits. I love to go to my job in the morning and know I’m making a difference. I don’t sit at home by myself, bored and watching the same TV shows.”

Although money is tight, she’s found a close-knit group of friends, family, neighbours and members of her church.

She said she doesn’t even want to think about where she would be without the help of social agencies.

“It’s not easy but I’m proud to help anyone I can and I’m grateful for those who help me,” she said. “By the end of the month things can be tight. There is always that pressure and when you don’t have money you have to think about things others don’t.”

She said getting groceries means taking a bus or a cab.

“If I take the bus I can’t take very much and if I miss the bus it can be a wait. If I take the cab, I can get more done but it costs more.”

She said people who make minimum wage and don’t get benefits have an extremely difficult choice to make between employment and assistance.

“When you’re getting Ontario Works, you can get medication paid for, you can go to the dentist and not worry if you need a filling. You and your kids can end up financially worse off when you work and that isn’t right.”

She said having to choose between medication and food or paying for electricity happens “far more often than people know.”

“Even that second pair of shoes kids need at school can be a burden if you have no extra money at all.”

She said introduction of a living wage in Canada would help many people and make better employees.

“If someone doesn’t have to worry about eating that day, they can be a better worker and a healthier person.”

She said although “I’m so happy where my life is now”, there are plenty of other people who haven’t been able to make it out of extreme poverty.
“If my bills are paid and I have a roof over my head and something to eat, I’m ok,” she said. “Sure it would be nice to go to the movies or buy a $50 sweater but when it comes down to it, what matters the most is being thankful and I am.”

For Rachel, a choice she made 30 years ago came back to haunt her decades later.

When she was young, she was found guilty of possession of marijuana.

“I was stupid and young. I got caught once and never did it again but I’m paying for it like it was yesterday.”

She said the conviction meant little during her career until she was laid off.

“The place I worked put in a regulation that they only wanted people with a clear record,” she said. “Since I was already on staff and it was so long ago I wasn’t affected but once I was laid off it became impossible to find a job because of it.”

Rachel said she isn’t even allowed to volunteer for organizations wanting a background check.

“It makes you feel less than worthless for something that happened so long ago.”

She said her Ontario Works counselor has been helping her through the process to get a pardon.

“I wouldn’t even know where to begin and I wouldn’t have had the money for it,” she said. “I’m nearly through the process and it’s like I’m getting my life back.”

She said living on the $656 given to individuals each month is nearly impossible.

“I’ve thought about getting a room mate but I like my independence,” she said. “The Ontario Works people are really good but there’s only so much they can do. A living wage or guaranteed income would be so much better.”

“By the end of the month I’m pretty desperate,” she said. “You can find one meal per day on most days if you know where to go.”

She said even if she found a minimum wage job, she wouldn’t be able to pay for her medications which she said are quite expensive.

“If I had to go back to work on a minimum wage job with no benefits, I couldn’t afford medication. It would be like a death sentence.”

She said she’s looking forward to having her record cleared up and to begin to look for work.

“I’d love to be able to afford a car again someday,” she said. “Just to be able to go to for a drive would be amazing. I used to love to do that.”