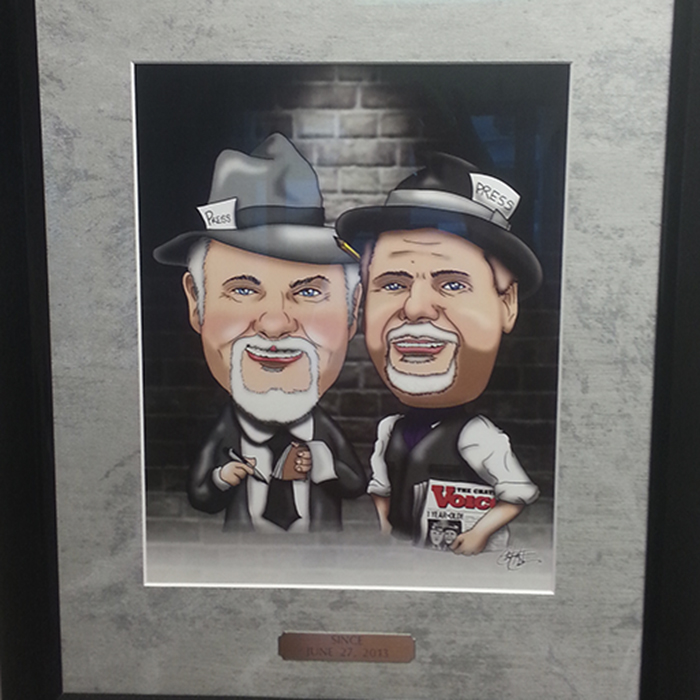 In a few days’ time, Jim Blake will walk out of our office.

On Oct. 17, he starts work with the municipality as its communications officer.

When the rest of us at The Voice come to work next Monday, there will be a void here; Jim won’t be at his desk.

But he’s still part of The Voice family; and he always will be part of our family.

The ONLY thing that will be different around here is the fact you won’t see stories with Jim’s byline on them, or with his personal writing style as he takes an indefinite leave of absence. We’ll still cover the news the same way this paper has for the past three-plus years: with an intense focus on local people doing extraordinary things, local events and local news of key interest to our readers.

And that will most certainly include stories, feature articles and editorials pertaining to the people and operations of the municipality of Chatham-Kent.

Jim has done an excellent job taking the lead in terms of reporting and penning editorials relating to the activities of the municipality.

We won’t suddenly change our tact just because he is not an everyday feature here, or because he’s working over there.

I, and Fatima, Michelle, Mary Beth, Darlene and Nadine, will miss his everyday presence. But we are all still close to him as friends.

In terms of editorial writing, we will be replacing one Ontario Newspaper Award repeat nominee for another, just as we did many years ago at another newspaper.

Back in 2001, Jim hired me to be the municipal affairs reporter at the Chatham Daily News. He was managing editor at the time. A year later, he shifted to publisher and I accepted the role of assistant managing editor shortly thereafter. It was a position I’d held previously at the Lindsay Daily Post.

He gave up his editorial writing duties; I took them over. Seamless.

Through it all, we developed a friendship. Heck, after my initial interview with Jim, I really took a liking to the guy – even when he actually hired someone else to fill the position (the dude took another job and never showed up to work here, opening the door for me), I held no grudge.

That friendship solidified over the years. He cried with me at the passing of my father-in-law, George Marlatt; I shed tears aplenty at the death of his wonderful wife, Heather.

Yes, Jim is vacating his chair in our office. But he is still like family.

This newspaper’s foundation is something he and I built. Together, we hand picked our staff. Because of that strong support crew, we have in place the tools to continue.

We will miss his everyday presence, and the work he contributed as a direct member of the team.

What I won’t miss is sharing a beverage after a busy week, Jim stopping by for a sampling on something grilled on the Big Green Egg, yelling at the TV on a Sunday afternoon while watching football together, or enjoying a bonfire in his backyard.

Why won’t I miss them? Because we will continue to hang out together. That’s what friends do.

As for his taste in sports teams, well, they still suck. And I’ll continue to remind him of that fact. Because that’s what friends do.

The people I work with in our office are incredibly special. Each time someone has a birthday, at least two of them sneak in after work, or before the person arrives for work on their birthday, and decorate their work area.

I arrived Friday to balloons hanging from the ceiling, sparkles galore sprinkled on my desk, party hats adorning my computer speakers, and a few other treats.

So, Fatima had to climb up on my desk to hang the balloons (Michelle, the Sparkle Queen, is too short), and Michelle took great joy in altering my desktop image. It went from being a shot of Wrigley Field, home of my adored Chicago Cubs, to a photo of a rather wonderful Oakland Raiders fan.

Try doing that in a corporate environment.

To say I chuckled when I arrived at the office would be an understatement.

As I type this, the day is far from over, and Mary and Darlene seemed to each walk by with suspicious packages under their arms.

I’ve said we are a family here, but that’s not quite true. Families can squabble and fight a fair bit. We are more of a close-knit group of friends here, and it is part of what makes working here so awesome.