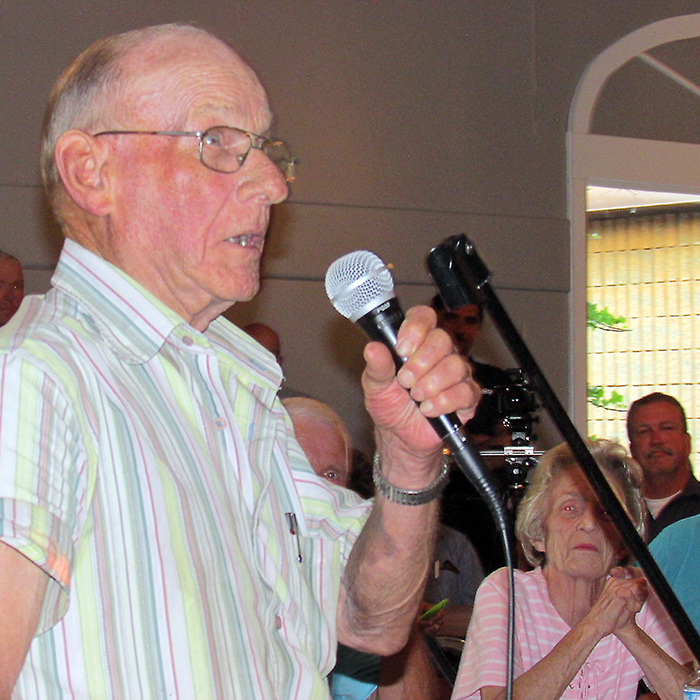 A standing-room only crowd at its first public meeting has convinced the grassroots local group Water Wells First it’s on the right path in its effort to ensure a proposed wind turbine project in North Kent doesn’t damage area wells.

The crowd, estimated by organizers at nearly 300 people, spilled into adjacent hallways and a patio at Country View Golf Course to hear stories of residents affected in the former Dover Twp. and action needed to prevent the same issues in the former Chatham Twp.

“People are concerned and they have every right to be,” said organizer and Water Wells First spokesman Kevin Jakubec. “People had no idea what they were getting into in Dover but it’s no secret that wells are filling up with sediment in areas near turbines. We need to stop this project from proceeding until we understand how it can be accomplished without harming the aquifer.”

Jakubec has filed an appeal with the Environmental Review Tribunal in an attempt to have the North Kent wind project permit re-opened.

That appeal has temporarily stopped the project, which is slated to include up to 90 turbines.

“We have a strong scientific case but it’s going to cost us $200,000 to bring in the experts and convince the tribunal,” he said.

Michele Howes and Ron Tetrault, who have a turbine near their home in Dover, said she’s spent $8,000 on a filtration system that isn’t able to keep up with the sediment and smell.

“I’ve replaced a washer full of sand and a dryer full of sand,” she said. “Our animals would rather go to the ditch than drink our water.”

The couple drinks bottled water, do their laundry in Chatham and go elsewhere to bathe.

She said the well has had problems since installation of the turbine three years ago.

“We can’t be doing this day-after-day,” she said.

Dover resident Gord Dunlop said there are “big problems” in the community. Although he has turbines on his property “I’d say no if I had to do it again.”

Initially, Jakubec said most people believed the sediment problem was related to the “piling” method in which turbine foundations were driven into the ground but now there is evidence operation of the turbines is also a problem.

Earlier this year the Ministry of the Environment and Climate Change recognized that vibration can cause water problems but only required turbine companies to supply bottled water to affected residents.

Area resident Lee Montgomery noted that no mayor or council members attended the meeting.
“Have some guts, stand up and be counted,” he said.

MPP Rick Nicholls said council helped “create this monster” by being willing hosts to the turbines of which more than 450 dot the Chatham-Kent landscape.

Prior to the meeting, Nicholls said countries go to war over water because without it, they have nothing.

“I will stand up for the community and go to war against the government and these industrial turbine companies.”

“To have these industrial wind turbines come along and do what they’re doing is absolutely insane,” he told the crowd. “They put profit ahead of life; well I put life ahead of profit.”

Jakubec said the group believes vibration suppression technology used in other turbine developments should be used in North Kent.

“It’s a sensitive area,” he said. “There needs to be recognition of this and measures put in place now, before more harm is done. We’re not anti-wind, but we don’t want turbines at the expense of the aquifer.”

Jakubec said the aquifer that provides ground water to area residents is 12,000 years old and should be protected.