No one knew what to expect when 85-year-old Beth Young climbed up on Mia, a 19-year-old mare at TJ Stables.

They didn’t have long to wait.

With a “let’s go” and a small nudge from Beth’s legs, the pair were off at a gallop and as they rounded the bend and headed back to the surprised onlookers, Beth let out a yell and waved her cowboy hat in the air.

“Take it easy,” someone said.

“I don’t know how to do easy,” she grinned before heading out for another lap.

For the lifelong horsewoman, getting a chance to ride again was a dream come true, one made possible through the recreation program at Dresden’s Park Street Place Retirement Residence where she lives. 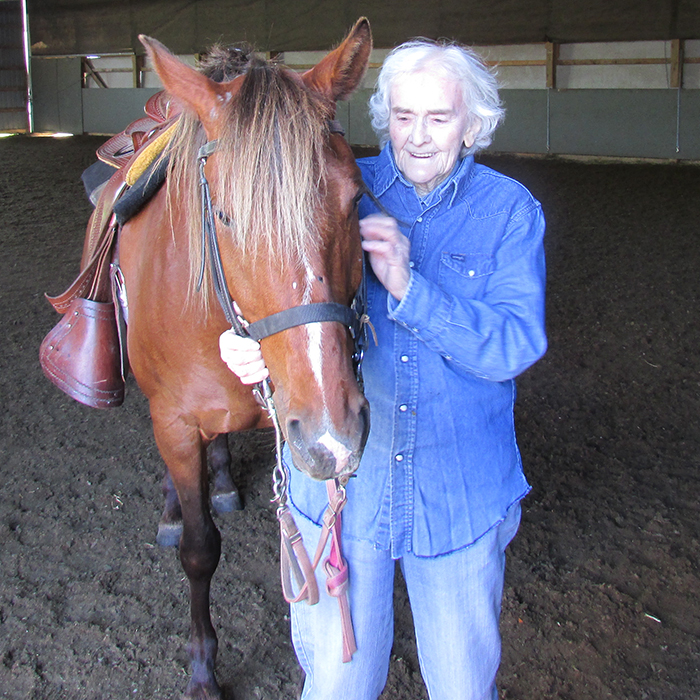 TJ Stables owner Terry Jenkins said, “That will be me in 30 years. She is absolutely amazing.”

For Beth, riding has been a way of life since she was a little girl growing up in Parry Sound.
“I used to skip school when I was little to sneak off and ride somewhere,” she said. “I was terrible. I used to get a spanking when my dad got home and I got the strap from the teachers. I’d rather go riding than go to school. Mother finally said to dad ‘you have to get that girl a horse’.”

She spent her free time at a neighbor’s who had a stable.

“He had six horses. I kept going over there and he’d say ‘go away little girl you don’t belong here’. He finally let me start cleaning the stalls and when he had someone who wanted a solo ride he would let me go out sometimes. I showed the people how to ride so they weren’t bouncing all over.”

When she finally got her own horse, the family couldn’t afford a saddle until sometime later.

She eventually got a saddle and spent hours painting parts of it silver.

“I wanted to look like (cowboy movie star) Gene Autry.” 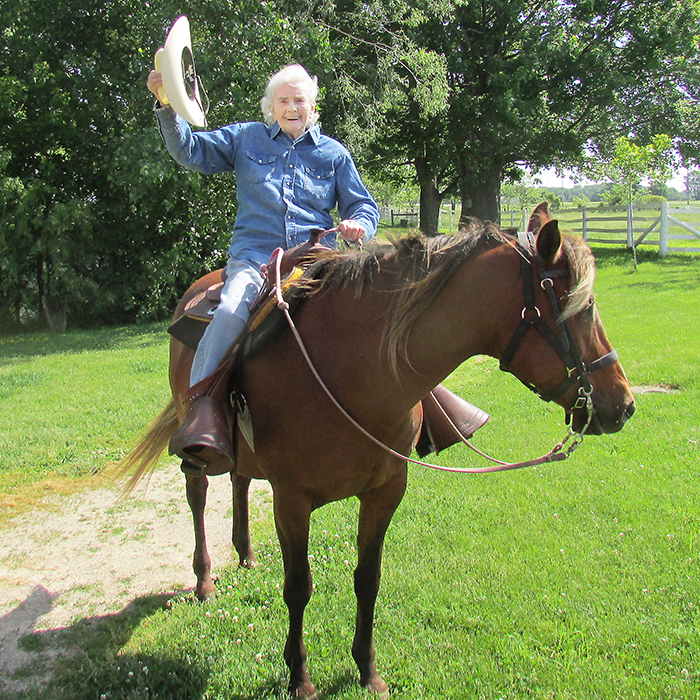 One of her favorites’ as a youngster was a horse named Firecracker that she raised from a baby.

“He was hard to break,” she said. “He was a little devil. “If someone asked me for a ride on him, I had a little trick. I’d tickle him under the belly and he’d go up on his hind legs and they’d say ‘I guess not’.”

She was so horse-crazy she’d even make horses out of snow in the winter.

“I’d make these big snow horses and sit up on them and pretend to ride,” she said. “My mother would have to bring blankets out for me to sit on because I’d be out there so long. One time someone called the police because we weren’t allowed to have horses in town. A policeman came to the door and mother said, ‘yes we had a horse and it was in the back yard’. I can still hear his laugh when he went around back and saw it was made of snow.

Beth’s daughter Bonnie Lou Cook said the snow horse tradition continued in Leamington when she and her brother were little.

“We had snow horses and people thought they were real until they took a longer look,” she said. “Both my brother and myself were riding by the time we were five.”

Beth and her husband moved to Arizona more than 35 years ago for health reasons.

“I drove and we took our two horses,” she said. “We looked around, found a place for sale with a nice little barn and a pasture and bought it. When he passed away I stayed there.”

A frequent rider in the Superstition Mountains, Beth said she never worried about becoming lost.

“I didn’t know where I was going but I always knew that the horse knew the way back home. I’d look at my watch, and tell him I guess we better go back home and he’d turn around and head home. I didn’t even have to touch him.”

While in Arizona, she bought and trained horses and was a competitive barrel racer, leading to a run-in with her husband.

“He sold my colt,” she said. “I loved that little horse, he could really go and oh how he could cut the barrels. I was so angry with my husband I didn’t say boo to him for I don’t know how long.”

An accomplished trick rider, Bonnie Lou said her mother could grab a hat off the ground in full gallop, jump from side to side while riding and mount her horses from behind.

Three years ago, the family convinced Beth to sell her property in Arizona and return to Ontario.

“I miss owning horses,” she said. “I’ve had so many I’ve loved over the years. I had one named Twinkletoes who would walk with his legs up high, his head high and his tail up. They all have their own personalities, just like people.”