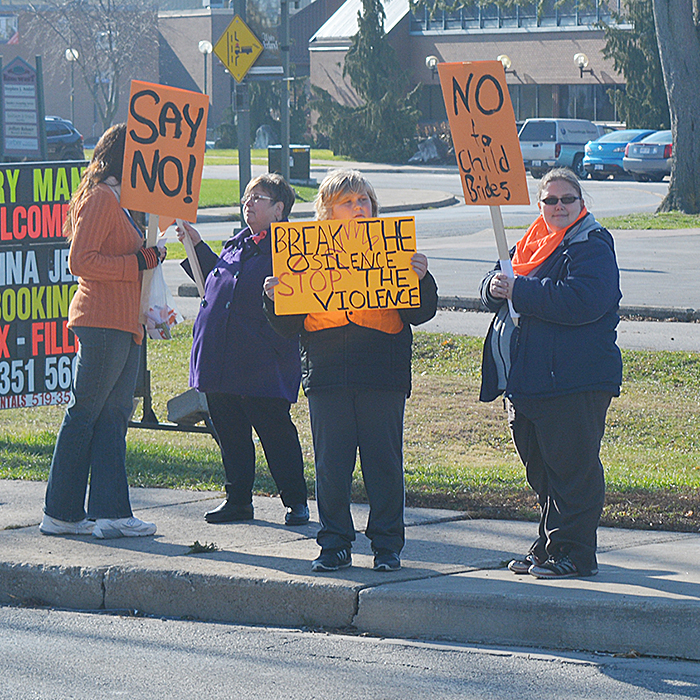 Zack Moore, Special to The Voice

Several people, including women, young men and children, stood along the Third Street bridge to raise awareness for violence against women in Chatham Wednesday afternoon.

“What we are trying to do out here today is to raise awareness to people about the issues of violence against women,” participant Hillary Henley said.

Henley noted that this walk was arranged by the Zonta Club, in which the mandate of the group is to empower women through service and advocacy. This is the third year the club has been on Third Street attempting to raise awareness to the citizens of Chatham-Kent.

Prior to this event, a flag was raised at the Chatham-Kent Civic Centre, arranged by the Chatham-Kent Domestic Violence Committee, with Mayor Randy Hope, MP Dave Van Kesteren, and a representative from Rick Nicholls. Each spoke about the issue of domestic violence.

Henley said they gather on the Third Street bridge to capture the attention of noon-hour traffic and make them aware of some of the issues that should be addressed.

“People are trying to address them but it’s only recently that the issue of violence against women are the things people talk about. For whatever reason, there has always been violence toward women,” Henley said. “Women do not have the same kind of rights as men have.”