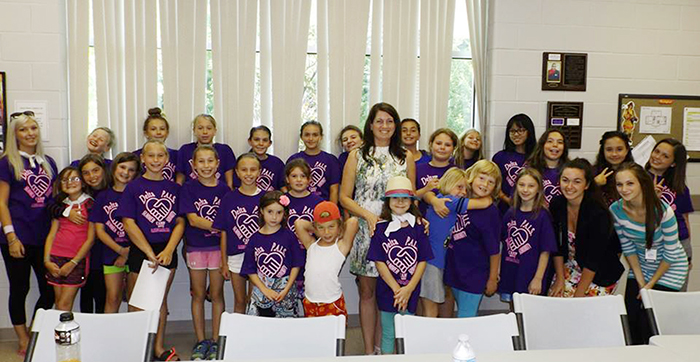 Darlene Smith, president of the Chatham-Kent Women’s Centre, was one of the many guests during the Delta Pals program held July 20-24 at the Chatham-Kent Children’s Safety Village. The program focused on sending messages of positivity and confidence to 25 girls aged six to 12.

Twenty-five Chatham-Kent girls spent last week taking on a wide variety of serious issues but were having so much fun they may not have even realized it.

The girls were part of the Delta Pals program operated at the Chatham-Kent Children’s Safety Village in conjunction with the Delta Zeta sorority chapter at the University of Windsor.

The Pals in the program name stands for Philanthropy, Anti-bullying, Self respect and Leadership. It’s the second year for the partnership between the sorority and Safety Village and the relationship is working tremendously well, according to Safety Village Executive Director Barb Lovell.

“The women of Delta Zeta are amazing to work with and we have such fun throughout the week,” she said.

Devon Paolini, a Delta Zeta member who is enrolled in women’s studies at Windsor said she has been very impressed with the girls attending the camp. “What I’m seeing is that we need to give our girls a lot more than we’re giving them,” she said. “They have so much to say and they need an outlet to allow them to say it.”

Each day of the five-day camp is themed to provide information about being a healthy, confident person who cares not only about herself but the community and world around her, Lovell said.

“In some ways it’s almost a deprogramming because children today are bombarded with popular culture messages which reinforce negative ideas about everything from body image to relationships to roles in society,” she said. “We show the girls that there are alternatives to what they see on television and the internet.”

The lessons learned are interwoven with crafts and games. “For super heroes day, we had women in our community who hold positions of influence. The girls made super hero capes for themselves. When we speak about body image, the girls made positive message stickers which we hope will be placed in change rooms.”

Thanks to funding from the Medavie Health Foundation, girls who participated were given t-shirts that they wear during the camp.

“Wearing the same clothing helps everyone bond and it eliminates any stigma regarding who’s wearing the latest trend and who isn’t,” she said.

By building a positive self-image and awareness the girls become more confident and inspired to help in their community.

“Delta Zeta believes very much in giving what you can to make your community a better place whether that gift be time, money or talent,” Lovell said. “They are such an inspiration to the girls at our camp.”

Although the week at the camp ended, the experience didn’t. “Each of the girls who attended was twinned with a Delta Zeta member so they can keep touch throughout the year via Facebook, email or however works,” Lovell said. “It’s something the girls will carry throughout their lives.”

Lovell said Delta Zeta has enlisted the help of Sigma Chi fraternity at the University of Windsor in forming a week long program for boys. “We did a trial run this year and we’re really excited about what next year will hold.”