We had plans to attend the third annual Shrewsbury Maple Syrup Festival on the weekend, and hit the Home & Garden Show, but a bout of the stomach flu for our daughter nixed that concept.

Instead, it was another weekend close to the home. But at least the weather allowed us to escape from the shell of our home.

And my Monday morning aches also confirmed it – the result of some spring yard work.

We got the pond opened, hot tub drained, cleaned and refilled and some leaves picked up around the house.

As we opened the pond Sunday, I received a pleasant surprise. One of the koi survived. It looked lonely, despite the fact goldfish surrounded it.

I did, however, find a dead shubunkin. They’re about the size of goldfish, but are generally black, white and orange. Nice fish. Not so nice when floating upside down.

And when I opened up the skimmer, I found a graveyard. I think there was one fish in there, and maybe a frog. They had been in there for a long time, likely shortly after we closed the pond for the winter.

As we cleaned that mess out, the smell was pretty atrocious. Mary had to leave the area, and wondered how I could stand it. It smelled like a hot afternoon at a fish market.

It could be worse. It could have smelled like vomit (my wife had to deal with that on Friday with our kid).

But we got the fish goo cleaned out and fired up the pump. Once the weather warms, we’ll look at adding a few more fish, at least one of which will be a koi.

The pond was the Sunday main task. Saturday was the hot tub. The water in the tub had been there since late fall. A long, cold winter meant we used it, but not as often as I had expected.

When we purchased the hot tub used, it came with a siphon device for draining. Very simple and very effective.

It has about four feet of clear plastic pipe with some kind of float device in the middle, and it’s attached to about 10 feet of flexible hose. It’s all about two inches in diameter.

To drain the tub, I just set the hose where I want the water to flow, take the plastic section, submerge the open end in the tub and pump it up and down until the water begins to flow.

I usually just leave the plastic piece lying in the bottom of the hot tub, with the open end in the lowest section of the tub. But I also use it as a vacuum of sorts, sucking up the little bits of stuff that invariably wind up in the bottom of your hot tub.

This thing takes maybe 20 minutes to drain the tub down to less than an inch of water at the very bottom. I hosed off the sides after I gave them a good scrubbing, so the amount of original water left in the tub was minimal.

Refilling takes so much longer. Then again, there’s about 950 litres of water in there.

Naturally with such great weather, I had to barbecue this weekend, but nothing serious, since the kid was ill.

I just did a mix of chicken, hamburgers and pork, with people grabbing what they felt like munching.

With the weather finally warming, I am hoping I will no longer be the only Corcoran sitting in the backyard as the meat cooks. Then again, they don’t exactly like sitting out in the howling wind as snow swirls around them. Well, that is gone for at least a few months, ladies. 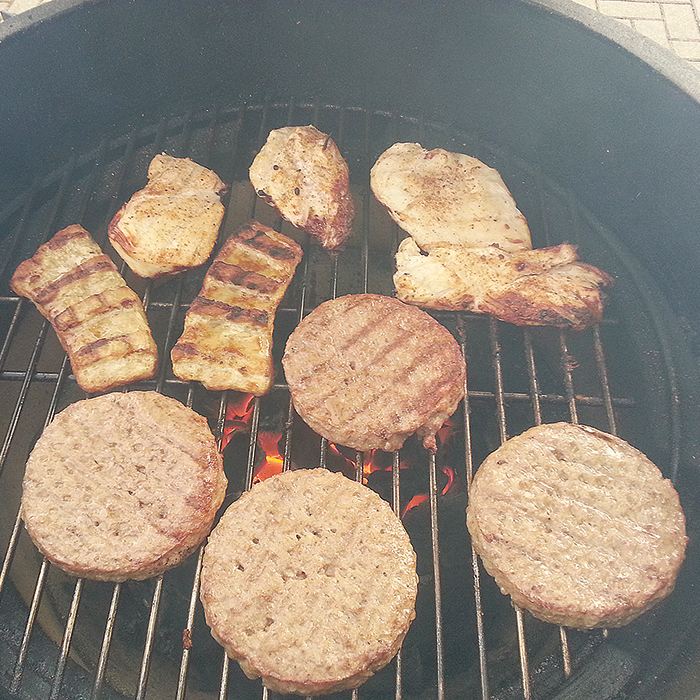