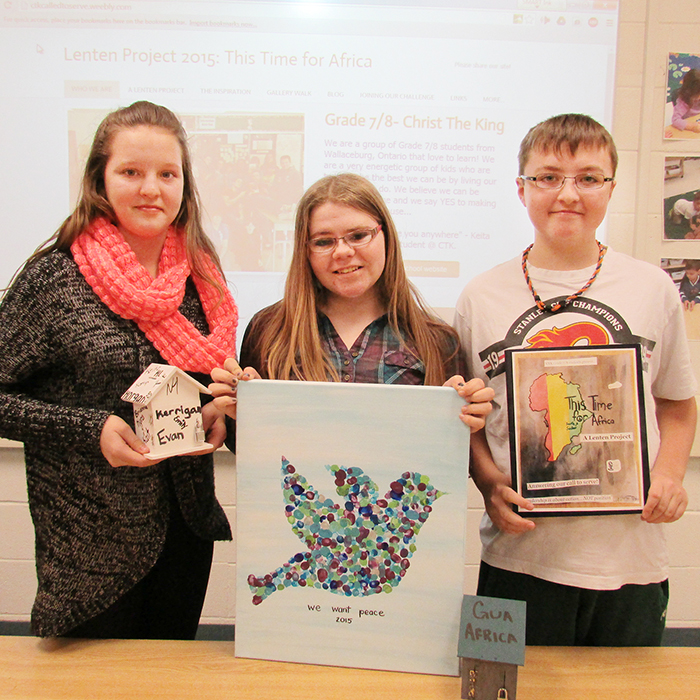 From left, Kamryn Hull, Emily Sparling and Braydon McFadden, three of the students from Courtney Mellow’s Grade 7/8 split class, showcase elements of the class’s Gua Africa fundraiser, which is the group’s Lenten project this year. Included is the auctioning of the painting of a dove, comprised of the fingerprints of children at the school, plus that of several parents.

A meeting with former child soldier Emmanuel Jal has spurred a group of Wallaceburg students into action.

The Grade 7/8 split class at Christ the King School in Wallaceburg is working hard to raise funds to help give kids in Africa access to education, not guns.

Jal, by age 7, was a member of the Sudan People’s Liberation Army, battling the government in the East African nation. Like so many other children in Africa, he was forced into it.

But Jal eventually escaped such brutality. He’s become an activist and hip-hop artist. He recently spoke to students during a visit to Ursuline College Chatham. That’s where the Christ the King students met him. To say they were impacted by him would be an understatement.

According to teacher Courtney Mellow, the students came back to class and wanted to dedicate their Lenten project to help Jal’s Gua Africa campaign. Gua Africa promotes education in Africa, specifically in Kenya and the Sudan, by building schools and providing supplies, as well as aiding refugees who have survived war and genocide.

“They’re trying to bring awareness to it,” Mellow said of her students. “They challenged our entire school board to raise money for it. The whole thing has kind of snowballed.”

The class started a website – ctkcalledtoserve.weebly.com – and built miniature schoolhouses to raise awareness and cash. The schoolhouses have gone to every school in the St. Clair Catholic District School Board, and the website talks about the kids, the project, and why they’re doing it.

It all goes back to meeting Jal.

“When we went to our UCC day at The Pines, he spoke to them. They were just floored,” Mellow said. “They came back and wanted to raise money for the charity he started.”

Student Braydon McFadden said listening to Jal motivated him to get involved in the project.

“I found him really inspirational,” he said.

“Braydon has a huge role in this. He made a presentation to the school board and helped with the web page,” she said.

He’s not alone. The students hope to raise $2,000 for Gua Africa. That’s how much Jal impacted them.

“Just seeing him and knowing he is making a difference for people who don’t have a chance to learn,” is why Emily Sparling is so interested in working on the Christ the King project. “We want to raise money and help build more schools.”

Kamryn Hull said Jal helped her realize how fortunate she is to be growing up in Canada.

“We’re learning what it would be like if we were over there,” she said of the struggles of African children. “In Canada, when people go to a restaurant, they become upset if they find a hair in their food. Over there, people would just be happy to have that food.”

As Mellow said, their efforts snowballed.

“The kids came back and were all excited and wanted to do something. It went from that to challenging the whole school board,” she said. “They want to bring awareness to the whole issue. They can be agents of change.”

The project continues through Lent right up to Easter.

If the students raise $500 or more, Mellow said they’d get the opportunity to talk to Jal via Skype.

In terms of fundraising, they got off to a great start. Mellow said on the night of parent-teacher interviews, the students raised about $100.