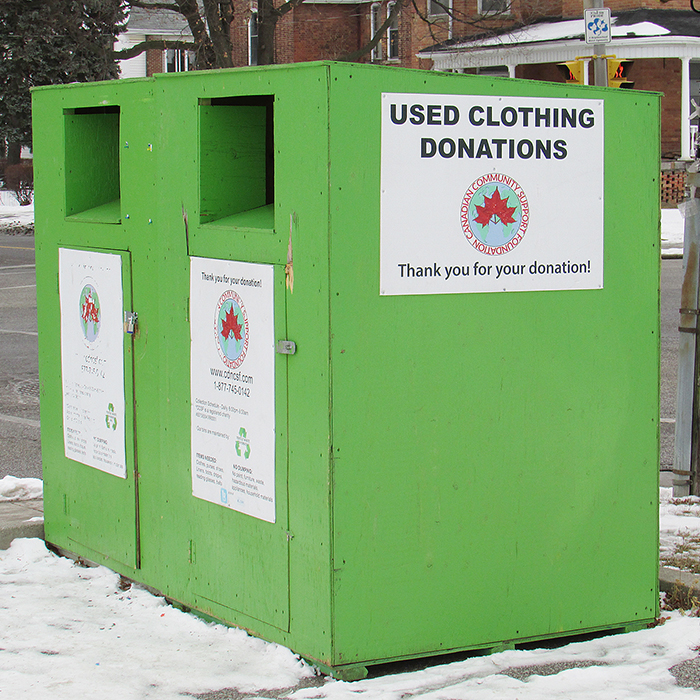 The used clothing market is big business, one a Chatham councillor is hoping remains largely with local charities.

Clothing donation bins bring in more than $100 million a year in Ontario.

Chatham Coun. Michael Bondy asked municipal administration to develop a bylaw that would monitor where donation bins were placed in the municipality. He made that request nearly a year ago.

Administration is bringing its response to the Feb. 9 council meeting. Bondy said it’s his understanding administration will not recommend Chatham-Kent proceed with such a bylaw. That doesn’t sit well with the councillor.

“These bins are showing up all over town and they’re from companies that are making tremendous profits,” he said. “They’re dumping them on private property and not asking permission from the landowner.”

Bondy said he has had two placed on his property on Richmond Street. He called the companies and the bins were “eventually” removed, he said.

Bondy wants to see the municipality enact a bylaw that would force the bin owners to register their bins with the municipality so Chatham-Kent could monitor their location as well as numbers. He thinks such a bylaw would solve the problem without creating more work for bylaw officers.

“I’ve heard from Goodwill and Bibles for Missions. They say if they’re monitored, these things will disappear and we’ll get back to giving to local charities,” he said. “Other communities have passed these bylaws and these for-profit bins disappeared.”

Bondy said the companies don’t want the bother of having to register the bins and simply move onto other municipalities.

“Once they put the bylaw in place in Sarnia, they’ve never been back. Not one bin has arrived. That doesn’t mean they won’t, but it is more of a deterrent,” he said.

Pat Alton, a board member with Bibles for Missions, also wants to see a bylaw passed.

“It’s cutting into our business,” she said of the out-of-town bins. “Truckers are hired to go around and empty them and haul them to Toronto to sell it.”

She and Smith said the losses to local charities are tangible.

“I know how much money we get from salvaging clothing. If they have 75-80 bins out in Chatham-Kent, they’re getting an awful lot of salvage.”

“We create jobs. From an expansion and service point of view, this is very serious,” Smith said. “We are seriously looking at opening operations in Wallaceburg. If this (the out-of-town bins) doesn’t go away, we will not expand into the very place where jobs are required.”

Bondy stressed it is up to council to help C-K’s charities.

“We look after each other in Chatham-Kent,” he said. “This is one of those things. Our charity money and the donations should stay in the community.”