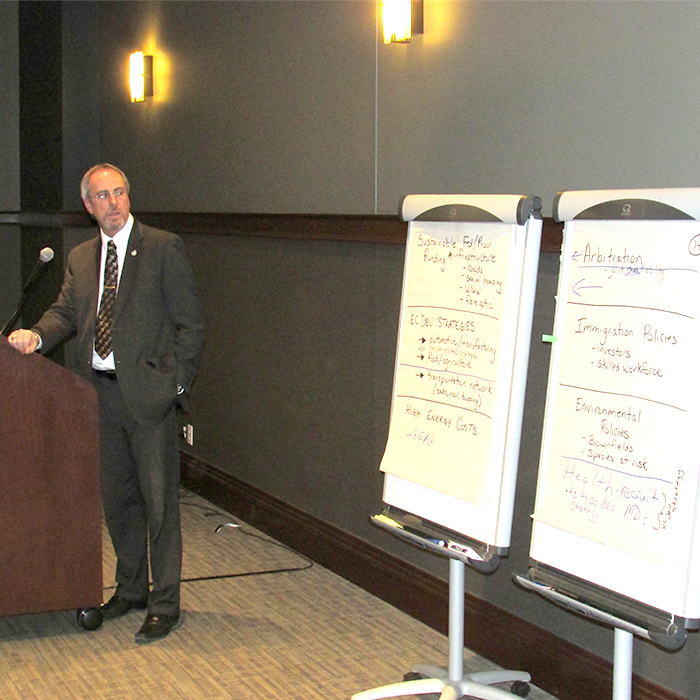 More than 40 government officials, including 24 mayors, spent much of today finding common ground and a unified voice to lobby senior government to strengthen everything from infrastructure to economy during the first meeting of the South Shores Mayors of Ontario.

The newly-minted group came together at the John D. Bradley Convention Centre at the behest of mayor Randy Hope. “In talking with various mayors across this part of the province I kept hearing the same issues over and over again,” he said. “It’s time we got together and raised the issues jointly because there is strength in numbers.”

Attendees from London, Windsor, Sarnia and communities in between spent much of the day talking about infrastructure, the environment, the auto industry, agriculture and the relationship municipalities have with federal and provincial levels of government.

Hope said the name was his way of bringing additional attention to the issues.

“I want people to ask what South Shores means,” he said. “We have a combined population of nearly one million people but we are continually overlooked because government splits us into this small community or that small community. “

Sarnia mayor Mike Bradley said he’s in favour of a unified approach but “results count more than intentions. We have to develop a strategy but the key will be making senior governments listen to us.”

Hope said the session was very useful, noting that those attending “filled a wall” with ideas before boiling them down to a manageable number.

Joanne Vanderheyden, mayor of Strathroy Caradoc, said the key to the effort would be in its unification. “There are issues which are of more importance to some communities and lesser to others but we can’t let that sideline us. Once we develop a strategy we have to see it through as a group.”

He said one of his group’s goals is to make this part of Ontario an “intelligent region” in terms of technology, including connectivity. “We have parts of the region which are still more than a decade behind in Internet connectivity,” he said. “We need growth right across the spectrum including from fibre optics.”

Mayor Hope said although the effort needs to be thorough, it must also be timely.

“We have senior level budgets under preparation and a federal election at some point this year,” he said. “We need to make ourselves heard now.”