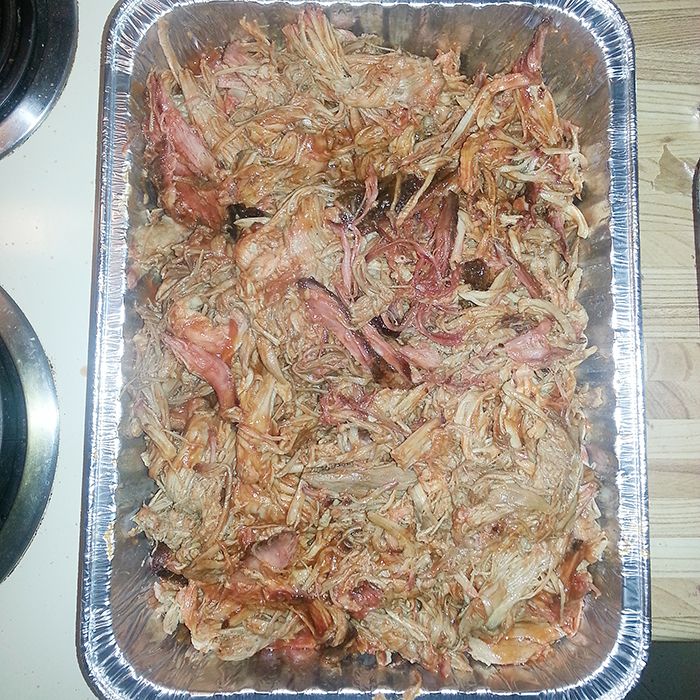 Talk about a weekend of highs and lows.

It started with a great overnight cook of a huge pork shoulder on the barbecue. The Real Canadian Superstore had a huge sale on the monsters for a mere $1.28 a pound or so. Each chunk was a good 16-20 pounds.

Sensei Jeff walked out with 10 of them, sent me a text to inform me of the deal, and I hopped out and grabbed three.

He somehow made room in his freezer for all 10, while I put two in mine and prepped the other Friday night for an overnight cooking.

But first we sizzled up some steaks and grilled peppers. I tried the reverse sear process for the first time on steaks and will do it again. This is where you cook the steaks at your regular temperature and then finish them off at a higher temperature to get a light char coating on the outside of the steak. You don’t burn off the seasoning, but rather seal in the juices for the most part.

The steaks were amazing. 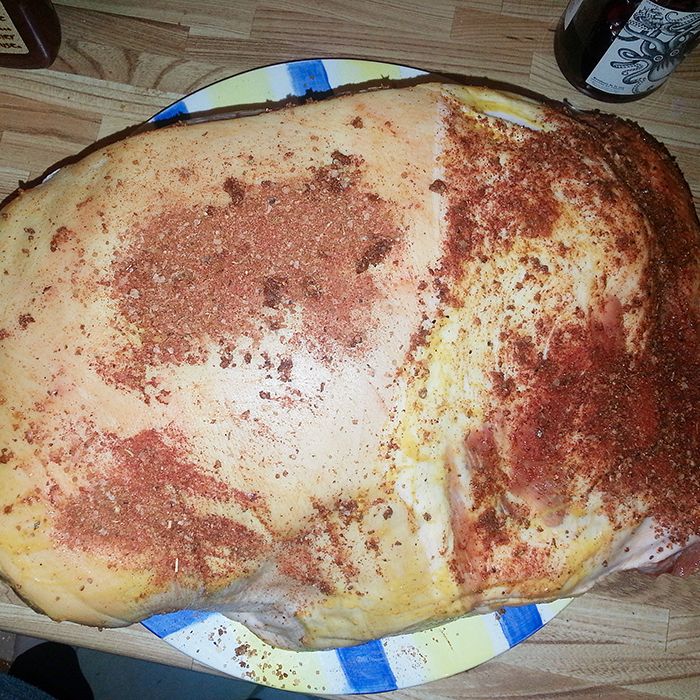 Then it was time to prep for the big event. I lightly rubbed mustard all over the big shoulder and then with my daughter’s assistance, liberally added coarse Dizzy Dust spice. The mustard essentially holds the seasoning in place.

With the meat nicely coated, I set to filling the firebox in my Big Green Egg for a long cook.

Unfortunately, I didn’t fill it quite high enough. Ten hours into the cook, I had to go out at 6:30 a.m., pull off the meat and the grill, plus the indirect plate, and add more charcoal. Fortunately, the rain hadn’t started at that point.

This delayed the cooking process. I had hoped to have that big hunk of meat ready by about 2 p.m. Instead, it came off about two hours later.

After an hour of letting it rest, Mary took to pulling it. The bones came out clean with minimal effort, and the fat cap fell right off, leaving a mass of tender, succulent pork to pull with two forks.

She had already prepared her homemade sauce while the meat was resting, so we were ready for dinner.

Our daughter has been eating it for lunch and dinner ever since. We brought a bunch of it in for lunch for staff on Monday (they have long been complaining I don’t share enough of our barbecue efforts with them).

After such a great Saturday, I awoke Sunday morning ill. The stomach flu had arrived. It had danced around the office for the past several weeks, and decided to stick with me for the day.

At first, I feared the meat was bad, but Mary and Brenna were fine. I spent my Sunday alternating spending time under two blankets in a recliner and reading a book in the washroom, if you catch my drift.

With playoff football on the TV, I was a captive viewer, aside from when I dozed.

I had a front-row seat when the officials essentially decided Detroit’s fate by picking up a pass interference flag on Dallas. It was one of the most brutal officiating foul ups I’ve ever seen in football. This was a huge momentum change at a crucial moment in the fourth quarter. Lions fans, you were ripped off!

Just another reason to despise “America’s Team,” the Dallas Cowboys.