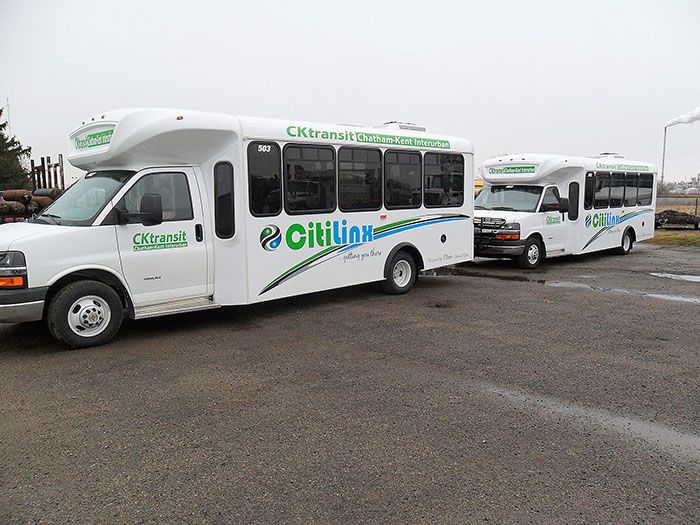 To ring in the new year, Chatham-Kent’s inter-urban transit is changing operators.

Well, yes and no.

CitiLinx won the tender to operate the buses that transport passengers between the municipality’s urban clusters. It takes over from Chatham Radio Cabs.

The transition will be about as seamless as it can get. Marc Weaver, operations manager, said the same buses will roll down the roadways, driven by the same drivers.

In fact, CitiLinx and Radio Cabs have the same ownership.

Weaver said he believes in continuity.

“We kept all our same drivers. That means a lot to people. They know who the drivers are. I keep them on the same route so people can get familiar with them,” he said.

What will change, however, is flexibility. Weaver said that as of mid-January, inter-urban transit users will be able to hop aboard a Chatham bus at no charge.

“You will be able to transfer buses. We’ll be able to get them on a city bus and get them over to a doctor’s appointment, whatever, at no extra charge,” he said.

Weaver said the inter-urban buses are all utilized, for good reason.

“It’s a good service. It was set up that way (morning and afternoon runs) to give the people a way to get to and from work, or for someone to get to one of the hospitals. It gives them a chance to get into Chatham, do some tests and then they can go back home,” he said.

Morning routes begin as early as 6:15 a.m. and afternoon runs go until 9:15 p.m. For routes and times, visit cktransit.com.