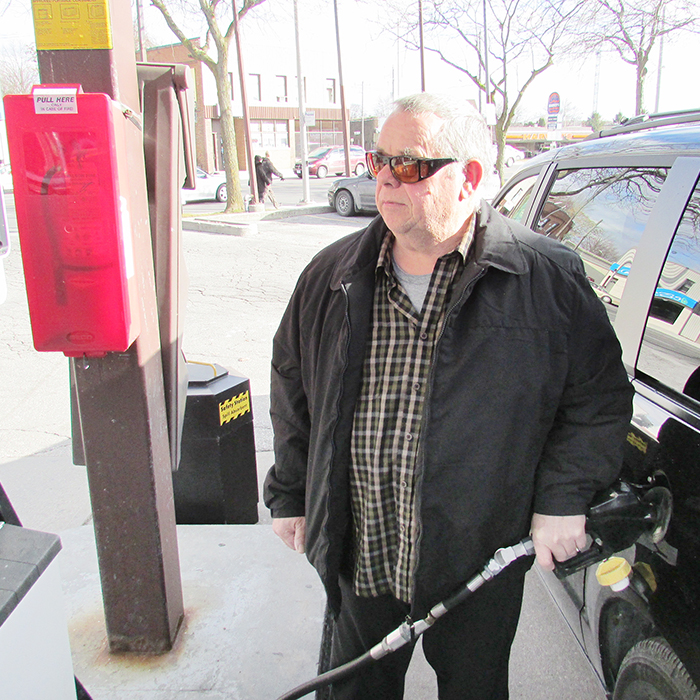 Bruce Hodgson tops up his tank at the 7-Eleven on St. Clair Street in Chatham. He and many, many others are happy to see gas prices drop below $1 a litre. Prices are the lowest they’ve been this decade.

With gas prices reaching a four-year low just before Christmas last week, local folks were smiling at the pumps.

Bruce Hodgson of Wheatley, who was gassing up at the 7-Eleven at the corner of St. Clair Street and Grand Avenue, hopes the lower prices stick around.

“People are saying it will last until spring. We’ll take it while we can get it,” he said.

Hodgson said it’s reached the point where some people are even putting premium in their tanks again.

On Dec. 18, the average price of gas across the country fell below $1 a litre, the lowest it has been since August 2010.

As of Tuesday morning, prices in Chatham were sitting around 91 cents per litre.

Krissy Rioux said she’s seen gas prices fluctuate a great deal over the years, but is happy where they slid to last week.

Ivan Katzman thinks prices should be even lower.

“It’s great to see prices falling like this, but based on the price of oil, the gasoline prices are still high,” he said.

Katzman added the province should look at adding a carbon tax on gas, perhaps as much as six cents a litre. British Columbia instituted a carbon tax on fuel back in 2008. It is revenue neutral, meaning the government had to cut taxes elsewhere to implement it.

Since the tax was implemented, B.C.’s use of fossil fuels has dropped by 16%.

Katzman thinks such a tax could work in Ontario, if it too were revenue neutral.

“With gas prices falling close to 40 cents, it would be a cakewalk to implement, as long as the offset is there,” he said.