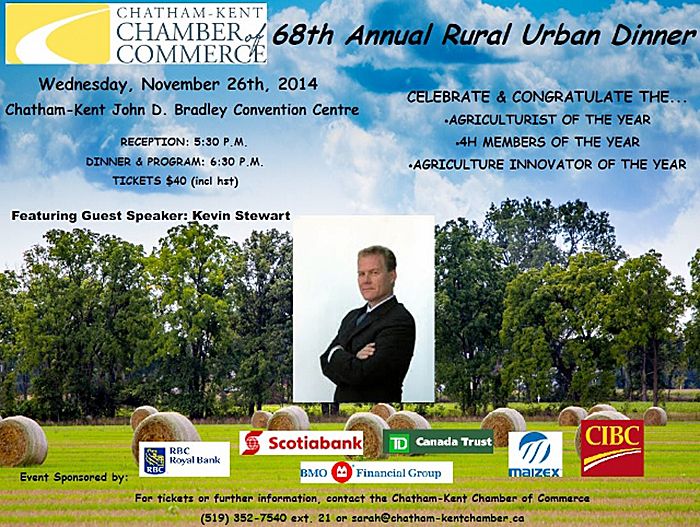 Louis and Clara Roesch don’t know the meaning of the word “quit.” Their dedication to local agriculture, on their farm, in their business and when helping others, earned them agriculturalist of the year honours.

The Roeschs will receive the award at the 68th annual Rural Urban Dinner Nov. 26 at the John D. Bradley Convention Centre.

Also receiving honours this year are Kearney Planters for innovator of the year and Sarah Campbell for 4-H member of the year.

The Roeschs operate Roesch Meats and More on Northwood Line east of Chatham. They raise their own grain-fed pork, have egg-laying hens, and process the pork and eggs on site, Louis said.

Louis said Clara is heavily involved in everything.

“Clara is 100% in this too. She does the deep and dirty stuff when I’m not home, looking after the OFA and Kent Federation of Agriculture stuff,” he said.

Louis is quick to work for other farmers.

“There’s always something on the table that I have to deal with. If I can move it forwards, then I’m happy to do so,” he said. “Our shop is a strange place. People come in with their problems and I help when I can. Some of these things get tough enough.”

Louis said Clara is a problem solver as well, as she makes specific recipes for people who come in with dietary concerns.

“The people that have come to me to ask for help really have been the drivers. They come to me with trust that I can help them. If I can, I do. That’s what keeps me going,” he said.

What keeps Kearney Planters going, on the other hand, is adaptation. Mark Mallot of Kearney said the company, located near Thamesville, first started up 35 years ago almost by accident.

Founder Barry Kearney designed and built a planter for himself, Mallot said.

“A neighbour saw it and asked if he could make one for him. Before he knew it, he was in the planter business,” he said. “When we first started, we custom-built planters to suit everyone’s needs. Now, we largely sell new equipment or good, used equipment.”

The customization side of the business has slowed somewhat, as farming operations are getting bigger and want larger equipment.

“The (customization) market has slowly decreased, but I don’t think it will ever go away,” Mallot said.

Kearney does build a diffuser that helps minimize the wasting of insecticide, Mallot said. It collects the insecticide that normally would disperse upwards and redirects it down to ground level.