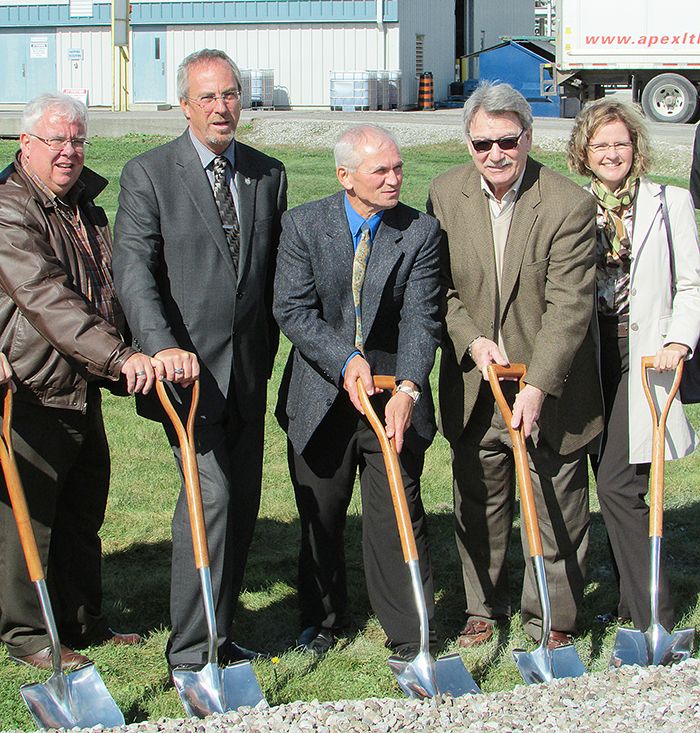 Four billion and 40 million. As Greenfield Specialty Alcohols celebrated producing four billion litres of alcohol from its Chatham plant since 1997, it today announced a series of expansions that will total $40 million.

Barry Wortzman, Greenfield’s vice-president of business development, said Greenfield is proud to be part of the Chatham business community and plans to be here for many more to come.

Plant manager Angelo Ligori said the $40-million project, when completed, will bring Greenfield to about the $300-million mark in terms of capital invested in Chatham-Kent.

He added the expansions will mean another five to eight jobs in house, but there will be spinoff jobs nearby, and beyond.

The closest jobs will come right across Bloomfield Road at Truly Green Farms, a tomato greenhouse operation. The plan is to pump the carbon dioxide and excess heat generated at Greenfield under the road and into the greenhouses.

When the excess Greenfield heat is utilized, Devries estimates it will reduce Truly Green’s heating costs by 50%.

Ligori anticipates the heat-recovery system will be operational in 2016. He said Truly Green has to expand before it can be utilized.

“We have enough heat for about 60 acres,” he said.

Truly Green’s footprint is currently a little over 20 acres.

The heat recovery system is designed to integrate the heat and carbon dioxide output from the plant, Ligori said, and will be “sent to our neighbours, Truly Green, to complete the carbon dioxide cycle into the tomato plants.”

The carbon dioxide is produced during the fermentation process, but will be utilized to help increase growth at Truly Green, thus lowering both operations’ carbon footprints.

“This plant is world class for industrial alcohol,” Ligori said, adding its high-purity alcohol is shipped as far away as Chile.

To help minimize the chance of interruption of production and save money on energy expenses, Greenfield will also install a five-megawatt cogeneration system powered by a 5,000 horsepower jet engine.

“It will be powered by natural gas. The heat will be used to make steam, and it drives a generator to create electricity,” Ligori said of how it cogenerates.

Dan Charron, president of Entegrus Power Lines, said when the generator is operational and Greenfield is essentially pulled off the power grid, it is like removing 3,500 homes from it, lightening the load on the entire system.

The efforts being put forth by Greenfield impress Charron.

“Good management is doing things right. Good leadership is doing the right things,” he said. “Greenfield is doing both.”

As Greenfield looks to lower its carbon footprint and help Truly Green do the same, it is also seeking to help the environment in other ways. Ligori demonstrated by pulling out a bag of weed.

It was literally a bag of weed –not marijuana, but invasive phragmites.

Greenfield’s research and development team, located on Park Avenue in Chatham, has been working on alternative sources of bio-fuels and bio-alcohol for some time.

Ligori said the twin-screw extruder, part of the integrated technology platform also being built, can turn phragmites into alcohol.

Second-generation technology developed at the Park Avenue location will be installed at the Bloomfield site, Wortzman said.

That will include biomass pretreatment for the production of cellulosic ethanol and other bio-based chemicals, as well as a two-stage anaerobic digestor, which will produce bio-methane and bio-hydrogen. Also on site will be a gas-to-liquid system that will produce bio-jet fuel, Wortzman said.

Ligori said most of the project should be operational by next July. The heat recovery system will be the final piece, expected to come online the following year.