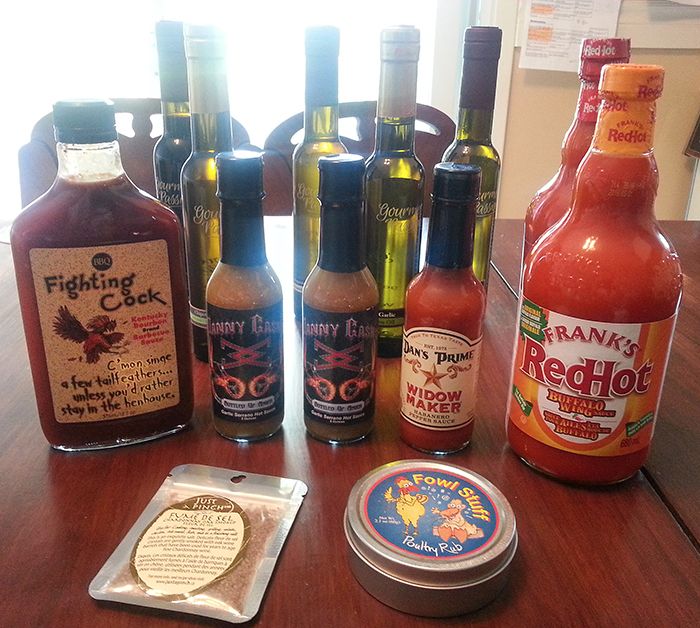 When asking a spouse to purchase “some” hot and barbecue sauces, a person should really be more specific.

Then again, if you are into cooking, why bother?

My wife and daughter drove up to Corunna for a baby shower on the weekend, and slid up to Sarnia to check out the stock of a gourmet cooking shop a friend of ours is helping out with.

We tried a couple the week before and loved them, so my wife brought back more … a lot more.

We have barbecue sauces, hot sauce, and flavour-infused vinegars and oils. We are armed to the teeth to add great taste to any meal.

And on Sunday, we put as much as we could to the test, doing chicken wings in no less than six different sauce and/or spice combinations.

Yes, I am now addicted to barbecuing chicken wings on our Big Green Egg. I’ve cooked so many other items on the Egg that I never bothered with something as simple as wings. That was a mistake!

But as flavourful as they all were, I am now leaning towards keeping it simple – at least on the barbecue. A little bit of oil and/or some spice rub is the way to go when barbecuing wings. You can add the sauce later, or risk charring it on the grill, especially with the sweeter sauces.

As for all our newfound flavourings, I think I have a busy fall ahead of me cooking chicken, steak, pork and vegetables in the great outdoors.

Sweet swim for the wasps

I went hunting for a wasp trap Saturday and learned quickly that pretty much every place in town was sold out of them. Some inventory was supposed to arrive this week, but I wanted help on the weekend.

So after I posted the fact there were no such traps to be found in Chatham, a buddy of mine said he’d pop by and make one for me. 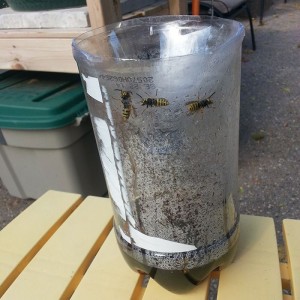 Chad showed up with a half-full two-litre bottle of Pepsi. I thought we were going to be drinking some rum and Pepsi for the afternoon, but he quickly explained his plan to create the trap.

We got a pair of sharp scissors and cut the top off at the point where it is as wide as the rest of the bottle. He then inverted the top and placed it inside the bottle, taping it in place.

We left the bottle about one-quarter full of the sweet, but flat, cola.

Next up, we put it on a table in the sun in the backyard, grabbed a couple of beverages, sat back to shoot the breeze and watch the wasps.

He was right. This thing works great! In no time, we had our first customers. Wasps crawled down, but couldn’t find their way out.

Chad reminded me wasps don’t fly straight up or down.

He said we could even cut holes in it if we wanted to hang it somewhere.

And when we need more wasp-attractor, we can just add more pop, or sugar and water.

By the end of the weekend, I had wasp soup in the container, with more buzzing around seeking their sweet demise.

Barbecuing or just hanging out in the backyard was much more pleasant. Sure, the odd wasp buzzed by, but usually on his way to the trap.

The case of the missing Crocs

A strange thing happened recently in our backyard. I have an old pair of unfashionable Crocs I wear around the yard. They’re great for yard work or going to and from the hot tub (I hate flip-flops)

I left them just outside our back door. Then one morning, one of the shoes was halfway down the path to the hot tub. I put it back beside the house.

The next day, it was gone altogether. I figured the wind had either blown it off the step or some critter had taken it further into the backyard.

Before I found the missing shoe, the other Croc vanished.

I am now wondering if one of my anti-Croc acquaintances, people who prefer fashion to function, staged some form of an intervention, or had some weird commune with the animals to rid our backyard of such ugly footwear.

Odd, but humourous. I can’t help but picture a raccoon running off with one of my Crocs in his mouth, only to realize he’s getting a taste of my feet!