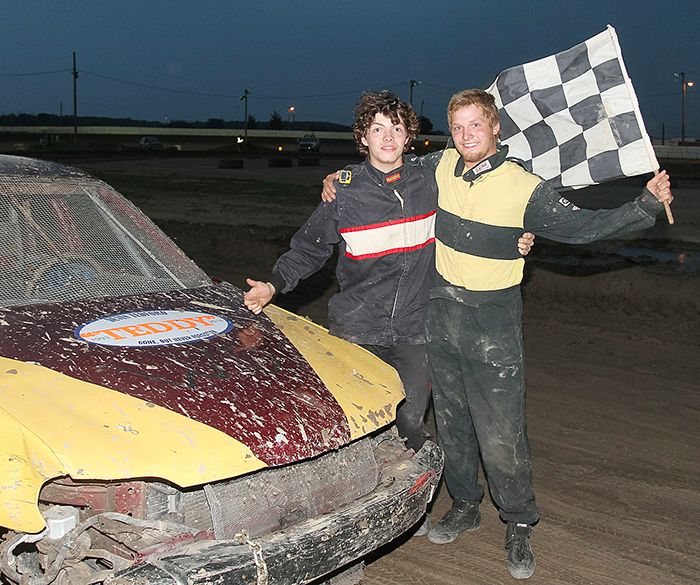 Blenheim drivers Shawn Hope, right, waves the checkered flag, with Jeff Schives, left, who presented a trophy in memory of his brother Cory to Hope after winning the July 26 feature. Schives has six feature wins and Hope five, as both drivers have 14 checkereds heading into Saturday’s AutoTech Bombers season championship race.

Two Blenheim drivers have dominated the class this season at South Buxton Raceway – Jeff Schives in the first half and Shawn Hope in the second.

Schives won six of the first 11 features while building as big as a 117-point lead atop the standings.

His lead over Chatham’s Chris Ellerbeck has been reduced to 54 points but he only needs to start the championship race to clinch the Bombers points title.

The second half of the season has belong to Hope, whose feature last Saturday was his fifth in the last seven weeks.

Hope has also won five heat races in the same time span as his 14 checkered flags in total are tied with Schives for the most in the division.

Schives will be going for his second straight championship race victory. He finished second to Blenheim’s Dylan Bonner in the point standings in the inaugural Bombers’ season.

Ellerbeck, who will start on the outside of Schives, has had an up-and-down season as accidents and breakdowns have kept him out of Victory Lane since June 7 when he won his third feature in a row.

Blenheim’s Austin Pickering is the only other feature winner with a good starting position, as the 14-year-old will start inside on the second row. Pickering’s first career feature win – and checkered flag – came on Aug. 23.

Tate O’Leary, a 12-year-old driver out of Port Lambton, has two feature wins and will start in the fifth row.

The only other Bomber feature winner this year is George Rock, but the Windsor driver suffered a broken arm away from the race track and James Beaulieu, also of Windsor, has replaced Rock and will start in the sixth row.

The Bombers, an introductory racing class with four- and six-cylinder cars, has almost tripled in size in car counts this season, with as many as 15 showing up on some race nights and a total of 22 cars making at least one appearance.

The Bomber championship night was originally scheduled for Sept. 13 but was moved to this Saturday for safety reasons, since the new infield track does not have its own lighting system and nightfall coming earlier each week.

Dick, who has dominated the class with 10 feature wins and 21 checkereds, holds a 124-point lead over Belle River’s Mario Toniolo heading into Saturday.

The most points a driver can accumulate in a night in the Modifieds is 115, which means Dick can clinch the title if he can come out of Saturday with a 116-point lead or better.

Toniolo, who has enjoyed his best season in his 10 years in the class, won his first Modified feature last Saturday.

Chatham’s Gregg Haskell, who has won two features in a row, moved into third place 62 points behind Jones but virtually needs the top two drivers to both sit out a feature to have any chance of a third straight division title.

Essex’s Doris Lajeunesse is third, 76 points behind Vanderiviere, who is looking for a fourth straight division title.

Blenheim’s Trevor Jones took a big step towards his first Tirecraft Mini-Mods feature as his second straight runner-up finish in last Saturday’s feature, coupled with a 17th-place finish for Cottam’s Rob Quick, opened the gap to 56 points. The leaders were only 21 points apart going into last Saturday.

John Pinsonneault, who won is sixth feature last Saturday, is 88 point behind Jones as a pair of DNF’s put a wrench in the Chatham native’s points title-hopes.

The Sport Stocks and Mini-Mods’ championship night is Sept. 20.

The grandstand opens at 5 p.m. and racing starts at 7 p.m. on Saturday.

About the Author: Mike Bennett

Mike Bennett has more than three decades invested in covering sports in Chatham-Kent. The veteran journalist is also involved with marketing for South Buxton Raceway.