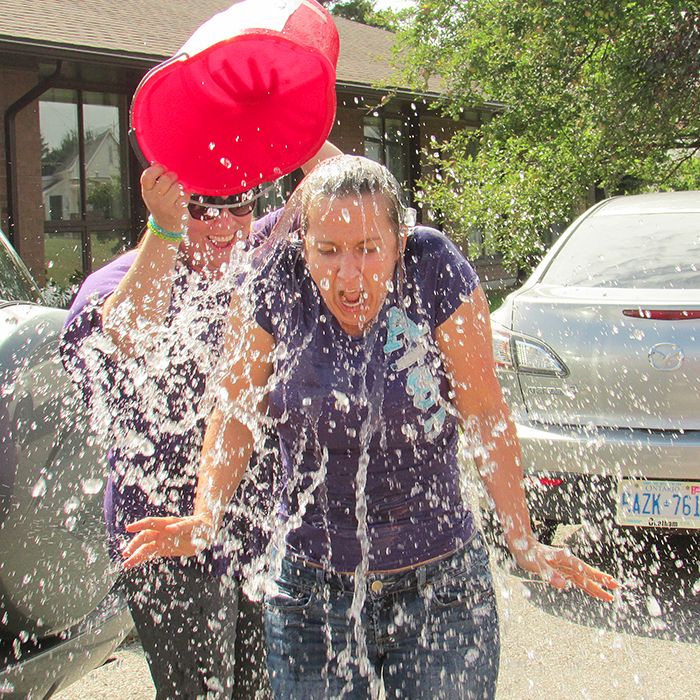 Meadow Park Nursing Home staff ended August on a fun note, taking part in the ALS Ice Bucket Challenge. One of the staff members’ sisters has the disease.

Many people are participating in the ALS (amyotrophic lateral sclerosis) Ice Bucket Challenge because they think it’s a fun way to raise money for a charity. For others, it hits closer to home.

For Shae-Lynn Jewell, an employee at Meadow Park Nursing Home in Chatham, being challenged was a way for her to support co-worker Mary Ann Ludwig, whose sister, Suzanne, was diagnosed with the devastating disease in 2012.

What started with a few people turned into a party Friday afternoon as more than 40 employees, family members and a resident took to the parking lot at Meadow Park and raised $1,100 for the Windsor chapter of the ALS Society in honour of Suzanne Sakaguchi. The money is still coming in and organizers hope to hit the $2,000 mark.

Wearing purple shirts, Mardi Gras beads and wrist bands in support of ALS patients, the people involved in the challenge lined up domino style and started pouring various-sized buckets of ice water over their heads while “Ice, Ice, Baby” by rapper Vanilla Ice played in the background.

Ludwig said she was overwhelmed by the support she has received from her co-workers as she and her family help Sakaguchi deal with the mental and physical challenges of having ALS.

“She lives in Edmonton and has two young kids and we have been travelling back and forth to help her and her family,” Ludwig said. “Her disease has progressed quickly and it is very difficult to get private care.”

The ALS clinic at the hospital in Edmonton has been great, according to Ludwig, in supplying support services such as the necessary equipment, and dietician and therapeutic services for breathing and swallowing issues, and counselling for the entire family to help deal with the effects of the disease. The support allowed Sakaguchi to stay at home as long as possible.

Moved to tears by the generosity and support of her co-workers, Ludwig thanked everyone for participating, and Jewell for organizing the event.

“It’s been tremendous the support and effort everyone has put in, Shae and everyone,” Ludwig said. “They are a wonderful support system.”

Jewell said she was happy to organize the event in honour of Suzanne and thanked Artic Glacier for donating 20 bags of ice for the event and Meadow Park staff and families for being so involved.