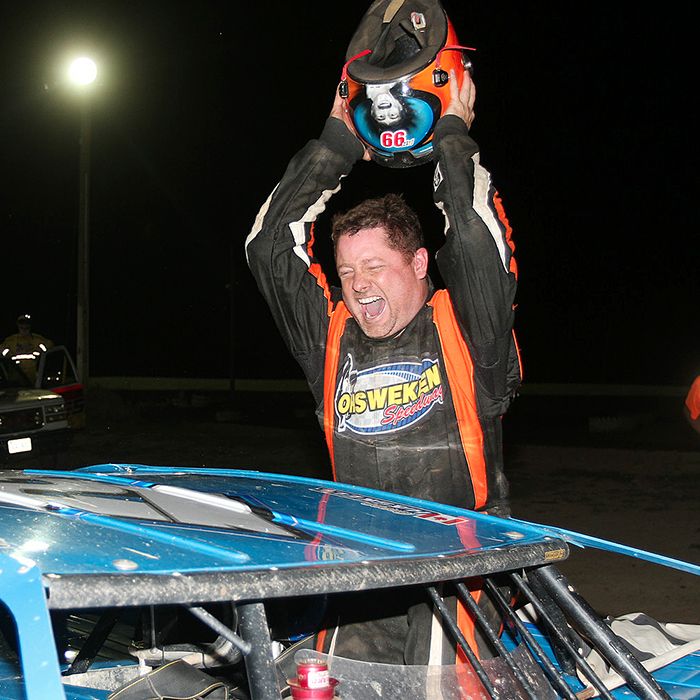 He waited seven years to win his father’s memorial race.
But the five minutes that followed the end of Saturday’s Rick Haskell memorial race probably seemed longer than seven years.
Gregg Haskell went from third place on the final lap to a dramatic victory when Brad Authier and Jim Jones collided coming out of turn four of the eighth annual Haskell memorial for the Westside Performance Plus UMP Late Models at South Buxton Raceway.
Haskell, with his fist pumping out the driver’s window, pulled onto the infield in anticipation of an emotional celebration.
Instead, a track worker told Haskell that the race wasn’t over because the caution came out and a second green-white-checkered finish would be needed to determine the winner.
“I didn’t see a yellow flag, I saw the checkered,” said Haskell, admitting he was livid inside the race car.
Race officials, however, reviewed the finish and determined the yellow flag never came out and Haskell was declared the winner.
“I was at Cedar Point last week and there’s no ride there that compares to what that race was like,” Haskell said.
The Chatham driver took the lead with three laps to go when the leader Erick Walker tangled with the lapped car of Mike Dale coming out of turn two, bringing out the caution.
Two more cautions set the stage for a first attempt at a green-white-checkered and a controversial final restart.

As Haskell was rolling to take the green, Jones and Authier both sped past, leaving the leader fuming.
“They definitely got the jump on me, the green flag wasn’t out, but for some reason, they (race officials) let it go,” Haskell said.
“I was fired up,” he continued. “You go from first to third before the race even hit the flagstand, I thought for sure I was going to go flying off the end at full speed.
“But I calmed myself down, I could see that I was gaining on them, I wanted to stay high and hoping something would happen between them … and something happened,” he said of the collision between Jones and Authier.
“It was karma … Dad was riding with me, he kept me calm,” Haskell said of his victory, as tears flowed freely as he was joined by his racing brothers Patrick and Jason, mother Deb, sister Kristen and the rest of the family and team members.
Patrick finished sixth and Jason, who led the first six laps, finished 11th.
“The feeling’s still unbelievable, it really hasn’t sunk in yet,” Haskell said about the biggest of his eight career feature wins.
Walker rebounded from his late-race incident to finish second.
“Congratulations to Gregg, I know how much race this means to him … I just made a mistake,” Walker said of his lap-17 accident.
Jones was credited with a third-place finish despite not crossing the line while Authier, who was able to roll, finished eighth, penalized for the last-lap accident.
Chatham’s Matt Wauthier and Ridgetown’s Dale Glassford rounded out the top five.
Jones padded his lead to 12 points over Glassford with two race nights remaining, including the season championship race on Sept. 13. Haskell, in a bid for a third straight title, is 62 points back.
Meanwhile, Mario Toniolo also had a momentous victory, his first feature win in his 10 years in the Schinkels Gourmet Meats UMP Modifieds.
“Wow, 10 years in the Mods … it’s been a long time coming,” the Belle River native said.
“This car is awesome … it just keeps getting better and better and better.”
Toniolo started on the front row and held off eight-time track champion Jim Dale Jr. of Shrewsbury over the final 19 laps.
Dale Jr. twice took the lead after restarts through turns one and two only to have Toniolo battle back both times to regain the lead on the bottom of three and four.
“The bottom line had some pretty good stick, it was the place to race tonight,” Toniolo said.
“Jimmy was good on the restarts but I learned his game and the last couple of restarts we were good.”
Merlin’s Jeff Daniels got by Dale Jr. with two laps to go to finish second. Chatham’s Brian Speelman and Leamington’s Joel Dick finished fourth and fifth.
It has been a breakout year for Toniolo, as the veteran driver has 13th top-five finishes in 17 features, including two seconds and four third-place finishes.
His turnaround season, however, has been overshadowed by Leamington’s Joel Dick, who has 10 feature wins and has been atop the point standings since opening night.
Toniolo, who has been second in the standings since May 10, reduced the deficit to 124 points with two race nights remaining in the season.
Grande Pointe’s Tyler Lozon won his second Tirecraft Sport Stocks feature, with Essex’s Doris Lajeunesse posting his second straight runner-up finish.
Merlin’s Steve Shaw, Kingsville’s Rob Young and rookie Dillon Moody, of Essex, rounded out the top five.
Chatham’s John Pinsonneault inherited the lead in the Tirecraft Mini-Mods feature with eight laps to go when Cottam’s Rob Quick broke while leading and went to post his fifth win of the year.
Blenheim’s Trevor Jones was the runner-up for the second week in a row, padding his lead to 56 points over Cottam’s Rob Quick, who led the first 12 laps before mechanical problems led to a 17th-place finish.
Dresden’s Matt Sorrell,  Larry Hart and 14-year-old Dylan Wolters, both of Kingsville, rounded out the top five.
Blenheim’s Shawn Hope won his fifth Autotech Bombers feature in the last seven weeks.
Merlin’s Cale Johns was second, followed by Ridgetown’s Nick Glassford, Blenheim’s Austin Pickering and Port Lambton’s Tate O’Leary.
The Bombers will run their season championship race this coming Saturday, followed by the Late Models and Modifieds on Sept. 13, the Sport Stocks and Mini-Mods on Sept. 20. 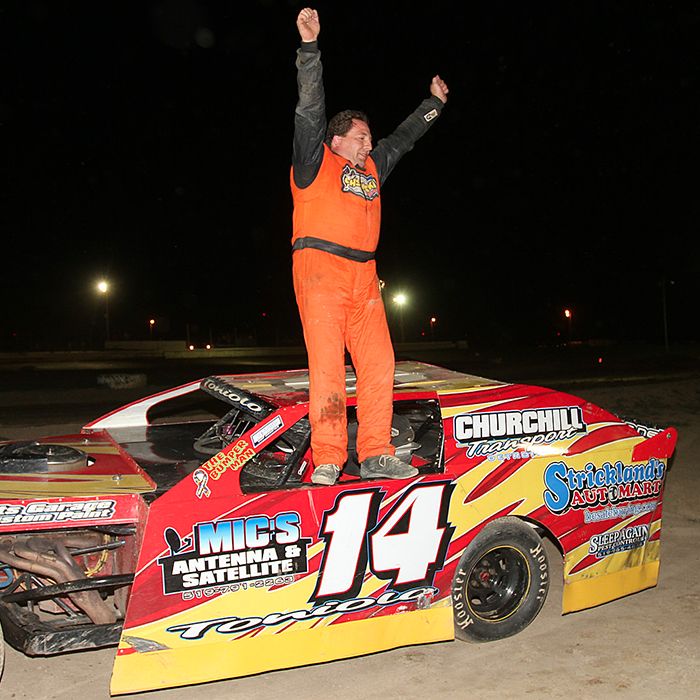 Mario Toniolo is pumped up after his feature win. (James MacDonald ApexOne Photo)

About the Author: Mike Bennett

Mike Bennett has more than three decades invested in covering sports in Chatham-Kent. The veteran journalist is also involved with marketing for South Buxton Raceway.