I heard legendary rocker Tom Petty on the radio recently talking about getting older. He recalled his parents were part of a generation that once they hit their 30s, most people would transform into “older” people. They changed their habits, dressed more conservatively, you name it.

Not Tom. He is 63 years young. And still very cool.

He was a teenager when I was born, but I can relate to what he says.

I don’t dress conservatively, don’t always behave like a soon-to-be half-century type, and sure as hell don’t have a side part in my hair (although I did clip it much shorter after my daughter was born).

I’m not a slave to brand name clothing (not that much of it would fit me), and admit I do smirk when I see men my age wander around sporting an Aeropostale shirt (come on, that’s like a middle-aged man drinking vodka coolers – these things really are for the younger generation!). Although if a pair of Lululemon pants made my butt look nice, I’d purchase a pair (sorry for that visual, folks).

I am not a slave to pop culture – I generally don’t like reality TV, couldn’t care less what B-list celebs are doing and where, and can’t name all the Kardashian clan or the Jersey Shore members (I do know that show is off the air, however).

What I do like is the cerebral battle between pitcher and batter, wide receiver and cornerback, offensive tackle and defensive end.

But at times I’m a curmudgeon (see Aeropostale comment above). I like what I like, and you sometimes have to use a stick of dynamite as a persuader in order for me to see things differently.

I like my classic rock music (especially the likes of Tom Petty!). I eat meat regularly.

I like sipping on a cold beer or two, after work or on the weekend, often in the backyard, near the barbecue or hot tub.

As for travelling, I can take it or leave it (although my wife and daughter prefer that I take it). I’ve had some incredible vacations, but some of my most relaxing moments on the planet have taken place in my own backyard, or that of a friend’s.

One of my favourite views is that of the sunrise over Lake Erie, viewed from a chair beside a dying bonfire on the beach. Then again, seeing the sun set over Lake St. Clair is pretty special too.

And both views are here in Chatham-Kent.

I am blessed to live here. For the rest of you, sorry, but you appear to be stuck with me.

Let there be bacon!

I recently caved into curiosity and cooked “Bacon Explosion” on the barbecue. We weren’t disappointed, but I have some tweaking to do on this tasty number.

The pressure was on. I was cooking for Sensei Jeff and his better half, Tammy.

Creating this dish is very easy. But in the future, I’m going to get a larger roll of tin foil, as the traditional size was too small to contain the original recipe.

That recipe called for two pounds of bacon and two pounds of sausage meat. I tried to follow it, but, aside from my heart almost stopping at the sight of all that meat, I had to make a few adjustments.

We cooked a full pound of bacon in advance. That’s the “stuffing.”

While I had the Big Green Egg barbecue heating up for a slow, indirect cook, I prepped the rest of the meat. It involves weaving a pound of bacon together.

Onto the weave went a sprinkling of seasonings. You don’t need to add anything with salt in it, as the bacon and sausage meat have more than enough for this dish.

On top of that went the sausage. But after cutting open one tube of the stuff and flattening it out, I could not justify adding a second pound of it. That would have been extreme meat overload. No way would the weave have folded up, as we added the cooked bacon to the middle.

As it was, it was hard enough to close this sucker up. I used the tin foil to help with the rolling process, and there was no way to close off where one side met the other. Maybe next time I’d use some butcher’s string.

I left the weave in the tin foil and placed it on the grill, with a drip pan underneath. The problem was the pan wasn’t as wide as the bacon/sausage log, so I slid it over to catch the drippings on one side. The other dripped out onto the indirect cooking plate and sizzled away as it cooked.

We were “stuck” outside sitting near the barbecue, smelling such succulence as it cooked for more than two hours at between 250 F and 300 F (it started hotter, as I’d stoked up the coals too much).

We four adults spent a nice time chatting and laughing away the afternoon, nibbling on some shrimp that was heated up on the barbecue right beside the main dish. 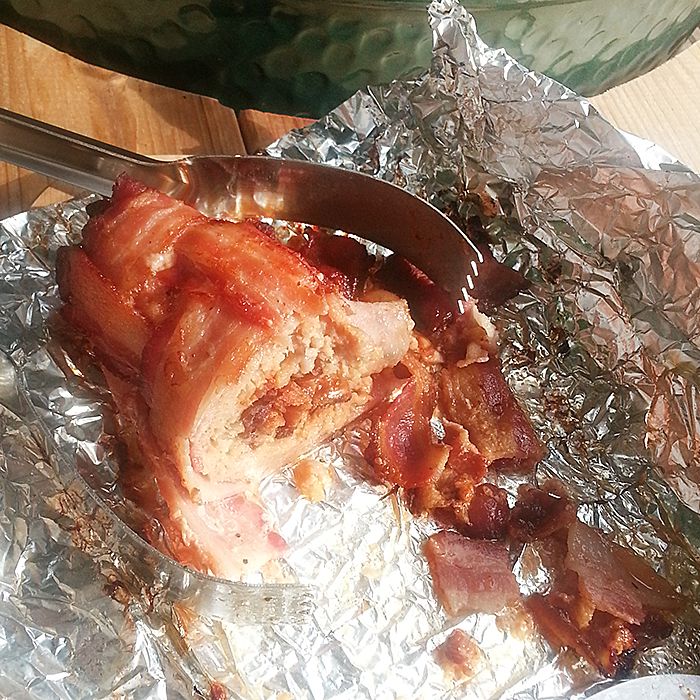 When the internal temperature topped 165 F, I pulled the bacon explosion off the heat. We sliced it vertically and put it on buns. We didn’t even add condiments.

As good as it was, I will tweak things next time around.

For the record, we did have salad too, but had to save that for a little later.

I must say, the bacon explosion shouldn’t be an every-week kind of meal, considering the fat content that’s in this sucker. But every once in a while, I plan on cooking it when we have folks visit.

Sensei Jeff gave me a great tip when I did my first pork shoulder on the barbecue – use mustard as your conducting liquid. I’d call it a marinade, except its primary task isn’t to tenderize the meat, but rather to help your spices stick to the meat and allow their flavours to penetrate.

My wife in the past has used olive oil to assist in the process. Fairly healthy, but the oil can cause flare ups on the grill, and does add a bit of fat to the cooking process.

So recently I pulled a bottle of applewood smoked bacon flavoured mustard out of the fridge and put a little on either side of the chicken breasts I was about to took, adding Dizzy Dust seasoning as well.

I was a little worried, however, as to whether or not my daughter would like it, as she is 12 and, while willing to try certain things, is still a rather picky eater. So I did the smart thing and didn’t tell her what was on the meat, letting her instead focus on making a salad as I did the meat.

The chicken and salad were excellent, with my daughter wondering after her first delightful bite what I used as seasoning. I told her and her response was, “That’s it?”

The mustard delivered great flavour, and with very low calories, only a little salt, and no added fat.