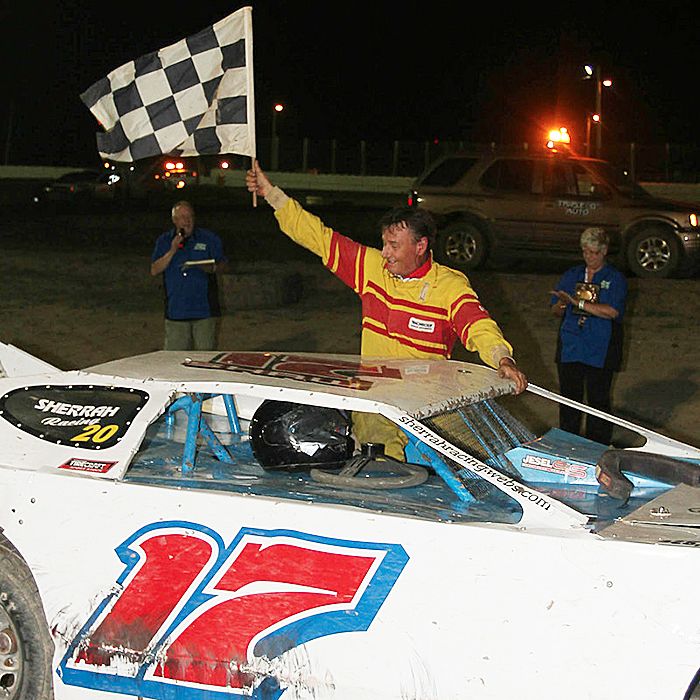 But not this one.

“This one’s going home with me,” Shaw said, after winning his first Len Bryden memorial race in the Tirecraft Sport Stocks on Saturday night.

Bryden was known as a stern but fair promoter.

If there was trouble in a race on a Saturday night, the guilty parties would be summoned to Bryden’s house during the week, a meeting which usually included a barbecue lunch.

“I was never there … I was good in those days,” Shaw said, with a smile.

“When I knew this week was his memorial, it made me start thinking about all the help he gave me back when I was starting out,” Shaw said of Bryden.

“He helped me put a van on the road so I could tow my race car to the track.

“Some people just go out of their way to help, and Len was one of those guys,” Shaw said.

The pre-race ceremony also paid tribute to Wayne Daniels, 57, who died on Friday.

The previous Saturday night, Daniels was in Victory Lane with his son Jeff and son-in-law Brian Speelman after they finished first and third, respectively, in the Schinkels Gourmet Meats UMP Modifieds mid-season championship.

Shaw, and all of Saturday’s feature winners, reflected on Daniels’ dedication to racing and willingness to help everyone in the pits.

“Wayne’s a great guy, if you needed a hand, he’d be there … he couldn’t help out enough,” Shaw said of Daniels.

When Leamington’s Joel Dick’s car was damaged in the same race that Jeff Daniels won, one of the first people to rush over to help was Wayne.

“We were in trouble and he came over to help us, that’s the way he was,” Dick said of Daniels.

“It was sad pulling in here tonight and not seeing him,” said Dick, who won the Outhouse memorial feature.

In the Bryden memorial, Shaw took the lead from Jake Hooker, a 13-year-old rookie from Chatham, on lap three and led the final 17 laps for his fourth feature win of the season.

“I couldn’t tell who was behind me, but I knew they were there, Shaw said.

“I just concentrated on driving my own line, getting in and getting out (of the turns) square and not letting the car get sideways.”

Blenheim’s Andrew Reaume won his second straight DeWael memorial in the Westside Performance Plus UMP Late Models, leading all but two laps when Chatham’s Brad Authier got by on the outside after a mid-race restart.

“I thought it was Jimmy and he prefers the bottom, then when I saw it was Brad, I was like, ‘that wasn’t a good idea,’ ” Reaume said.

Authier took the lead and brought Ridgetown’s Dale Glassford with him to the bottom, leaving Reaume in third after the restart.

But Reaume found traction on the high side and powered his way around both cars to regain the lead two laps later and wasn’t challenged over the final 10 laps.

Glassford hung on for second with Authier third, followed by Chatham’s Gregg Haskell and Jones.

It was Reaume’s third win of the season in four features driving for Chatham’s Erick Walker.

Dick started on the pole cruised for the first half of the race before Merlin’s Brad McLeod took advantage of lap traffic to pull beside the leader.

McLeod took the lead on lap 16 but Dick got a good run to regain the lead on the next lap.

McLeod finished a season-best second, followed by Reaume, who was driving for Eugene Hoekstra, in third.

Clayton Smith, of Taylor, Mich., finished seventh as he had Speelman’s No. 22 on his car, while Leamington’s Justin Coulter finished 10th carrying Daniels’ No. 20 on his panels.

The Outhouse memorial was Dick’s ninth feature win of the season as he also won his heat and dash races, one week after his car was severely in a crash on a restart while leading.

“To rebound after that is awesome,” Dick said.

“There was a lot of time and money and hard work this week to get us back where we are,” said Dick, who took the car to Ohio for repairs.

Cottam’s Rob Quick had pretty well resigned himself to a second-place finish as Merlin’s Steve Shaw Jr. dominated the early laps of the Schives memorial in the Tirecraft Mini-Mods.

However, the race changed when the caution came out for the only time with eight laps to go.

“Thank God the caution came out, if not, I don’t know if I would have got by Steve Shaw,” Quick admitted.

Shaw elected to restart on the inside for the double-file restart, which worked into Quick’s favour as he had a good run from middle to the top of the track.

“When he (Shaw) chose the bottom for the restart, I knew I’d be able to pull him out of (turn) two and that’s how I got him,” said Quick, as he pulled out to a commanding lead and had a full-corner advantage over second-place Matt Sorrell, of Dresden, when the checkered flew.

The third Hope brother, Shawn, won the Autotech Bombers feature and his heat for a second week in a row.

The Southern Ontario Sprints return to South Buxton for the second and final time this season this coming Saturday.