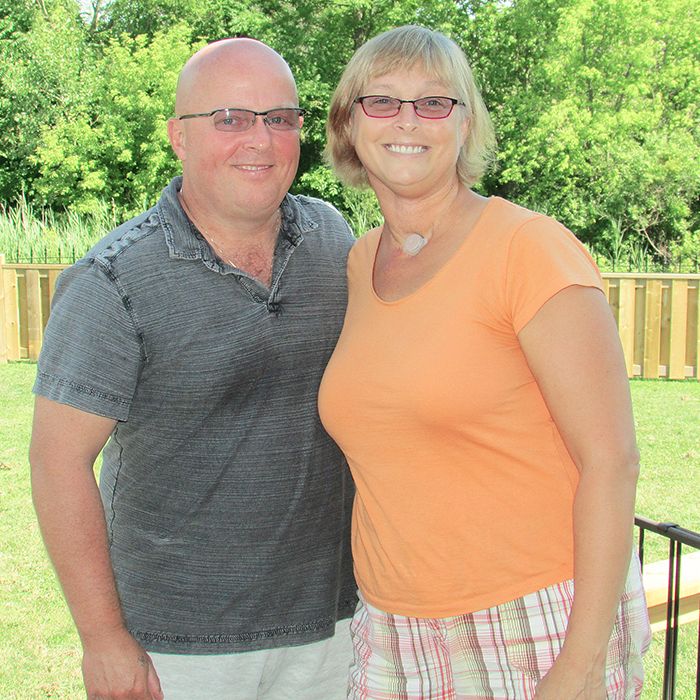 Kathy Poirier relaxes in her Chatham backyard with her husband, Claude. For the second straight year, the Stage 4 adenoid cystic carcinoma victim is organizing the Head & Neck Above Cancer Walk.

In March of 2012, Kathy Poirier received the grim news by her doctor. She had cancer.

And not just any form of cancer, but a very rare strain of the disease – adenoid cystic carcinoma (ACC).

There’s no cure. But that doesn’t mean Poirier, 45 doesn’t have hope. If she’d been diagnosed with ACC 10-15 years ago, she’d have likely been dead by now.

Instead, the mother of four and grandmother of three underwent extensive surgery in London and has an extended lease on life.

The surgery involved a laryngectomy – she had her vocal chords removed – a thydroidectomy and an esophageal rebuild. To call it invasive would be an understatement.

While the surgeries and radiation treatments got the worst of the cancer, it’s not gone.

“I still have cancer. I will always have cancer,” she said through a special voice box. “There are 27 tumours in my lungs.”

Husband Claude Poirier said ACC is a slow-growing type of cancer, however.

“It does not go away. The best you can hope for is a period of remission,” he said.

Through it all, Poirier remains positive. She’s so thankful of her extension on life she wants to give back to the group responsible – Head & Neck Cancer Research at London Health Sciences Centre’s London Regional Cancer program. In fact, she started last year by organizing the Head & Neck Above Cancer 5K Charity Walk.

The inaugural event raised more than $19,000. This year, Poirier would love to double it at this year’s Aug. 10 walk, which starts at Western University.

She would like to steer as much funding as possible to Dr. Anthony Nichols, a member of the department of otolaryngology at Western University, and the man who operated on her.

“He’s my hero. He saved my life,” she said. “I don’t know how else to say thank you except to raise money for his research.”

Another big reason Poirier started the fundraiser was to raise awareness of head and neck cancer.

“A lot of people don’t know what it is. Most people assume it’s habit related – drinking, smoking, etc.,” she said. “But it’s not. There’s no known cause and it kills more people than breast cancer.”

But it doesn’t get the research funding, she added.

“Cancers – they’re all equally bad, but they are not equally researched or funded,” Poirier said.

That in no way criticizes the Canadian Cancer Society, an organization Poirier and her husband greatly respect.

“I am not by any means putting down the Canadian Cancer Society, because they do a lot of great work,” she said. “It’s just frustrating that the society funds some reasearch into head and neck cancers, but not specifically to ACC. It’s too rare; it’s an orphan cancer.”

Head and neck cancers come with a 50% mortality rate. For survivors, such as Poirier, lifestyles are forever altered.

Just to reach that point after removing her vocal chords, doctors had to rebuild her esophagus, using muscle pulled out of her left forearm. They then added a small valve in her neck to allow her to speak, using the muscles in her esophagus.

“I picked it up just like that,” she said of having to learn to speak in a very different manner. “There’s nothing that can shut me up!”

She had her major surgery in April of 2012, and had the voice prosthetic in place less than a month later.

During her radiation treatments, she lost her sense of smell and taste.

“Imagine sitting down to diner with friends and you can’t taste the meal. Eating is such a social thing,” Poirier said.

Yet she’s persevered and is now helping others. Her husband said she’s an inspiration to others.

“She’s too humble. She’s doing a lot of good for complete strangers,” he said.

To learn more about the walk, visit www.lhsf.ca/headandneckabovecancer. The website allows you to also print off pledge forms.