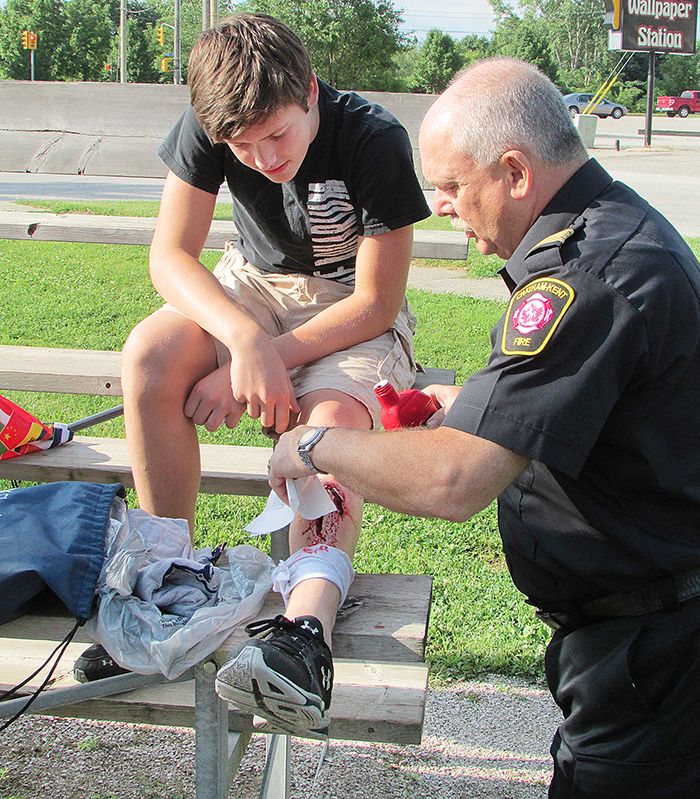 I couldn’t help but notice when covering the mock accident/disaster last week at Percy Park in Chatham how professionally the paramedics and firefighters were. They treated it like the real thing, which was a boon to the 10 MedLINCS summer camp teenagers on hand.

These teens took part in the annual MedLINCS program, where high school students get an up close view of what is involved in the jobs of various professionals in health-related fields.

Had the firefighters or EMS people treated the mock event as a joke, the kids would not have received the vivid experience they did.

From the application of the fake injuries, makeup and blood by assistant fire chief Ric Scharf to the injury assessment, reassuring talk to victims while they awaited treatment, to strapping the victims onto a back board and transferring them to a stretcher, it was very well done.

And it was an eye opener to the students in regards to the professions and the seriousness of such an accident. In the mock scenario, a car ran into the bleachers at a baseball diamond, injuring five people.

As for Scharf, he could have a career in Hollywood special effects makeup when he retires. The man is pretty darned good at making the injuries look gruesome and quite real.

Then again, shopping for bargains the day after Halloween helps to keep his makeup kit stocked, I’m told.

Scharf said he takes a little ribbing from his kids and fellow firefighters for the fact he even has a makeup kit, but doesn’t mind.

Of steaks and pulled pork, oh my!

We had family in from the West Coast for the weekend to attend a family reunion. It was a great get together, but unfortunately for them, they had to put up with my rather opinionated self for the weekend. I tried to placate them with food.

I showcased the new barbecue, cooking some succulent steaks Friday night, and then got bold, putting on a pork shoulder for 17 hours to take to the reunion.

Sensei Jeff (the buddy who coerced me with juicy, tasty meat to purchase my Big Green Egg barbecue) has a device called a guru that measures the temperature inside the egg and controls the airflow via a small electric fan. But I’d heard the Big Green Eggs were great for holding temperature for long cookings, so I politely declined his offer of his guru.

I wound up checking it every hour or so as I dozed in a chair in the living room. I’d pop outside, see the temperature was a bit off, and adjust, adjust, adjust.

Off to bed I went.

And I must point out, I really didn’t mind stepping outdoors, as the moon was so bright on the weekend, it felt more like twilight than the wee hours of the morning.

But once my head hit the pillow, I didn’t get back to the barbecue for four hours. Upon my morning check, the temperature read less than 100 F. Something had gone awry.

I pulled off the 17-pound chunk of meat, yanked off the indirect plate, stirred the coals, and pulled out the weed torch. Some coals were still burning, but over the course of the evening, much of the coal bed had died out. A blast with the torch quickly changed all that. We were back up to temperature in no time.

It added about 45 minutes to the cooking time, but in the end we had incredibly succulent pork.

Thanks to my wife, it went from tasting darned good to downright awesome, as Mary pulled apart the pork and added her own sauce, which was a mix of ketchup, balsamic vinegar, barbecue sauce, garlic, onion and only she knows what else. It was beyond delicious.

When it comes to sauces, I defer to her expertise. She is truly gifted.

The pork got attacked at the reunion, which made me quite happy.

One of the oddest sights greeted me when I popped outside to check on the barbecue after dark Friday. A cloud of mosquitoes circled the top of my egg. I would have thought the smoke from the charcoal would keep them away, but at such a low temperature, it was burning pretty clean.

However, I am betting the moisture from the pork lured them like blood in the water to sharks.

I’m surprised the same thing didn’t happen with my neighbours in the morning. The smell of that pork shoulder cooking was mouthwatering!

Of politics and geography

A great thing about a family reunion is it can bring people together from all parts of the country. We had West Coasters and Manitobans mingling with Ontarians. A fun time.

On Sunday, we enjoyed a follow-up afternoon sitting in the shade in a backyard. An item that was largely off limits Saturday was politics. Up it rose on Sunday, as two of the westerners engaged with the host. Let’s just say their political beliefs were largely out of alignment.

Single-malt Scotch, however, crosses all political barriers and cures what ails a person.

Speaking of single malt, two flasks of it made its way to Maple Leaf Cemetery Sunday, as a gathering of the clan went from gravesite to gravesite, remembering loved ones. At several spots we’d share a nip, and pour a little on the grave to honour our kin.

It is an odd tradition, but very appropriate for this family. Normally, for my late father-in-law, we’d pour a little rum for the former navy man. But he’d have understood the use of Scotch, and appreciated the quality of it.

Saying ‘No’ on the bridge