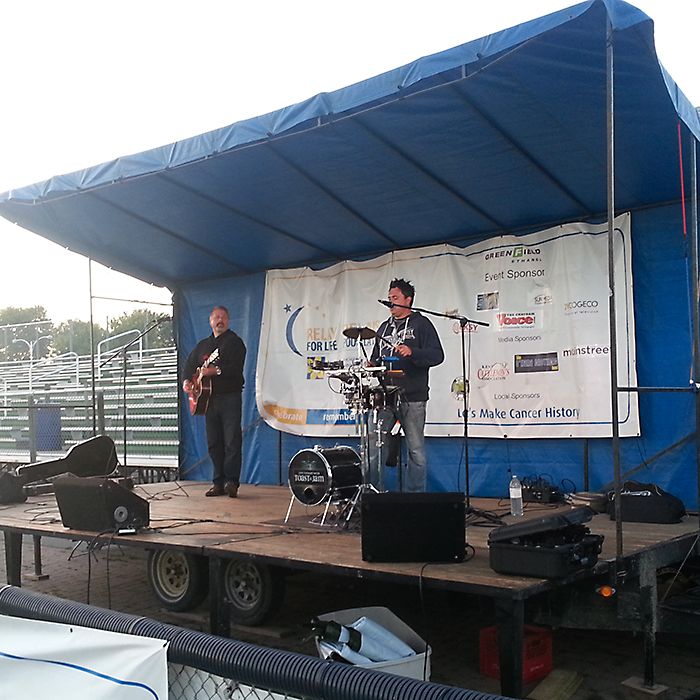 Toast and Jam revs up the crowd as the sun comes up on Relay For Life Saturday.

What a weekend in Chatham-Kent for this guy! Yeah, I’m talking about me. Being a bit selfish.

Relay For Life Chatham took place Friday and Saturday and it was incredible. With 19 fewer teams, participants managed to raise as much money as the event hauled in the previous year – $187,000!

I had the pleasure of chairing the event this year. People were coming up and congratulating me, but I can’t take much, if any, of the credit. I am very lucky, as this event is blessed from all angles. From the incredible staff at the Chatham-Kent unit of the Canadian Cancer Society, to the experienced and energetic steering committee members, to the equally rambunctious corps of volunteers, to the hundreds of Relay participants, those are the people who did all the heavy lifting.

Our luminaries sold out, and the track was beautifully lined and illuminated by the 1,500-plus candles placed in memory or honour of a loved one who battled or is battling cancer.

Our committee members had various duties to perform the day/night of the event. I was one of those people who got plugged in where needed. Sure, I had the title as top dog, but the truth is these people knew more about their individual tasks than I knew about things, so if I could be of help setting up a tent for a bit here, putting out lawn chairs for one lucky VIP team there, helping organize the Fight Back booth, filling in at the Information Tent as needed, and play early morning MC (a very weak version of the evening expert, George Brooks), then so be it.

It was the least I could do to help such great people.

The logistics folks are so laid back, and they are heavily armed with a can-do attitude. This despite the fact they spend about 36 hours straight moving everyone else’s stuff around, from the tents and equipment of other committee members, to the coolers, chairs and tents of the participating teams; and fix everyone else’s problems.

I really respect what these people do and how quickly they can accomplish it, and always with a sense of humour.

They’ve been at the task for some time. There are other Relay veterans on the committee, and they are the grounding point for us rookies. But a lot of the rookies brought a great deal to the Relay table. Some came on with only a couple of months to get up to speed, and they exceeded all expectations. A number were also on Relay teams, so they were doing double duty, and doing it very well.

The entertainment was awesome. There were usually multiple things for participants to do all night long, from watch live music, to take part in games, such as scavenger hunts, to doing Zumba or getting a massage.

There was no shortage of food – all night long. From dinner, to evening chili, to midnight pasta and pizza, and onto breakfast, no one went hungry.

Much of that was made possible thanks to donations from local businesses and local people. None of the bands charged us a penny. Most of the food was donated. Such giving of time and goods is amazing.

And people came up and thanked me? I’m just the conduit. I’ll send the thanks to everyone who made the event the success it was – the people I’ve mentioned above.

I have to single out one very special person, however, Rachel MacLeod of the Cancer Society. We worked closely together for months on Relay, and she was such a great guide. Rachel has done this for many years, and remains energetic and positive during all the evening meetings, the quest to drum up new teams and sponsorships, and throughout her time at the event.

I’d have been lost without her to steer me along. Just an incredible person.

I hope to be back as the chair of the 2015 Relay, and I really hope to see more of you out to support such a great night and important cause.

So, how do you follow up Relay For Life? We did it by attending another cancer fundraiser Saturday night at Branch 28 Legion on St. Clair Street. It was a murder mystery dinner that raised funds for the Shopper’s Drug Mart Walk to End Women’s Cancers. I had the pleasure of having a bit part in the show, playing the fictitious owner of Chatham’s equally fictitious comedy club.

They killed me off shortly after my speech. Hmmm.

But the night was hilarious, as a comedy troupe from Toronto, brought here by Brandon Trainor, who attended UCC.

Following the dinner theatre, the local band Objective Unknown, with Daryn Trainor (yes, Brandon’s brother) on bass and lead vocals, played a set. These university-aged guys had a busy weekend, as they played the Vampire Set in the Food Tent at Relay For Life at about 3:30 a.m. or so. I sneaked in a little nap about that time of night, but heard they rocked the place and were asked to keep playing by the crowd.

It was another good night in Chatham.

We spent Father’s Day doing what I wanted to do – putting mulch down in some of our gardens and hanging out around the yard.

A trip to Bayside Brewery was also in the cards, and we lucked out. We pulled up and the place was hopping, so much so there was no parking. But one of the owners, Ken Royal, saw us and said one of the cars out front was leaving. We wound up with the best parking spot in the place!

And we had yet another great dinner out there, overlooking Rondeau Bay, while sampling a variety of their brews. Great end to a great weekend.