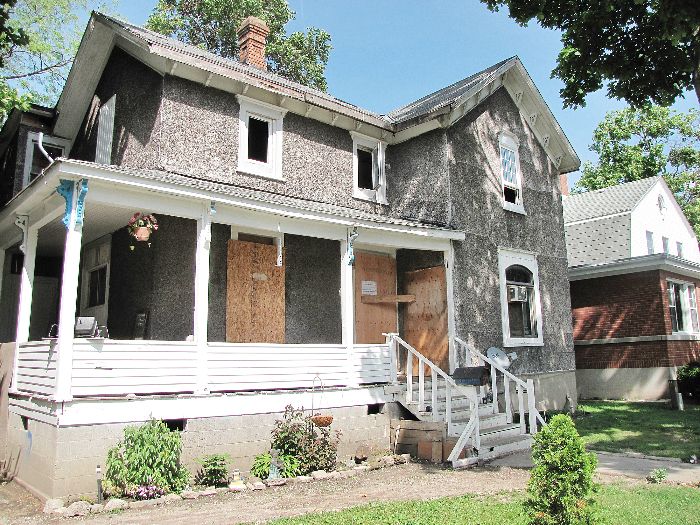 An eight-unit rooming house at 47 Victoria Ave. has been boarded up after municipal and provincial agencies conducted an inspection on June 6. Several infractions prompted the authorities to shut down the house. The utilities were disconnected and the occupants were relocated after the city issued orders to remedy an unsafe building and to prohibit occupancy of an unsafe building.

As city officials work with the owner to repair a run-down rooming house in Chatham, a neighbour isn’t convinced his troubles are over.

Al Fournier has lived next door to the eight-unit building at 47 Victoria Ave. since 1985.

“I could tell you stories that would pop your eyes out,” said Fournier. “Everything was going on there, drugs in and out. We found syringes in our backyard … my grandkids come here and play.”

The property is now boarded up and the tenants have been relocated after members of the police, fire service, the city’s building department, the Technical Safety and Standards Authority and the Ontario Electrical Safety Authority inspected the property on June 6.

Several infractions were found that prompted the authorities to disconnect the electricity and gas.

“Smoke alarms weren’t there, the sprinkler system wasn’t up to code,” said Lacina, describing the various problems. “They didn’t maintain the fire separations, improper venting of the natural gas. The appliances for natural gas were missing parts and were a safety issue. There were numerous electrical issues.”

He said six of the eight units that were occupied at the time were in a deplorable condition.

Lacina noted that one occupant was heating a unit with the burners of a gas stove.

In addition, the sanitary facilities, including the toilet and the shower, didn’t work.

Lacina, along with building and fire inspectors, met with the owner at the property to go over the requirements.

Among other things, he’ll have to apply for building permits for the repairs and have the work inspected and approved before the occupants are allowed to return.

“My understanding is he is seeking to get his tenants back,” said Lacina.

Fournier is not looking forward to that prospect.

“I’m just fed up. I really don’t want to have anything to do with it anymore,” he said, noting that he has tried to sell his house since February.

“Everybody has said the same thing: ‘We would give you an offer… only for next door,’” said Fournier.

Chatham-Kent police have been called to 47 Victoria Ave. almost 60 times in the last two years.

Const. Renee Cowell said there were several reasons for the calls, including drug offences, assaults, domestic disputes, disturbing the peace and trouble with youth.

According to Cowell, the combination of calls sparked the inspection on June 6.

“We all came to the table and realized for the benefit of the community we need to come together and do something in regards to this specific address,’ she said.