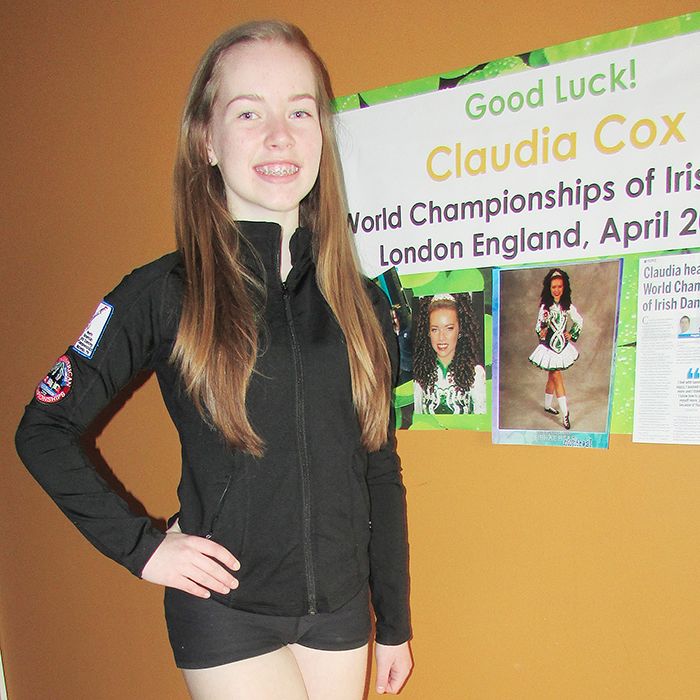 A decade of dedication has paid off for Chatham’s Claudia Cox, who is heading to England to compete in the World Championships of Irish Dance.

Cox, 14, qualified for the worlds at the Eastern Canadian Championships in November and competes in London, England April 14.

Cox said she became hooked on Irish dance after seeing her first show at the tender age of four. It happened to be “Irish Fire,” choreographed by Devin Cornell, who runs the Cornell School of Irish Dance in Chatham.

“The sound of the hard shoes … the way it works to the music” is what Cox said hooked her on Irish dance. “Since then, it’s stuck with me,” Cox said.

At the time, Cornell didn’t offer classes for beginners, but fortunately for Cox, that soon changed. By age five, she started at the school.

She’s gone from practicing half an hour once a week to five days a week, between 12-15 hours total.

Cox hopes to turn her dancing into a career.

“I have so much time put in, I don’t see myself doing anything else,” Cox said, adding that in five years she sees herself “performing in a dance show and touring.”

But more immediately, it’s the stage in London that matters. She flies out April 10 and competes four days later. The world championships run until April 21. Cox and her family will watch some of the competition, but also treat the time as a vacation, returning April 20.

At the eastern regionals in November, Cox said about half of the competitors qualified for nationals, and from that group, about 15% qualify for the worlds. She’s the first Cornell student to compete at the worlds.

And now, she’s about to compete on the global stage.

“I look forward to the competition,” she said. “A dream is just being on the stage.”