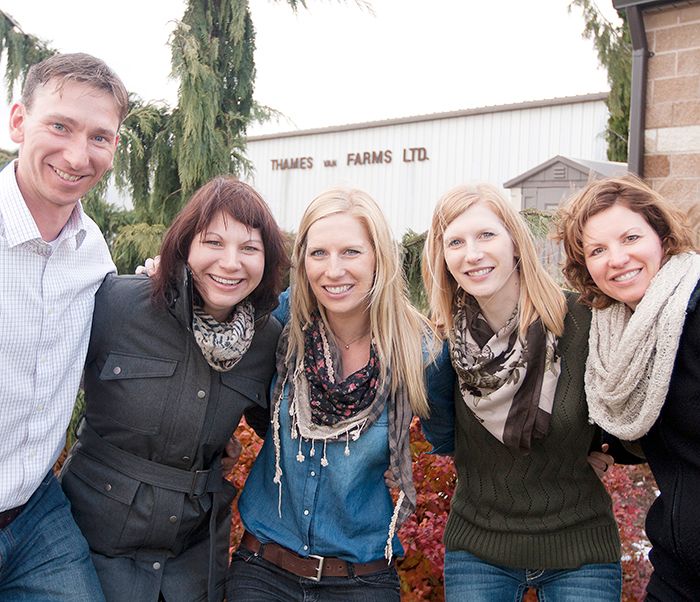 After a long day of hard work, each VanRoboys sibling goes home, and knows they are lucky.

The family of five adult brother and sisters – Kim Hinnegan, Kelly Deline, Krystle VanRoboys, Jen Aitken and Jeff VanRoboys – are all successful entrepreneurs who own and run their own business locally.

But more than anything, they know they are lucky to have each other.

Their story started in 1964 when their grandfather Norm VanRoboys created The Pickle Station. Years later, their parents Don and Sandy VanRoboys took over the family business of grading cucumbers.

Today, this third generation of entrepreneurial VanRoboys has a wide range of interests and skill sets they have developed over the years and applied to their own work lives.

Their businesses are very different from each other, but they do their best to help each other out in any way they can and never cease to be an inspiration to each other.

Jeff, who is not afraid to admit he is addicted to work and the only male sibling in a family of females, helps run The Pickle Station today, as well as his own farm. He said he never finds himself bored with what he does.

“We’ve all worked together for basically our whole lives,” Jeff said of himself and his sisters at the family business.

“If anything, I think we learned the ins and outs of working together – the good and the bad as there always are when you work with family,” he added with a laugh.

Kim Hinnegan created The Paper Pickle, a paper crafts store, with her sister Kelly Deline 10 years ago and runs it alone now in downtown Chatham. Hinnegan sublet space off DeKoko’s on Fourth Street, which closed at the end of March, but The Paper Pickle remains.

Approximately five years ago, Kelly joined her brother at The Pickle Station to help run the ever-expanding business.

Twin sisters Jen Aitken runs her own baking business called the Homebaked Kitchen Company, while Krystle VanRoboys is the photographer in the family, combining it with her love of farming to create agricultural- and Western-themed photographs.

“We kind of all feed off of each other,” said Krystle.

“We always want to do more,” she added.

Becoming entrepreneurs is something they all agree is in their blood. Their father ran a trucking business with his siblings when he was younger, and today, both of their parents run their own ventures since moving on from The Pickle Station.

“There is nothing else I ever want than to run my own business,” said Jen.

The key ingredient to making their dreams a success?

The learned from an early age from their parents that when work is there, you work.

Their rewards for being independent? They said being able to create their own hours, take control of their own growth plan and make key decisions that will influence their future top the list.

As for what comes next for the VanRoboys, they say their future in Chatham-Kent is bright.

“There’s great opportunity here in Chatham-Kent if you take it,” said Jeff.