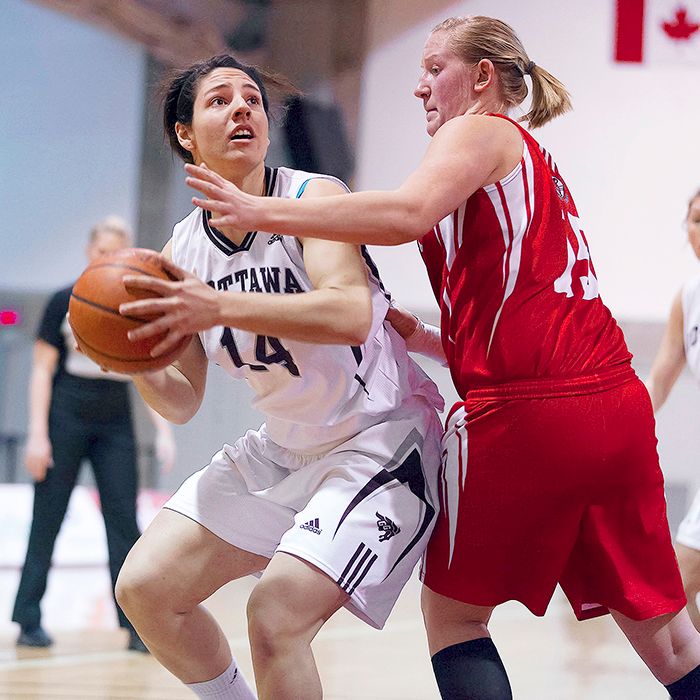 Shauney Fischer guards an Ottawa Gee Gee in Ontario women’s university basketball. Fischer and Erin Sarapnickas are Wallaceburg athletes who’ve bonded even closer since going away to school. (Photo by Richard A. Whittaker)

When many Chatham-Kent athletes move away from home to play at the university level, they enter a new city and face new challenges, with little more than their equipment to remind them of home. For Wallaceburg’s Shauney Fischer and Erin Sarapnickas, however, they took something else; each other.

Fischer and Sarapnickas are finishing their second year playing for the York University Lions women’s basketball team. Prior to that, the two, who each stand 6-foot-1, played club basketball for the Windsor Valiants, and also played high school basketball together with the Wallaceburg Tartans.

“It feels comforting having her here with me at York,” said Fischer of Sarapnickas. “It’s almost like I got to take a piece of home with me when I left for university. Erin and I know each other so well both on and off the court, so having her by my side at all times is so amazing.”

Not only has the pair played together for the last six years, the two also now live together, and study in the same kinesiology program at York University, making the transition from the small town, to the City of Toronto easier.

“I never saw myself living in Toronto, going to school at some huge campus,” explained Sarapnickas. “I always wanted the small campus not too far from home. I’m a simple, small town person, but knowing Shauney would be there gave me a peace of mind, knowing I would at least always have one familiar face.”

On the court, Sarapnickas and Fischer push each other to be better as two of York’s most dynamic forwards. In practice, they serve as shooting partners, and workout partners. At home, they help each other study, and serve as moral support, making their bond both on and off the court deeper than typical teammates.

“We’re like sisters really,” said Sarapnickas. “This is our second year now living together and we still have a strong friendship. Not only between ourselves, but also with each other’s family. Both on and off the court, we get along really well.”

“Erin and I are past the point of friendship; we are basically sisters now,” echoed Fischer, who won the prestigious Jack Parry Award in her final year of high school. “We literally tell each other everything and spend more time together than apart.”

“Shauney knows me best here at York,” said Sarapnickas, “and she has always been there for me when I needed it.”

“It’s nice to have someone who knows where you’re from, understands you inside and out and can ground you,” said Fischer of Sarapnickas.

“I would walk through fire for that girl and I know she would do the same for me.”

Fischer and Sarapnickas will return to York next season in hopes of bringing their team closer to an OUA title, and to continue their studies in kinesiology.

About the Author: Ian Kennedy

Ian Kennedy is the owner and editor of the Chatham-Kent Sports Network (www.cksn.ca). Ian has also worked as a columnist and reporter for the Chatham-Kent Daily Post. A University of Western Ontario graduate, and secondary school teacher in Chatham-Kent, Ian's sportscasts and news contributions can be heard each week on 99.1 CKXS FM in Wallaceburg.