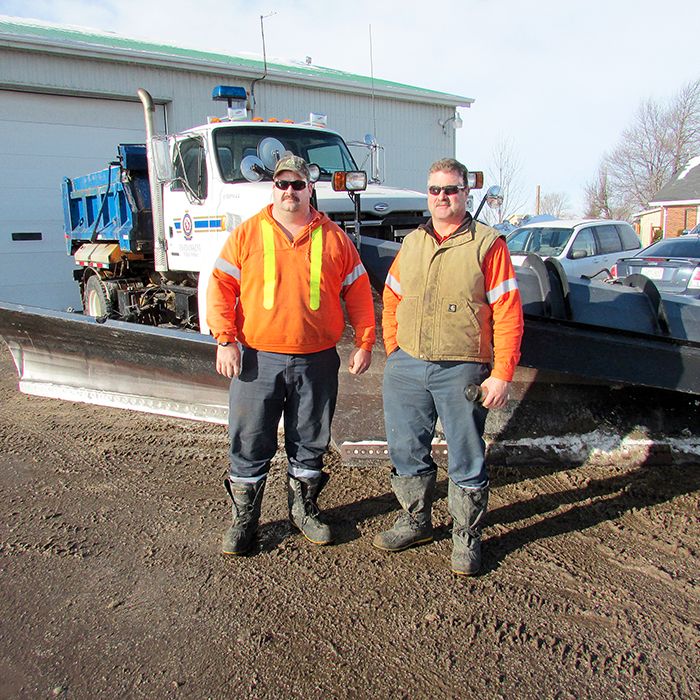 Chris Pepper, left, and Kevin Dick are part of a Public Works crew that’s become fatigued due to long hours and public criticism.

Chatham-Kent’s road warriors are tired – of the snow and the critics.

The Chatham Voice sat down with members of the Raleigh Public Works garage recently to talk about the long hours spent trying to keep the roads open in the municipality during the recent spate of storms.

These guys had been working long shifts for weeks on end. Think of doing 14 hours of white-knuckle driving, taking 10 hours off and then doing it all over again – day in and day out.

That’s the life of a snowplow driver these past few weeks in Chatham-Kent.

Despite the long days put in by crews, it seems there is no pleasing some residents. Plow drivers have to be thick skinned, as they take a beating face to face or on social media for issues that are out of their hands.

Dennis Dath, roads supervisor for Raleigh, said the criticism is just not warranted.

“The frustrating thing for us is we’re doing everything we can and you have some members of the public who comment that we’re not doing enough,” Dath said. “But it seems you’re plowing down a drift in a 50 km/h wind and the drift is filling right in behind you.”

Dath and his crew are responsible for clearing all municipal roads from Charing Cross Road to Merlin Town Line, Lake Erie to the Thames River. He said crews have been run ragged. Some of the plow drivers have actually been sent home because they’ve reached their limit on number of days worked consecutively, according to regulations.

“A lot of these guys think they should just go ahead and work all the hours, but the law is the law. You can only drive so many hours on, and you need downtime to rest,” Dath said.

The plow jockeys can’t exceed 70 hours in seven days and must have 24 hours off straight every 14 days.

“Some of these guys are working so hard they’re at their 14th day and they have to take a day,” Dath said.

The supervisor said in the Jan. 24-25 storm, it was particularly nasty along the north-south roads in the municipality. In his area, he said Bloomfield Road, A.D. Shadd Road and Merlin Town Line were hard hit.

The proximity to Lake Erie was also a factor.

“You get towards the lake, it seems like the wind and the snow pick up,” Dath said. “We had to pull the plows off the road for a few hours that night. The visibility was just zero. We’re so open with the farmland. The snow just blows.”

Dath said some people just don’t realize how hazardous it is on rural roads and can’t understand why the plows don’t instantly have the snow pushed into the ditches, regardless of the weather. The mere thought of parking the plows because of terrible conditions doesn’t sit well with those folks either. But it is for driver safety, according to plow driver Kevin Dick.

“They’re out in their vehicles and they can’t see,” Dick said. “How do they think we can see?”

Dath said visibility can be even worse for a plow driver than for the average driver.

“A snow plow, when you hit the right direction and hit the drifts, once you hit it, it’s like a wave coming over the front of the truck. Until it clears, you see nothing out of the windshield,” he said.

The blowing snow has cut visibility at times to the point it feels like the plow is going through one long drift.

Dath said when people try to drive in such conditions, it only exacerbates the snow removal problems. Cars get abandoned in the middle of the road after their drivers get them stuck in drifts, and can be buried by the time the plows return to the road.

“We get up and get going as soon as we can and we can’t do the roads because of the vehicles,” he said.

Even with the plows off the roads and warnings from the police and municipality for the public to not venture out overnight Jan. 24, some folks didn’t listen. A few wound up at the Raleigh garage.

“On the Friday, one lady who lived further down A.D. Shadd Road got to our shop. It was just impossible to get to her house,” Dath said. “She spent the night in our shop.”

He said another couple walked to the garage from their abandoned vehicle.

Dath said crews alter their plowing patterns to target whichever roads are being the hardest hit at the time, but have to check all roads to ensure they aren’t drifted in.

“And someone looks out their window and sees a plow go by on a bare road,” he said. “The plow routes are designed to have the route done once every three hours in minimal conditions. But when weather goes to extremes, that will get stretched out.”

One bad habit the plow jockeys would love to see end is citizens pushing show out of their driveways and onto the roadway. For starters it’s illegal, and it also creates a road hazard.

“People pile snow at the end of their laneway, a plow hits it and can get knocked sideways. It’s like hitting a ton of bricks,” said Dick.

The hard-packed snow can cause damage to the wing blades on the plows, he added.

The plow drivers also offer simple advice to motorists who come up behind plows – stay back.

If you pull up behind a plow at an intersection, give it some distance, as it may plow the snow around the corner a short distance to clear the intersection, and then back up to continue on its way.