Speed remains a concern on Michener 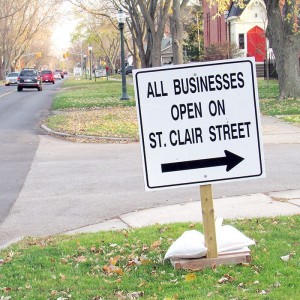 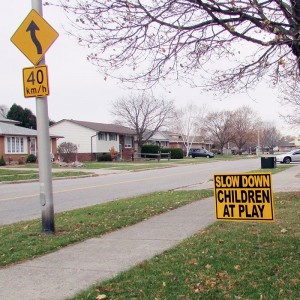 It’s been more than four months since a car flipped and rolled one night on Michener Road, but residents fear it’s only a matter of time before tragedy strikes again.

In October, residents erected signs along the road’s chicane – “Slow Down, Children at Play” – and they say they worked to control speeds on their street.

But then the municipality told residents that the signs, about the size of a typical real estate “For Sale” sign, were too close to the road and had to be moved back due to safety and potential liability concerns, as they were a distraction.

Paul Lacina, director of building enforcement and licensing services for the municipality, said the bylaw prohibits people from placing signs on municipal property unless they get approval.

The Michener residents complied with the municipal request, and they say the cars are back to zipping down the road.

Michener Road resident Jeff Brooks still has his sign up, although it is back on his lawn away from the curb, as ordered by the municipality.

“The day we moved the signs back, the speeds all jumped back up,” he said.

Brooks, who lives on the street with his wife and their two young daughters, is worried there will be another crash.

“We’ll all be standing out front and shake our heads as the cars go by – they go into the wrong lane as they wind up for the chicane,” he said. “We need some four-way stops or an actual increased police presence. I realize the police are busy, but this is just crazy. There are lots of kids in this neighbourhood.”

That’s what has Brooks concerned – the kids.

“If people want to spin down the road, that’s their own business. But if they wipe out a kid, that’s on the city,” he said.

He said it’s fortunate that the weather has turned, as there are fewer children out and about as a result.

“But the roads are really slick right now. Someone’s apt to crash.”

It is frustrating for Michener Road residents to have to move their signs back, only to see signs placed very close to the roadway along Victoria Avenue for most of the fall. While St. Clair Street between Grand and McNaughton avenues was under construction, there were signs posted along Victoria at every intersection, reminding motorists, “All Businesses Open on St. Clair Street.” These signs were placed just a few feet back from the roadway, as close as or closer than where the Michener Road residents had initially placed theirs.

Lacina said those signs were “required by the municipality to service the customers” on St. Clair Street, and were only temporary placards.

He added the municipal sign bylaw would be reviewed in the new year.

Brooks sees the need for the both sets of signs.

Brooks said it is ironic that one complaint from a driver can result in he and his neighbours pulling back their signs that same day, but “here we are with a safety issue, but nothing can be done in the time we’ve been talking about it.”

He said the entire process has him unhappy with municipal council, as several councillors spoke out in support of the Michener Road residents, but nothing has been done.

“This makes me lose faith in the councillors I voted for,” he said. “We just want a nice quiet neighbourhood. Driving 50 km/h is fine, but 65 or much higher is just not tolerable.”