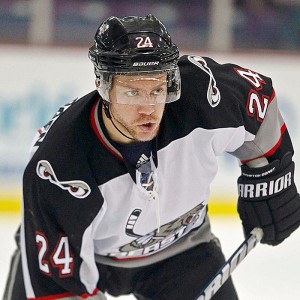 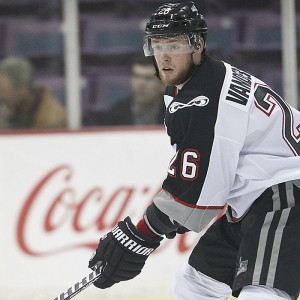 In a league dominated by teams from the American Midwest, and in an area rife with Toronto Maple Leafs fever, two local hockey players are helping the Brampton Beast carve out a niche of their own in the Central Hockey League.

Wallaceburg’s Jamie Vanderveeken, and Blenheim’s Brett Vandehogen are in their first season with the CHL’s Brampton Beast, a CHL expansion team affiliated with the NHL’s Tampa Bay Lightning and AHL’s Syracuse Crunch.

“It’s been great,” said Vanderveeken of playing with the CHL’s first Canadian franchise. “Being in an inaugural season there are a lot of new things here in Brampton. It’s nice to be back in Canada, close to home so my friends and family can come watch.”

“Brampton contacted me and it seemed like a great team and great fit and I’m glad to be here,” says Vandehogen about the opportunity to play in Brampton. “It’s the only team in the Central Hockey League and we have a 100% Canadian roster.”

Both players are happy to be playing in Canada, close to home, giving family and friends an opportunity to be at games. And both are contributing, as Vanderveeken is one of the league’s top-scoring defenders, and Vandehogen scored twice in the season’s opening game, something he will never forget.

“I was just trying to keep it simple that game,” said Vandehogen, “To score those two goals that game and to have my whole family there, it was quite an honour. I was pretty excited.”

Vandehogen, who is a certified teacher, is still learning the pro hockey game, however, and he’s glad to have Vanderveeken, a former Wallaceburg Laker, and former teammate of Vandehogen with the Chatham-Kent Cyclones, showing him the ropes.

“Veek (Vanderveeken) has been in the league for a long time. He’s kind of taken me under his wing, he’s been a great role model and showing me the ropes of pro hockey,” said the former Blenheim Blades and Chatham Maroons star.

Despite his role as mentor, Vanderveeken was also full of praise for his fellow Chatham-Kent athlete.

“It’s nice to see Brett here,” says Vanderveeken, who spent last season with Rapid City and Missouri of the CHL. “He’s in his rookie year, he went to Windsor University and played. He’s doing a great job for us and it’s great to have a familiar face on your team.”

The duo have helped the Brampton Beast to a strong start this season, and are now hoping to help grow the team’s popularity in a hockey mad region.

“The Brampton Battalion were there before us in the OHL. Now with us being in the CHL, our fan base is pretty good,” explained Vanderveeken. “Now with a Central Hockey League being here, and being affiliated with the Tampa Bay Lightning, it’s catching a lot of people’s eyes, and the fan base is starting to come around. It’s great to have the support.”