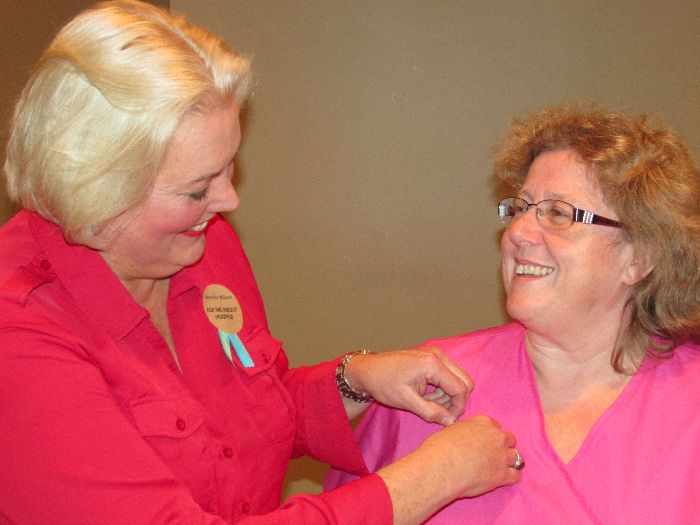 Dozens of local residents turned out Thursday afternoon at Aristo’s Banquet Room to show support for a proposed hospice in Chatham-Kent, including a woman who knows first-hand the value of compassionate end-of-life care.

Elizabeth Hitchcock, whose late husband Lyle died in October, signed on as a volunteer and made a memorial donation to the project.

Lyle, owner of Earl E. Austin and Son appliances, was diagnosed with a brain tumor and spent his last two weeks at the Hospice of Windsor.

“When we found out Lyle’s condition was terminal, we spoke about what he wanted,” she said. “He said that he wanted to stay home until he needed more care than we could provide and then he wanted to go to a hospice. He was always thinking of us.”

Elizabeth said Lyle’s condition was erratic because of the nature of his condition.  “He would be fine one day and then extremely difficult the next,” she said.

Even with support from the Community Care Access Centre and personal support workers, the ordeal became exhausting. “We were spending all our energy and time just trying to meet Lyle’s physical needs. It made it difficult on everyone.”

Once Lyle was admitted to the hospice, the family was able to spend time reminiscing and sharing their last two weeks while staff took care of his needs.

“The staff was wonderful, they all were happy to be there. They treated us with dignity and Lyle with dignity.”

Chatham-Kent Counc. Derek Robertson has given a notice of motion to approve up to $1.5 million in matching funds to the hospice committee beginning in 2015.

The Local Health Integration Network has approved operating funding for the proposed 10-bed facility, which will be located next to St. Andrews Residence.

Robertson said there were some initial mixed thoughts from his fellow councilors but he does detect a groundswell of interest.

“It doesn’t seem right that local residents are denied this end-of-life care unless they’re prepared to drive to neighbouring communities such as Sarnia, Windsor or Woodstock,” he said.

Elizabeth said all it would take is for one council member to have had a loved one experience what a hospice can mean to have the funding approved.

“If just one of them sees it, they would know (funding approval) is one of the most important moves they could make.”

Hospice board Chair Jennifer Wilson said the information event attracted many new faces. “We’re seeing there is a lot of interest in the hospice. We’ve had six memorial donations today alone. This is important to a lot of local residents.”