You’ve likely heard of flash mobs, but how about a flash crowd?

That’s exactly what happened on a crisp evening last week at Fergie Jenkins Field at Rotary Park in Chatham. About 150 people showed up to cheer on the Children’s Treatment Centre season-ending Challenger baseball game between White Lightning and Purple Crush, to the delight of the kids, and their parents.

The concept was the brainchild of Candice Jeffrey, the communications and fundraising co-ordinator for the Children’s Treatment Centre Foundation of Chatham-Kent. She actually admitted to me she at one point feared no one would show up, but I just laughed at her.

Mike Genge, a board member for the foundation, said Jeffrey’s notion was brilliant.

“When Candice came to us with this idea, we thought, ‘This won’t be hard,’” he said, referring to the traditional surge of support by this community.

Great idea, and typical great Chatham-Kent support. Folks from several local corporations, including Entegrus and Union Gas, took part. The Ursuline College Chatham cheerleaders worked their magic. Staff from the local radio stations attended. And so did several staff and their families from The Chatham Voice.

Why not? We had the opportunity to surprise a group of kids and cheer them on.

The flash crowd was meant to be a treat for the kids playing the game, but in reality, it was just plain fun for everyone.

“What an amazing feeling tonight, to be a part of the flash crowd,” said Michelle Owchar, graphic designer for The Voice. “It was definitely a night to remember and even better to share it with my family and my Chatham Voice family.”

My wife and daughter hope this turns into an annual event. Yes, it was that much fun to get the stands rocking, as folks clapped, cheered, stomped their feet and generally made the kids grin from ear to ear.

People brought giant foam hands, Hub Creative Group printed off “Go Team!” signs (in Detroit Tiger colours, hmm), which were distributed throughout the crowd, and some folks even had noisemakers.

Sarah Regnier of Entegrus went so far as to borrow the bowling pins of her nephew’s Fisher Price bowling set and use them as shakers (great idea, by the way).

CKXS morning man Greg Hetherington did a great job calling the game over the public address system, entertaining the crowd, the kids and their parents.

Brooklyn Roebuck sang “Take Me Out to the Ball Game” to start off the fun.

To put things in perspective, last year’s game saw little more than a dozen people on hand to watch from the stands.

And this time around, they didn’t know it would be any different . . . until Hetherington’s voice boomed out to announce that a few people wanted to watch the game and we walked in en masse.

The kids responded to the support, actually playing it up to the crowd at times.

“I loved the fact the kids were putting on a show for us because they were so excited,” Owchar said.

Some knocked dirt from their shoes when they came up to the plate. Others gave big smiles and thumbs up to the crowd. And some of the boys really appreciated the support of the cheerleaders.

Carson Grail led the way. When he scored in the first inning, he ran over and appeared to be flirting with the cheerleaders – all of them – on his way back to the dugout. Hilarious.

This spurred on the cheer squad and they went from being behind the screen to beside the dugout, high-fiving all the kids who came around to score.

I think their arms got sore by the end of it, as the high-scoring funfest ended in a 27-27 tie.

But they weren’t too tired to greet spirit award winner Quinn Chapman, who after learning he’d won the award, went over and hugged each cheerleader.

“What a big difference compared to last year,” Paquette said.

“This is unbelievable,” Weaver said. “The kids, they’re just beaming!”

After the game, as the sun settled in the clear western sky, the smell of hot dogs greeted player and fan alike. A typical ballpark staple – a fitting end to a fun night at the old ball game. 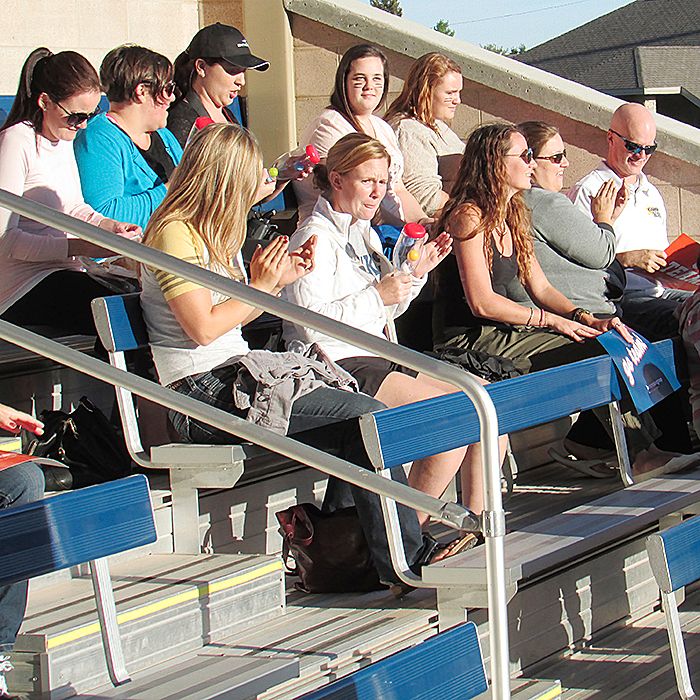