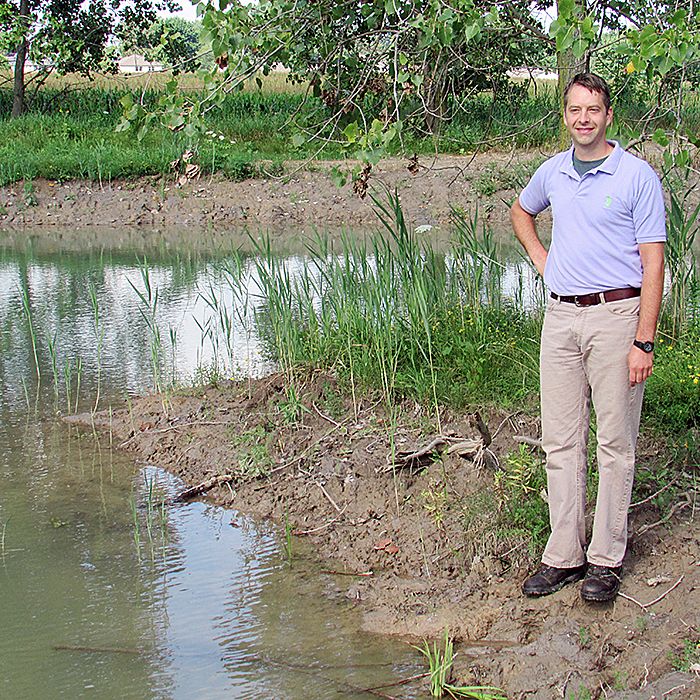 Sometimes scientific and ecological decisions can be quite simple. Just ask Randall Vanwagner, the environmental project co-ordinator for a greening partnership between the municipality and the Lower Thames Valley Conservation Authority.

He said the decision to put in a pair of ponds and create a native wetland area near Creek Road in southeast Chatham was quite easy. Vanwagner admitted an invasive species spotted near the McGregor Creek diversion channel led him to choosing the area for wetland restoration.

“I just followed the phragmites, an invasive grass that lives in wet ground,” he said.

So, rather than try to reforest the area, he opted instead to create a wetland area.

“Whenever we do a restoration project, we look at the soil conditions and what was here historically,” Vanwagner said. “There were no trees here, so why fight nature? Instead, we’re working with it.”

The $10,000 project – which also involved Ducks Unlimited and Stewardship Kent – began in earnest in May, when workers excavated the ponds.

Vanwagner said Union Gas employees helped with the project, physically and financially, as a team showed up on site to assist, while money went towards the purchase of native wetland plants.

The wetlands will attract all sorts of wildlife, from wild turkey to deer to wood ducks, heron and fox snakes, he said.

With Wolfe Creek and the diversion channel nearby, the area is an outright magnet for such creatures.

As we drove along the edge of the McGregor Creek diversion channel, we had to pause for some of that wildlife. A group of young wild turkeys popped out of the underbrush and scuttled across the road towards the diversion channel.

The area will also attract people.

“It’s close to town. Kids can come out here and explore,” Vanwagner said.

While providing a haven for wildlife and recreation zone for humans, the ponds will also improve area groundwater.

“We’re capturing this runoff rather than let it go into the diversion channel and ultimately into the Thames River,” he said. “When the plants mature, this area will behave the same as a sponge, soaking up the moisture and nutrients. It will act as a cleanser.”

Wetlands capture water, filter out the sediment and contaminants (which bacteria then goes to work to break down) and slowly release cleaner water into the surrounding soil.

As the work continues to plant native species, such as cattails and Indian grass, near the ponds, efforts are also underway to kill off the phragmites, which have extensive root systems and grow quite quickly.

Considering the thick clusters of phragmites, this may take some time.